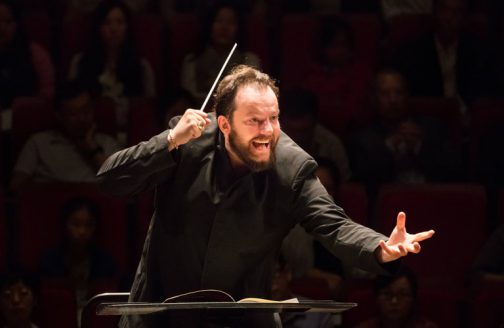 Boston can look forward to some major concerts. In late October, the Leipzig Gewandhaus Orchestra will round off Germany Year 2018/19 in the US with three joint performances with the Boston Symphony Orchestra (BSO) at Boston Symphony Hall.

The close collaboration between the two world-famous orchestras under joint principal conductor Andris Nelsons is illustrative of the Germany Year motto of “Wunderbar Together.” The musicians have been building a cultural bridge across the Atlantic, exchanging ideas, learning from one another and showcasing the results of their cooperation to delighted audiences.

The close bond between the two prominent ensembles draws on a long tradition. George Henschel, the BSO’s first principal conductor from 1881 and 1884, had been a student at the Leipzig Conservatory. One of his most famous successors, Arthur Nikisch, conductor of the BSO from 1889 to1893, worked as music director at the Leipzig Opera before his time in Boston and then returned to Leipzig in 1895 as Gewandhaus musical director, a position he held until his death in 1922. And Charles Munch, who headed the BSO from 1949 to 1962, was concertmaster at the Leipzig Gewandhaus Orchestra in the 1920s.

But above all, the Boston Symphony Hall, which opened in 1900, is virtually a reproduction of the second Gewandhaus from 1868, the unique acoustics of which were world-renowned. The original building in Leipzig was severely damaged during World War II and later demolished, although an inkling of the former listening experience remains alive to this day in Boston Symphony Hall.

In 2015, Gewandhaus director Andreas Schulz was in a position to build on all of these historical commonalities when he reached out to Andris Nelsons in the search for a successor to Gewandhaus conductor Riccardo Chailly. Just one year earlier, the Latvian star conductor had taken up his post as chief conductor of the BSO, where his fresh, downto- earth energy was received with great enthusiasm. “Our first cautious requests to Nelsons and the BSO focused above all on developing a vision for something that is entirely new in the international music industry,” says Schulz.

In the conversations with Mark Volpe, his counterpart at the BSO, he was quick to reassure him that Leipzig would not be taking anything away from the orchestra in Boston, but on the contrary would have something to offer: a genuine partnership in which artistic ideas and musical visions could come together on both sides of the Atlantic. Andris Nelsons was excited about this perspective from the word “go,” after which there was little else standing in the way of the “alliance” between the two orchestras, which is being organized under the motto of “two worlds – one music” and was formally signed at the beginning of 2018.

The alliance has numerous facets. “On the one hand, the orchestras jointly commission and then perform new works from contemporary composers,” says Schulz. This approach is opening up new horizons for both institutions. Yet the collaboration has also enabled both musical institutions to highlight their historical reputation as important venues for premiering major orchestral works, Leipzig most notably in the 19th century and Boston in the 20th century. “On the other hand, with Boston Weeks in Leipzig and Leipzig Weeks in Boston, we are presenting the history of the two traditional orchestras with special concerts and lectures,” says Schulz.

The heart of this collaboration, however, is the coming together of the musicians. “We have arranged that either one or two musicians can be guests in the other orchestra for up to three months, and there are already long waiting lists on both sides,” reports Schulz.

In the US, the Gewandhaus musicians will experience a far more rigorous rehearsal and concert schedule and are immersed in a significantly different repertoire. For the guests from Boston, on the other hand, taking part in the Leipzig Opera or the cantata concerts by the St. Thomas Choir is an entirely new experience. Moreover, the musicians must familiarize themselves with the specific sound of the respective orchestras, which is an adjustment for everyone at first, but is ultimately highly instructive.

In addition to the members of the orchestra, young musicians from the two conservatories are also involved in the exchange program. Students from the Mendelssohn Academy in Leipzig and the Tanglewood Music Center in Boston are given the opportunity to delve into other teaching traditions and procedures. For instance, the Gewandhaus commissions an orchestral work from a participant in the Composer Masterclass in Tanglewood, which is then premiered in Leipzig by a young conductor from Boston. Each new exchange fortifies the network between Boston and Leipzig.

Beyond this professional collaboration, friendships have long since developed between the musicians of the two orchestras. The BSO toured in Leipzig in 2016 and 2018, and now the Gewandhaus Orchestra is traveling for the first time to the East Coast of the United States for a joint working session lasting about a week.

Many of the Leipzig musicians have already been invited to visit their colleagues in Boston during this time, and some will even enjoy a stay with their musician friends instead of at the hotel. “There’s a lively email exchange between the members of both orchestras, and city tours and parties are being organized. We’re delighted with how the cooperation is being brought to life by the musicians,” says Schulz.

The highlight of the Boston residency will be the three concerts that will see musicians from both orchestras perform on stage together. Andris Nelsons will work with them on what is in many respects a brilliant and challenging program, with works by Richard Strauss (Festive Prelude Op. 61 for Large Orchestra and Organ), Joseph Haydn (Sinfonia Concertante for Oboe, Bassoon, Violin, Cello and Orchestra in B-Flat Major, Hob. I:105), Arnold Schoenberg (Verklärte Nacht, Op. 4) and Alexander Scriabin (Le poeme de l’extase for large orchestra, Op. 54). All in all, it will make for resounding fanfare at the conclusion of Germany Year in the US while showing that “Wunderbar Together” will not be coming to an end, but will continue in the collaboration between Leipzig and Boston, and in numerous other locations. 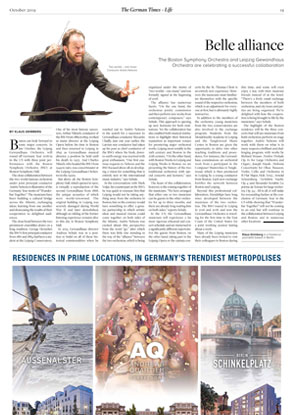