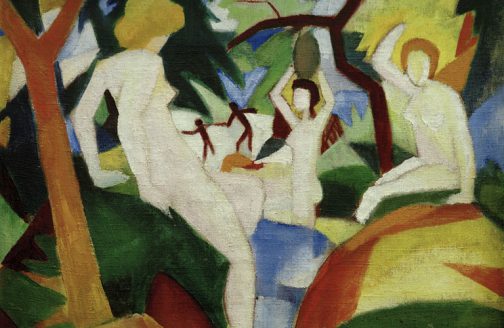 This summer, two German news stories made global headlines. One was an animalistic crime story, an attempted robbery; the other was a tale of protest, aimed at the increasing commercialization of world soccer. They had one thing in common – their protagonists were naked.

In the first week of August, a nude sunbather at Teufelssee lake in southwest Berlin was the target of an attempted “snout and run” when a wild boar snatched his bag and made a dash for the nearby forest with her two piglets in tow. As the bag contained his laptop, the man gave chase in his birthday suit to the amusement and applause of other bathers. Adele Landauer, a Berlin-based life coach, took some photos, posted them on Instagram with the naked boar-chaser’s permission and blew up the internet.

Around a week later, two soccer teams in the town of Oer-Erkenschwick in the western German state of North Rhine-Westphalia decided to stage a protest against the dominance of money in the beautiful game by playing a Sunday match completely naked. Well, almost – they did wear soccer shoes and color-coded socks to separate the teams. The players’ numbers were hand-painted on their backs.

Artist Gerrit Starczewski organized the game. “With my nude actions, I also want to set an example for diversity and naturalness and against the dependence and influence of social media and false ideals of beauty,” Starczewski said.

Both the shaggy-boar story and the freeballing footballers serve to reinforce a commonly held belief about Germans: that they like to get naked in public. What the rest of the world calls nudism or naturism, the Germans call Nacktkultur (naked culture) or, more often, Freikörperkultur (free body culture) – FKK for short.

The culture – some would say cult – of FKK is practiced at special “textile-free” beaches, lakes, naturist resorts and camping sites and even in specially designated sections of downtown parks in major cities. The English Garden in Munich and the Tiergarten in Berlin are two of the most famous parks in Germany with nude areas. On summer days, naked sun worshippers can be found spread out on the grass, often to the shock of unsuspecting tourists from more sartorially retentive nations.

The modern German nudist movement was the first worldwide, with the first Freikörperkultur club founded in the city of Essen in 1898, marking the start of an increased acceptance of public nudity in Germany.

The FKK movement is based on an attitude toward life where the naked body is not a source of shame. It promotes concepts of physical fitness and vigorous health. The German naturists aimed to de-eroticize the naked body, which they did not regard as sexually provocative in itself. They believed that civilization had taught us to look upon nudity as sexual. But the idea of getting your kit off to liberate yourself was still somewhat revolutionary in the late nineteenth century.

From the 1920s onwards, the FKK movement became well established in Germany and gained prominence for its utopian ideals. The first nude beach in Germany was established in 1920 on the North Sea resort island of Sylt.

The movement became politicized by radical socialists who believed that not having any clothes on would lead to the dissolution of society’s rigid class-based structures. It also became associated with pacifism. So when the Nazis came along, they banned it, of course.

In March 1933, Prussian interior minister Hermann Göring, later to become the head of Hitler’s Luftwaffe, passed laws limiting mixed-sex nudism. Although the Nazis approved of the fresh air and exercise aspect of FKK, Göring opined that it “should be disapproved of as a cultural error. Among women, the nudity kills natural modesty; it takes from men their respect for women.”

Following the defeat of the Nazis, FKK persisted in both halves of divided Germany, but it was particularly widespread in communist East Germany, where being able to get naked at the beach or on the shore of a lake was as good a way as any to escape the restrictions of an otherwise repressive and economically limited state.

When the Berlin Wall fell in 1989 and Germany was reunited a year later, attitudes to FKK became something of a signifier of former East and former West German Weltanschauungen. Many East Germans were unhappy when some formerly “textile-free” beaches became “textile-only” to accommodate what they saw as the more prudish attitudes of bourgeois West Germans.

Former East German politician Gregor Gysi says the relaxed East German way of dealing with nudity was lost after reunification. Harking back to the aims of the nineteenth-century FKK adherents to desexualize the human body, Gysi blames the “pornographic gaze” of Westerners after reunification for destroying the pleasure of nude bathing. “FKK culture has a long tradition in Germany,” Gysi says. “Partly, it also had ties to the workers’ movement. In East Germany, FKK beaches on the Baltic Sea were the norm.”

Intra-German cultural clashes aside, the frequency of nudist beaches on the Baltic Sea also led to some international misunderstandings. After Germany’s neighbor Poland joined the European Union, it became easier to walk along the shared coastline from one country’s beaches to the other’s. But nudism was a cause of occasional tensions between the mostly Catholic and often socially conservative Poles, on the one hand, and the more liberal Germans on the other.

Around one-third of Germans admit to having been naked in public, according to a 2014 survey by travel firm Expedia, which dubbed Germany the world’s most tolerant country when it comes to nudity. Still, with regional and municipal bans on public nudity becoming more frequent, some advocates of nudist culture fear FKK could be on its way out. Only 45,000 Germans are members of organized FKK clubs today, according to Kurt Fischer, president of the German FKK Association. But he says another seven million can be considered Nacktkultur aficionados, happy to regularly strip down at the beach or the lake or the park.

Yet the 2020 COVID-19 pandemic has one upside for FKK fans. Many can now go naked at work – as long as they’re in home office.

Killian Lannister
is a freelance journalist based in Berlin. 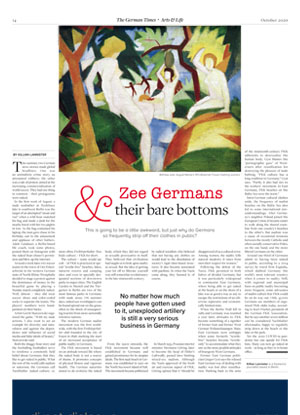