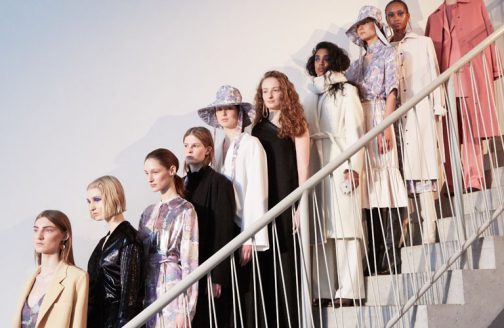 On the eve of Berlin Fashion Week, a group of bloggers, journalists and Berlin celebrities have gathered at Colette, the brasserie run by star chef Tim Raue. They were invited by Vreni Frost, one of Berlin’s first and foremost fashion bloggers. There’s boeuf bourguignon and nougat mousse, and it just so happens that Sahra Wagenknecht and Oskar Lafontaine – a powerhouse left-wing couple and two of Germany’s most famous political personalities – are sitting at the next table. And, as so often is the case when fashion professionals gather among themselves, what would in any other setting be an innocent question – “So, are you all looking forward to Fashion Week?” – ends up triggering an hours-long debate.

Of course, everyone is looking forward to Fashion Week. For the most part, at least. After all, a whole new and refined designer scene has established itself over the past several years in Berlin. It’s a scene shaped by young people adept at drawing attention to their work through good ideas and idiosyncratic imagery, which is essential in the age of Instagram. William Fan, for example, has long since been a darling of the fashion press for his casual collections that function as something between workwear and couture. Fan almost always stages his shows as a form of conceptual art, setting up runways in such varied locations as a Chinese restaurant or a Zen garden. Among the other designers who made the leap from young talent to major player on the fashion scene are Marina Hoermanseder, Malaikaraiss (see picture), Rianna+Nina and Dawid Tomaszewski.

German bloggers and fashion editors look upon “their” designers with a heavy dose of good-natured pride. They see themselves as obliged to give the Berlin fashion scene all the journalistic support they can, all the while nervously watching the evolution of Berlin Fashion Week, which was launched in 2007 and has taken place twice a year since. In the beginning, the event was jazzed up and promoted as a veritable alternative to the big shows in London, Milan and New York. But it never achieved the success it was intended to have, especially as its dates in January and July almost always overlap with the couture shows in Paris and other important international fashion fairs. It was pure folly to expect those key guests – buyers for large department stores – to make an extra trip to Berlin to catch a glimpse of a few junior labels and C celebrities.

These days, Fashion Week Berlin comes to us in a more modest form. Basically, the most important trade fairs, such as the Premium, Panorama and Seek, are garnered with additional shows and events lasting only three days. Gone are the days of the pumped-up celebrity hype associated with the tent at the Brandenburg Gate, which was abandoned after the event’s main sponsor, Mercedes-Benz, withdrew in 2018. Organizers have experimented with different concepts and key show locations, such as the Eisstadion Wedding (a skating rink) and an unused department store in Mitte, only to discard them for something new. Even the “Berliner Salon,” a group exhibition held at the Kronzprinzenpalais Unter den Linden, where young, unknown designers were able to show their collections to the trade press and buyers, has now been dissolved; the founders of that exhibition, German Vogue editor in chief Christiane Arp and event manager Marcus Kurz, announced in March 2019 that they had not been able to develop the format in a competitive way.

Fewer shows, less hype. In other words, after its first semi-successful iteration, Berlin Fashion Week is starting over again from scratch. The question now occupying the fashion cosmos is: What, if anything, remains? We know what Berlin fashion is capable of, but how do we get the word out to the rest of the world without any noteworthy, large-scale fashion event to speak of? How can Berlin assert its position as a fashion capital? These questions revolve not only around how many Fashion Week parties and cocktail receptions have to be canceled; the issue is a far more existential one: How to draw the attention of international buyers, those department stores and boutiques in London, Paris and Singapore, to German brands?

Fashion Council Germany – a lobbying body populated by various industry players (editors-in-chief and economic associations) that also supports select labels through elaborate funding programs – hopes to gain assistance from policymakers. The Fashion Council’s oft-repeated mantra is that “fashion must finally be acknowledged as a cultural and economic asset in Germany.”

Fortunately, the Fashion Council has found in Dorothee Bar, State Minister for Digitalization, a contact within the government willing to commit to the fashion industry. In fact, last year she even invited a delegation from the Berlin fashion scene to visit the federal chancellery, where Angela Merkel just happened to stop by. In January 2019, Bar also held a pep-talk at a roundtable discussion organized by the Fashion Council and Icon magazine where she assured listeners that supporting the fashion industry was indeed one of the federal government’s priorities – even if the act of associating with fashion lobbyists was still considered a bit suspicious in Germany: “Some of my colleagues prefer to sit down with the nuclear lobby.” Bar’s tip to fashion industry representatives is to spotlight themselves more effectively and take even better advantage of the opportunities provided by digitalization.

To be sure, Instagram has completely transformed the fashion industry in recent years, with directto-consumer communications already becoming an integral part of many labels’ business strategy. Especially for small companies, this opens up entirely new opportunities, because they can attract a highly fashion-conscious community without having to invest in expensive exhibition stands or pay rent for a boutique.

The Berlin shoe brand Aeyde, for example, orchestrated its success story on the internet. The company was founded in 2015 by Luisa Krogmann and Constantin Langholz-Baikousis, two industry veterans who learned their craft at the largest German fashion startup, Zalando. Leveraging digitalization to scale their company from the start, they first built a functioning online shop and then worked on Instagram with major fashion influencers like Camille Charriere and Lucy Williams. After that, the doors to those highly competitive sales areas in major European concept stores opened up automatically.

In fact, there are many young Berlin labels that have Instagram to thank for their success: Jeanne de Kroon, founder of Zazi Vintage, has her upscale hippie dresses sewn by women in NGO projects in such places as Uzbekistan, India and Afghanistan; Marke GmbH (German for: brand) – yes, that’s the firm’s name – made the leap to the pret-a-porter shows in Paris with its underground aesthetic; the jewelry designer Lilian von Trapp brought her sustainable gold jewelry to actress Emma Watson via the internet; the founders of Wald Berlin rescued pearl jewelry from its old-fashioned reputation; and the grande dame of the Berlin fashion scene, Leyla Piedayesh, led her label Lala Berlin to international splendor with the help of 100,000 Instagram followers.

The closely networked Instagram scene has produced a regular stream of viral fashion hypes that now shapes the external perception of the “Berlin Look.” Such phenomena take their inspiration from the city’s vibe, that is, a way of life that continues to make Berlin a place so many people want to be a part of thanks to its club culture, the intellectual boheme, the clash of milieus and mentalities – all of which, taken together, inspire the fashion scene. Issues such as sustainability and fair production are also on the minds of many labels. Plus, Berliner style is never limited to just being “edgy,” as they say in the fashion world; it always embodies the city’s current zeitgeist as well. Recently, for example, the EU-nify hoodie created by the artists collective known as Souvenir made a splash on the internet. The blue sweatshirt features the EU circle of stars with one star missing – a conscious challenge on behalf of the designers to get their fans to reflect on European identity. The hoodie was worn by hip Louis Vuitton designer Virgil Abloh as well as by Germany’s Minister of Justice Katarina Barley.

To this day, coolness continues to be the Berlin fashion scene’s greatest capital. And, in keeping with its nature, the biggest and most successful trends make do without institutionalized events. In fact, it’s possible that the creative drive and ability of Berliners to turn ideas into good business models is thwarted only by too the excesses of wellmeaning patronage. Those who rely too much on help from above can end up paralyzing themselves. And even Fashion Council Germany can’t afford to offer anything more than help with self-help.

While it’s true that many Berlin designers and labels still operate on a small scale, this isn’t necessarily a bad omen. On the contrary, the era of large major German fashion brands that helped shape the fate of the international fashion scene is long gone. These days, digitalization offers incredible growth opportunities that are better suited to small and agile startups rather than lumbering corporations.

At the moment, Berlin is witnessing the emergence of a highly modern fashion middle class. The hipster attitude of many other projects should not distract us from this fact. Berlin design is making its way upwards. Taking a number of unexpected detours, it’s slowly but successfully staking its claim in the international fashion scene – with a work ethic resting on medium-sized company values and access to good Wi-Fi. And no worries, there are still more than enough parties, pop-up store openings, dinners and panel talks going on outside of the erstwhile Fashion Week schedule – places and spaces where fashion professionals can continue to do their “networking.” There’s no need to fear that Berlin will run out of events any time soon.

Julia Hackober
is deputy director at Iconist.de, a digital lifestyle magazine belonging to the Welt Group. 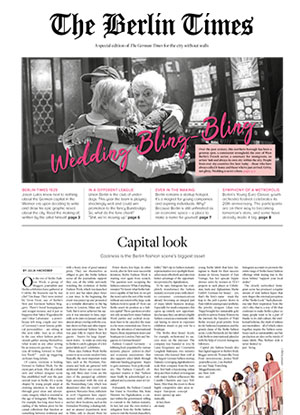