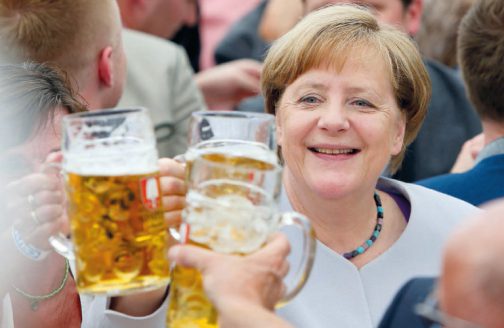 The times when we could fully rely on one another are more or less over, so I can only say that we Europeans must take our fate into our own hands.” It was a rather uneven remark, but one that nonetheless resounded like a thunderbolt throughout the Western world. It came from German Chancellor Angela Merkel in a 20-minute speech on a hot Sunday afternoon over beer and pretzels in the Munich suburb of Trudering. It fell from her lips almost casually, but make no mistake: it was deliberate.

In Germany, many took the statement as a rebuke to the new US President Donald Trump and a reaction to his performance at the NATO summit in Brussels a few days earlier. But how was the chancellor’s message received out­side Germany? The world’s most renowned newspapers – from The Washington Post and The New York Times, from The Guardian and The Economist in Great Britain, and from Spain’s El País and Libération in France to La Repubblica in Italy – all deemed Merkel’s speech “historic.” Hers were blunt words marking a profound turn­ing point in the trans-Atlantic partnership. A new chapter in US-European relations had begun.

European-American ties have indeed changed. Trump’s presidency has dramatically accelerated this process, but it did not initiate it.

During the Cold War, when the two nuclear powers – the US and the Soviet Union – held one another in check through a strategy of mutual deterrence, in which the Americans acted as patron saints for the Europeans. This logic also laid the groundwork for NATO. It meant that a certain amount of security in the West would essentially be trusted to the US in the form of nuclear deterrence. Nevertheless, the Europe­ans achieved quite a lot themselves in terms of security. They supplemented American guarantees with comprehensive contributions of their own. The Bundeswehr, for example, was considered a capable and highly respected army.

This balance changed with the end of the Cold War. Defense expenditure was massively reduced all over Europe as the Soviet Union no longer posed a threat to the West. However, this led to today’s situation where many European armed forces are operational only to a limited degree.

With each passing year, leading US politicians found it more dif­ficult to explain why the US spends immense sums for the defense of its European partners, while these partners continued to reduce their share in the collective burden of defense.

In June 2011 – that is, long before Trump – US Secretary of Defense Robert Gates delivered a much-noticed speech in Brussels. He had previously warned that NATO was in jeopardy of splitting into two camps: one engaging in low-risk peacekeeping and development missions, and one carrying out high-risk combat operations. It was not acceptable that the US share of NATO defense expenditure had grown from 50 percent to now 75 percent, Gates warned: If this were to continue, decision-makers in the US would soon pose the question of whether America’s engagement in NATO was still worth it. “Ultimately,” concluded Gates, “nations must be responsible for their fair share of the common defense.”

It was not a threat, but rather a cautionary observation. But even Gates could not have foreseen how quickly a US president, namely Donald Trump, would be elected and actually refer to NATO as “obsolete”; and that he would openly threaten to honor America’s alliance obligations only if NATO member countries began paying 2 percent of their GDP for their defense, as they had pledged to do in 2014. At the moment, only a few countries have met this commitment. Germany, which currently pays at a rate of 1.2 percent, has pledged to reach 1.5 percent by 2025.

It is incumbent upon critics of the Americans to acknowledge a few basic facts: For decades the EU countries, above all Germany, have cozied up under America’s protective umbrella. Without the United States, there would have been no German reunification, no European Union, no peace in Europe and certainly no peace in the Balkans.

This begs the question: Is America still able and still willing to act as the patron saint of Europe and beyond, and – in the sense of its European partners – to continue performing its former duties as peacekeeper?

Trump’s lack of esteem among alliance partners and his style of diplomacy – which seems to breed uncertainty – makes the world more dangerous, as trust has been an early casualty, creating an atmosphere where crises can escalate faster and more sharply.

By openly attacking the European NATO members, above all Germany, from the very first minute of the Brussels NATO summit in July 2018, he has damaged the West’s most important alliance. In doing so he called into question its very foundation – its internal cohesion. “America first” has indeed become American policy.

In principle there is nothing wrong with this tack, but Trump has implemented this policy as if were not “America first,” but rather “America alone,” with the natural corollary: “Europe alone.” Whether Trump’s commitment to NATO – which he half-heartedly expressed in a press conference on July 12, 2018 – will have legs is anyone’s guess. We Europeans, at least during the Trump era, will have to get used to the idea that the White House is no longer interested in alliance partners in any way, shape or form. The world, from its perspective, is divided simply between fans and foes.

Since 1945 we have faced US presidents with varying ideologies and widely differing sets of priorities, yet all were convinced that the liberal international order, as it emerged after World War II and spread wider after the col­lapse of the Soviet Union, was good for the US, good for its partners and good for the world: multilateralism and cooperation, open societies and open markets, and close ties between the Western democracies.

Trump sees things in a fundamentally different way. No one should look to him for great initiatives to strengthen or stabilize the international order. On the contrary: Power politics and national interest are the focus of his intentions. His view dictates that America should not commit or adhere to institutions or norms while pursuing a protectionist economic policy.

Over the past year the US has withdrawn from UNESCO and pulled out of the Paris climate agreement and the Trans-Pacific Partnership (TPP), a large trade agreement between the Asia-Pacific countries. In May 2018, Trump terminated the nuclear deal with Iran.

With the US retreat, the continued existence of the nuclear agreement looks more than uncertain. Although the three European partners – Great Britain, France and Germany – have affirmed a will­ingness to adhere to the agreement and to seek dialogue with Iran, their chances of success are meager at best. Not only is Trump’s decision dire for the stability of the Middle East and in terms of the peril of a regional arms race, it also delivers a heavy blow to trans-Atlantic relations. Angela Merkel did not mince words on the subject: The cancellation of the agreement injures trust in the international order.

Richard Haass, who called it “the great abdication” of the US, a voluntary surrender of responsibility. Or, as formulated on Twitter by Strobe Talbott, former US deputy secretary of state: “Britain is only exiting Europe. America is exiting the world.”

For this reason, it is more imperative than ever before that Europe becomes more capable of acting. And I concur: It is not politically sustainable in the long term that 500 million prosperous Europeans outsource essential elements of their security to the Atlantic partners on the other side of the ocean. In this respect, we must energetically seize the topic of security with our own hands. Europe must become more able to act, speak with its own voice and continue its development into a defense union.

However, here comes the big “but.” Strengthening the capacity for action is one thing, cutting the umbilical cord is something else altogether. Cutting the cord won’t do. Those wishing to simply write off the US as a partner would be wise to remember three things:

First, in the short and medium term, Europeans cannot do without the American nuclear security guarantee. We have an abiding interest in convincing the new government in Washington of the importance of a unified and peaceful Europe, as well as the value of the US contribution to this end.

Second, it is not as if all over the world partners are queueing up to join Europe in defending the liberal world order. The EU may agree with China that a new era of protectionism would be harmful and that climate protection is important, but the similarities stop there. In the long term, the liberal world order will only endure if it is supported by both pillars of the trans-Atlantic partnership.

Third, we would be ignoring the many millions of Americans who did not vote for Donald Trump. Engagement in civil society in the US and the reactions of the US judiciary show that the America we know and treasure is well-fortified. Rather than abandoning the United States wholesale, we should work together with all those who are interested in preserving the trans-Atlantic community of shared values. These include many congressmen and congresswomen, state governors, CEOs and civil society.

Europe must become more independent yet cannot write off its alliance with the US. So, what to do? Engage, engage, engage!

Stay involved and exert influence! There’s no other way than to engage with the new US government as closely as possible without whitewashing troubling developments – even if it’s hard for many Europeans to stomach. This is precisely the necessary Realpolitik of today. 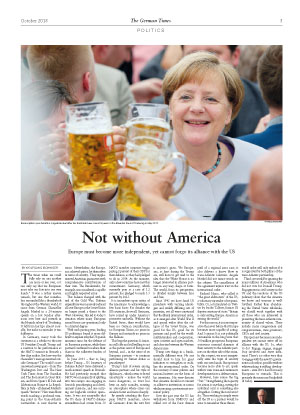