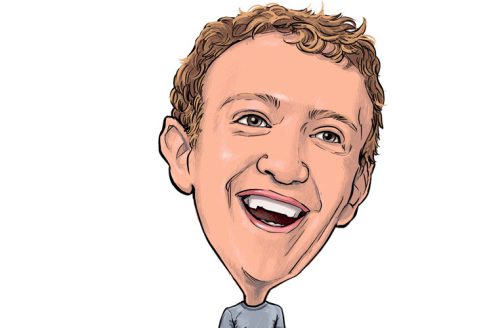 It was a loud and crashing warning shot: On Feb. 7, 2019, Facebook’s business model came under harsh criticism from the Bundeskartellamt, Germany’s Federal Cartel Office, which argued that the online giant was abusing its market position by collecting and exploiting the data of its users on a large scale. The antitrust office ordered Facebook to undergo an internal divestiture, meaning that the company would have to gain the explicit consent of its users when seeking to collect and link user data from its own suite of services as well as from third-party websites.

Facebook reacted immediately, announcing that it would contest the decision of the anti-monopoly office. This is not a surprising move considering that the restrictions would throw a big wrench into Mark Zuckerberg’s plans for the future.

Just a few days earlier, the 34-year-old Facebook founder had announced plans to unify the technical infrastructure of its messaging platforms – WhatsApp, Instagram and Facebook Messenger – by the year 2020. This would result in the world’s largest social network comprising around 2.5 billion people, that is, roughly one-third of the global population.

Zuckerberg is thereby pursuing one goal above all: these interconnected services will serve to further enlarge his wealth of data. At the same time, Facebook would be well-poised to finally take on a monopoly position; indeed, according to the cartel office, Facebook enjoys a market share of roughly 95 percent in Germany.

Elsewhere, former competitor Google+ has just thrown in the towel, and YouTube, Twitter, Snapchat, LinkedIn and Xing cannot match Facebook. In other words, if users want to interact with one another online, they will hardly be able to get past Zuckerberg’s digital ecosystem.

Still, Facebook isn’t the only digital powerhouse in the European market. Google covers 90 percent of the search engine market, and Amazon already commands nearly two-thirds of the online book trade.

The “platform capitalism” (Nick Srnicek) of these digital giants has its greatest impact on traditional sectors. For example, taken together, Facebook and Google draw more than 60 percent of global online advertising revenue. Traditional media companies suffer in a particular way under this regime, as they are dependent on digital platforms in two fundamental ways: not only do the giants consume a large piece of the advertising cake, they also act as gatekeepers, given that a majority of online media users reach their desired services via search engines and social media networks.

In addition, social networks and chat services have almost inevitably become monopolies. The winner-takes-all dynamic of the market, combined with the risk involved with switching to an underdog when everyone else is already using WhatsApp, for example, explains this tendency.

The fact that policymakers and public authorities have come to the point where they no longer want to stand by and watch this development play out has much to do with the growing number of scandals associated with these otherwise invincible giants. In the past year alone, it was Facebook above all others that was forced to admit to massive security gaps, data leaks and targeted disinformation campaigns in a rapid succession of what felt like monthly incidents.

Last March’s Cambridge Analytica scandal, which revealed that the company had, over several years, illegally extracted the profile data of almost 90 million Facebook users and used it for targeted election campaign advertising – including the US presidential election in November 2016 and the Brexit referendum in June of that same year – marked a watershed moment.

These revelations shocked institutions and the public into action. European governments and the European Commission are now acting in a twofold manner to counter the misuse of data – first, by introducing stricter data protection measures, and second, by enforcing stricter monitoring and regulation of hate speech and fake news in social media.

In this regard, the adoption of the General Data Protection Regulation (GDPR) marked a milestone. The GDPR, which has been in force throughout Europe since May 2018, harmonizes the rules governing the processing of personal data by private companies and public authorities. It is ultimately designed to give consumers more control over the use of their personal information.

In response to the GDPR, Facebook, Google and comparable companies grudgingly accepted the stricter regulations, while nevertheless doing their best to circumvent them. For example, Facebook formulated the adjusted user settings for its network in a deliberately misleading manner. Now, when its users seek to protect their private sphere, a warning pops up telling them that this will limit considerably their use of the network.

It is clear that these digital platforms need to realize that they cannot get away with such methods. In early January, France’s data protection authority – making use of the GDPR for the first time – slapped Google with a record fine of €50 million. The data watchdog called Google out for not sufficiently informing its users of how Google uses their data internally. It also charged Google with failing to provide users the effective means to consent to their data being used for advertising purposes

Google’s parent company, Alphabet, which generated a turnover of roughly €120 billion in 2017, will pay the fine from its stash of petty cash. Still, the resolute action undertaken by the French data protection authority shows that the days of “anything goes” are finally over.

This new approach is proving to be important, not least in view of the coming European elections on May 26 and the overall battle against fake news. Young people, in particular, now get their news updates on social networks; but, unfortunately, not all of the reports distributed on those networks are credible. In fact, according to a recent poll taken by the Vodafone Foundation, young people are exposed to fake news and hate speech at least once a week; with as much as one-fifth of them being exposed to these things on a daily basis.

Facebook, Twitter, Mozilla, Google and YouTube have ensured the European Commission of their willingness to take targeted action against misinformation, machine-aided propaganda campaigns and covert political advertising. In return, at least for the time being, the EU has agreed to refrain from any further legal requirements and new regulations.

And yet it remains obvious that nothing much has been achieved in the past several months. In late January, the European Commission criticized the ongoing lack of transparency with regard to the identification and labeling of political advertising. The emphatic demand coming from Brussels is that Facebook, in particular, should be obliged to do more to detect false information within its network and work together with fact checkers.

The European Commissioner for the Security Union, Sir Julian King, also announced that a public “alarm system” should be in place by March 2019 that would allow member states, companies and users to report suspected fake news items. Facebook, meanwhile, announced that – starting in late March – it would attach a disclaimer to any political advertising within its network and provide information as to who paid for each ad.

But the Commission clearly has little faith in this pledge. In the run-up to the European elections, it will be monitoring the progress made by online services every month; and then, toward the end of the year, a comprehensive report will be issued on the state of affairs. If the results are not satisfactory, the European Commission might finally take its gloves off and launch a number of legislative initiatives.

However, even though more decisive action on the part of political bodies is long overdue and would be most welcome, both Berlin and Brussels would do well to think beyond a policy of mere restrictions. In the longstanding debate over these digital giants, activists for data protection and civil rights have repeatedly raised the demand for a European alternative – in particular to Facebook and Google. One potential model might be the public service broadcasters that exist in most European states. In a manner similar to these, it would be possible to finance an alternative social network by means of fees or taxes, while also equipping it with a democratic administration. Such a body would not have to be profit-oriented, which, in turn, would render ads – and thus also commercial espionage targeting users – superfluous. Instead, a service such as this could score major points with regard to data protection, transparency and user sovereignty.

Incidentally, the startup financing for such an endeavor could even be provided by Facebook and Google themselves. They would merely have to fulfill their social responsibility in Europe and finally be obliged to pay an appropriate level of taxes, instead of moving most of their profits into tax havens. However, for that to happen, these digital giants will most likely have to hear many more loud and crashing warning shots. 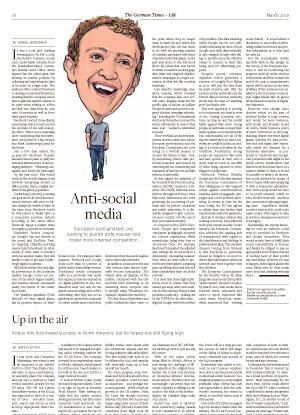