Berlin, Prenzlauer Allee, just behind the Ringbahn subway line. A drunk and staggering, somewhat shabby looking older woman with a sec­ond-hand cigarette butt in the corner of her mouth stretches her left fist into the air and shouts out to the folks waiting for the walk signal to flash green: “Enough of this nonsense! You all have enough blankies!”

I love these kinds of exclamations in public places. You surely hear them in most big cities, but in Berlin, where the locals – especially in the east and around the edges of the city – still foster a strong dialect, they are the most direct, at times mean and quite often comical.

The woman stands on the bridge over the Ringbahn, which demarcates the inner city from the outskirts of Berlin. Especially in the east and northeast of the city, the train line has become somewhat of a social barrier over the last ten years. Behind the Ringbahn bridge, SUVs turn into compact cars. As soon as pedestrians heading away from the inner city step off the bridge and onto solid ground, baby strollers suddenly become cheap or second-hand; coffee comes out of a big thermos and is actually called coffee – or Plörre, German slang for dishwater; an ice cream cone costs 40 cents less; and you can try your luck at the slots in any number of one-room casinos well into the wee hours of the night. There are old people who spend all day perched on a pillow in their window sill gazing down at the street, lighting one cigarette after the other. But there’s also the well-dressed woman who, on early Sunday mornings, moves from one trash bin to the next in search of returnable bottles.

This year will make 35 I’ve spent in Berlin – just about the whole time in Prenzlauer Berg. In this hot summer of 2018, as I was walking across Schönhauser Allee, I felt a few drops of rain turn to steam on the crosswalk baking in the sun, and for a brief moment I was able to recall the expectations of that young woman who had just fled the countryside. The hopes I had back then were inseparably linked to the big city’s olfactory reservoir at that time: the scent of lime blossoms and water sprayed on dry streets, mixed with the crueler smells of season-old potatoes, pissoirs and dead mice, sooty chimneys and lentil soup with bacon, that is, if you happened to venture through a building’s gate to its back courtyard.

The dilapidation of the city dovetailed with my vanquished illusions of childhood, which begged for something new to take their place. The city’s unrenovated spaces and cemeteries ensured that past generations were never far from our thoughts. Another constant presence in our lives was the insuperable concrete wall, which I never imagined I would see disappear. Its virtually over-night disappearance six years later marked the advent of a truly exhilarating time.

The first few years after the Wall fell are rhapsodized, often by people who weren’t there, as a time when property, houses and apartments – especially in the east – seemed to belong to no one. Money was not an issue. A new culture was emerging from the rubble, like the vinegar trees that come to life in autumn, in colors so vivacious, a box of watercolors could never echo them. But the two halves of the city, in their own right and in competition with one another, had lived beyond their means, a gargantuan self-service shop of corruption and subsidy. Thus, at the start of the new millennium, the deeply indebted state of Berlin was forced to hawk its silverware, which included the sale of up to 60,000 apartments from non-profit housing associations at a give-away price to return-oriented, market-listed housing associations. There are barely any vinegar trees remaining today in the inner city; every once-vacant lot is developed, only rarely with social housing; open spaces for artists are shrinking; studios and rehearsal spaces have been repurposed or have simply become unaffordable.

Ten years after the start of the financial crisis, it is clear who got the short end of the stick in Berlin – the renters, i.e. the overwhelming majority of Berliners. Low interest rates have made real estate investment a high-yield endeavor, the result of which has been a continual rental-price explosion with particularly grim results for Berlin; for, in contrast to other European capitals, 86 percent of the city’s 1.6 million apartments are rental flats, 72 percent of which are owned by private lessors. The rest are divided between housing cooperatives and municipal housing associations. The fragmentation of entire rental houses into individually purchasable condominiums, expensive and often pointless façade insulation and a modernization allocation of 11 percent still make for an unfettered business model and a license to print money – a situation that is quickly becoming an irrevocable reality.

“Berlin, where have you gone?” asked Fabian Hinrichs in his 2013 performance “Die Zeit schlägt dich tot” (Time beats you to death). In his book of the same name, actor and essayist Hans Zischler argues that “Berlin is too big for Berlin.” It’s one of the most truthful sentences I’ve ever read about Berlin. There are so many different ways one could interpret those words. One is that the idea of Berlin was always larger than the lived reality, and this contradiction produced decisions in Berlin that were disadvantageous to the rest of the world. Another is that Berlin transcends far beyond the conception any individual has of Berlin. The totality of opinions possessed by all 3.5 million Berliners on their city results in anything but a closed narrative.

Every Berliner who walks through the city sees something different. This fascinates me. A person who lives affluently in Zehlendorf moves through the city with a different orientation and knows a Berlin that is entirely different than that known to the young Turkish woman who grew up in Neukölln. The old women I spoke to for years about Berlin, and who are now almost all dead, were tough and unsentimental, sometimes mean and scared of nothing.

Those coming to the city to find success never let their image of Berlin crumble, and when it does, they just rebuild it. One of the old women had a saying back then: “Everyone gets their slice of Berlin.” This is no less true today, only the slices have become more unfairly divided than they were 30 years ago.

Thus far, anyone who has come here with great plans and an arrogance stemming from prejudice has failed in Berlin. Even the worst blowhards who have been in town for just a day and start holding forth on the habits and customs of the city are swallowed up in a flash. One could say that Berlin has always drawn in people who would arrogate to clean up the city, and then rubbed their faces into the Brandenburg dust. The price has often been high, and sometimes required the help of others, as with the liberation of Berlin in 1945.

Unfortunately, there is at present a tendency to segregate, as it is commonplace in the big cities of the world. But Berlin has no such tradition, as one sees from the few villa districts in the southwest of the city. Living in close proximity to people with vastly different origins, income levels and education – a fin-de-siècle apartment block is a popular and revelatory example – was a wonderful peculiarity of Berlin. But now every pre-war apartment building is in great jeopardy. The “locals” – long-established tenants are now commonly referred to by this English or “new German” term – are seen as inherited liabilities among stacks of gold bricks. They are increasingly being forced out of their familiar neighborhoods in the inner city and deposited in the outskirts of town. Berlin, now as before, is a conglomerate of 3 cities, 59 villages and 12 former estates. Those who have lived in Prenzlauer Berg for decades feel displaced in places like Reinickendorf or Hohenschönhausen, especially when they haven’t moved there voluntarily.

For decades, the poor in Berlin had always had a roof over their heads and a lock on their door. They have now become much more visible. Many people with precarious employment – and there are many in Berlin – who rely on the dole or are raising children alone are afraid of losing their homes and having to live on the street. I will never forget the moment when my almost 90-year-old neighbor came down the stairs crying, a note in her hand informing her that her lease was being terminated because her landlord wanted to move into the apartment himself. But where to go if Berlin is the only place that gives you life, where no one gives a hoot if your hat’s on crooked, your belly is big and round or your skin is dark? To live in abandoned shacks, allotment gardens or tents?

The number of born-Berliners who still live there is dwindling. At present the figure is 47 percent, while in Berlin Mitte, the city’s most central and most gentrified district, it’s only 34 percent.

As has always been the case, young people without a penny to their name are moving to Berlin to try their luck. They come from Brandenburg, Hamburg, from Dresden and from the Ruhr Valley, and despite the cliché, not so much from Swabia. In terms of non-Germans, most newcomers are from Poland, followed by Turkey, Russia, Syria and Bulgaria. In the past five years, Berlin has become a Noah’s Ark, not only for refugees from Syria and Afghanistan, but for artists and intellectuals from Hungary, Poland, Turkey, Croatia and even Great Britain, who cannot tolerate the rise of new nationalism in their countries or have lost their work prospects for political reasons. They are all forming communities that are more or less mixed, but often exist in parallel as well.

Most of the older generation of born Berliners is relatively composed in facing these changes. Their city has always reinvented itself anew, even during the time of the Wall, when it served as center stage for the Cold War.

Imagine, if you will, that all those who moved to the city over the past 30 years disappeared for just 10 minutes, and with them their habits and customs, the tables lining the sidewalks in front of cafés, the late-night convenience stores, the fruits, spices and meals, and the ways of walking, dressing, dancing, working and raising families. Even the most parochial born- Berliners wouldn’t wait a minute before screaming: “Enough of this nonsense!” 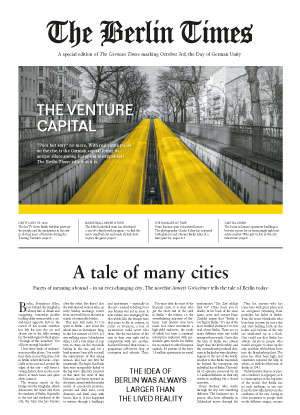