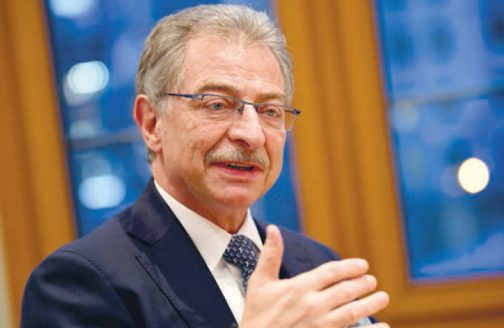 A conversation with Dieter Kempf, President of the Federation of German Industries (BDI), on tariffs, trade balances, the image of German companies in the US and German industry’s contribution to the US economy.

The Federation of German Industries (BDI) is sup­porting Deutschlandjahr USA 2018/2019. What expectations do you have of the campaign?

Dieter Kempf: The goal of Deutschlandjahr is to render Germany and German industry more prominent in the US by means of political events, science conferences and cultural experiences that will take place both locally and on tour, especially in heartland states. These efforts have become even more important in the past two years, given that the trans-Atlantic partnership has found itself in increasingly troubled waters. Our “Wunderbar together” initiative seeks to give new impetus to the trans-Atlantic friendship and to make it possible to comprehend the enormous mutual importance of trans-Atlantic economic rela­tions. This is particularly vital to us at the BDI.

From the perspective of the BDI and German indus­try, which Deutschlandjahr projects promise to have the greatest impact?

The campaign involves an abundance of concerts, readings, exhibitions, sporting events and culinary treats designed to make it possible for people to experience modern Germany first-hand. Exchange programs will also serve to strengthen trans-Atlantic dialogue. The participation of German industry in Deutschlandjahr USA is a key requirement for the success of the initiative.

Deutschlandjahr offers a unique opportunity to showcase the extent to which German industry is a strong partner for research, investment and jobs in the US. German companies will participate by means of exciting exhibitions and projects. Using interactive, surprising and instructive elements, these companies will be able to convey their innovative strength. Some of the most important elements will be education, advanced training and the future of labor. The focus will also be on themes such as digitization, mobility and energy efficiency. Throughout the campaign, we will be constantly underlining those components that involve a productive partnership with the US.

The campaign comprises more than 300 projects, but do you honestly believe it will change Donald Trump’s view of Germany’s allegedly unfair trade practices?

President Donald Trump is outright obsessed with bilateral trade balances as an indicator of fairness. And while it’s true that Germany has a large trade surplus, we shouldn’t forget that trade balances are not indicators of fairness. Indeed, several factors influence how much a country exports and imports. For example, the US has a huge domestic market with a very enthusiastic consumer base, whereas Germans spend less and save much more than Americans. A purely national approach is also flawed due to the fact that the economies of EU member states are closely intertwined with one another. Overall, the current EU-US trade balance – which includes not only trade in goods but also services and primary income – is almost equally balanced.

More importantly, however, the focus on trade alone is misleading. When we look at capital flows, we see the huge contribution German industry makes to the US. For example, the stock of German investments in the US at the end of 2016 amounted to $373 billion. This puts Germany in fourth place among the most important foreign investors in the US. Also, German companies employ roughly 674,000 workers in the US. This is exactly how Deutschlandjahr can highlight the importance of German companies and make their contribution to American society even more visible.

Might Deutschlandjahr also contribute to rebuilding the image of German carmakers, for example? And if so, how?

The image of German industry in the US remains exceptional. In fact, people still see German products as bearing a seal of quality. However, I am convinced that German companies participating in the Deutschlandjahr campaign will be able to effectively show the US government that they are an even stronger partner to US industry and American citizens than currently perceived. For decades, German companies have contributed significantly to US economic growth and exports, while simultaneously acting as engines for job growth and as sites of professional training. We can’t stress this enough, and we’re going to continue to emphasize it. Many senators and governors are well aware of the posi­tive contributions made by German companies to the US economy.

In keeping with the trend, Deutschlandjahr USA is a bilateral event. But aren’t bilateral talks the wrong way to approach trade agreements?

Only the EU can conclude trade agreements, not Germany alone. And this is exactly the way it should be. It’s only possible for us to be truly strong if we work in conjunction with our European partners. The EU is much more than just the sum of its member states. However, the focus of President Trump’s criticism is chiefly on Germany. And indeed, the German and American economies are closely intertwined with one another. For example, US tariffs on automobiles would hit us harder than many other EU members. For that reason, we have a special responsibility to invest in trans-Atlantic relations. But we must always coordinate closely with our partners, for example in BusinessEurope, our European umbrella organization.

Might the failed TTIP Agreement receive a renewed boost in the context of the Deutschlandjahr events?

Either way, a relaunch of free trade talks would be a win for both sides. I would recommend that Europe and the US start at a point where they can quickly agree, for example by completely eliminating industrial tariffs on both sides. In the end, it’s crucial that all sides find themselves reflected in an agreement.

In addition to tariffs, talks would also have to focus on other trade barriers as well. In that case, everything will depend on what kind of offers the US makes to the EU, one of the strongest and most confident economic blocs in the world. It is also important that all trade partners work on a constructive agenda to reform the World Trade Organization (WTO). There is one definite advantage, namely that neither side has to start the discussion from scratch.

Dieter Kempf
is President of the Federation of German Industries (BDI). 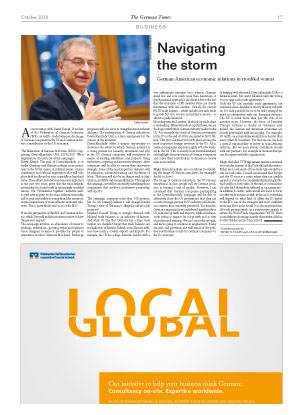