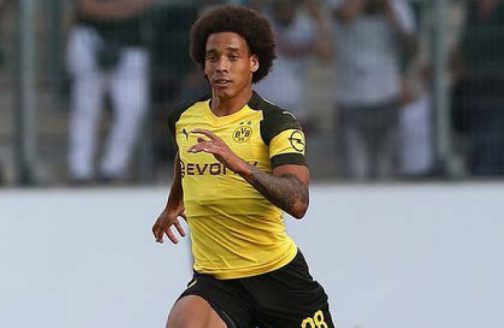 It is, generally speaking, very hard not to notice Cristiano Ronaldo. In the case at hand, the former Real Madrid star was singing along to the official Champions League anthem just prior to the start of the second-leg quarter-final against his team’s cross-town rival Atlético: “Die Meister – Die Besten – Les Grandes Équipes – The champions!” Back then, in April 2015, the egocentric Portuguese player was ridiculed for mouthing the words to the song. And yet, it’s undeniable that this over-the-top anthem is designed to have a shot-in-the-arm effect on professional soccer players: it’s monumental, opulent and makes the air crackle with tension and excitement, which is exactly what this competition is about. This is soccer with thunderous timpani, rich trumpets, a huge string section and a magnificent choir – in other words, the type of Baroque showiness we expect from a sacred oratorio.

In the world of club soccer, the Champions League has been the measure of all things since the 1992–93 season. Today, however, erstwhile enthusiastic German fans are becoming weighed down by some tough questions: Are Bundesliga teams going to be able to keep up in the Champions League? Or at least in its smaller and often unfairly chastised brother, the Europa League? Or is it really true that money can score goals?

If true, then we already know who the undisputed conqueror of European soccer would be: Juventus Turin. Club boss Andrea Agnelli (42), the last male heir in that famous Italian industrial dynasty, made it clear from the very beginning: “Juventus has to win the Champions League this year.” And this is exactly why the “Bulls” from Piedmont put €117 million on the table to sign Cristiano Ronaldo. Of all people, it is now up to Ronaldo to break the winning streak of Real Madrid’s star-studded team (four Champions League titles in the past five years!) and raise the cup on June 1st, 2019, in the Estadio Wanda Metropolitano, the home stadium of Atlético Madrid. For their part, the “Colchoneros” – even after their success in three recent Europa League championships (2010, 2012 and 2018) – the dream is to make it to the final and get their hands on that elusive higher-ranking title, this time in their own back yard, so to speak.

Also among the favorites this year, which include FC Liver­pool, FC Barcelona, Manchester City and Paris Saint-Germain, is Germany’s own behemoth, FC Bayern München. In 2001, Bayern won the Champions League after a penalty shootout against Valencia in Milan, and in 2013, they won 2:1 against Borus­sia Dortmund in London. After that German-on-German final at Wembley Stadium, English soccer fans lauded and applauded the virtues of German soccer on the streets and in the pubs of the British capital. In fact, they virtually bowed down in front of what they saw as the highly refreshing style of play practiced by FCB and BVB, also register­ing that the youth and support system operated by the German Soccer Federation (DFB) and the Bundesliga was a prolific, fruit-bearing machine. One year later, the German national team would go on to win the World Cup in Rio de Janeiro under the tutelage of soccer aesthete Joachim Löw.

That was less than five years ago. In 2018, after the shock of their first-round elimination in Russia, the situation is sobering. “Die Mannschaft” is still trying to find its inner balance, and the German clubs recently took a very humble approach – at least in comparison to English, Spanish, Italian and French teams – with regard to new signings.

Germany’s first division teams invested €460 million in new players. The Premier League spent €1.39 billion for stars both big and small. Italy’s Serie A spent €1.072 billion, Spain’s Primera Divisíon spent €890 million and France’s Ligue 1 spent €634 million (including the €180 million transfer of mega talent Kylian Mbappé from AS Monaco to Paris Saint-Germain, which was already in the bag in 2017).

Oliver Kahn (49), one of the chief critics of Germany’s devel­opment process, recently came forward to make a good point: “It’s going to be difficult in the future for Bundesliga clubs to get absolute top players,” said the businessman and three-time world number-one goalkeeper. “German clubs are still entirely dependent on success stories from their first-class youth programs. But that can’t be the only strategy they pursue over the long term.” Kahn put his finger even further into the wound after Bayern president Uli Hoeneß announced that his club had expressed no interest whatsoever in acquiring CR7, aka Cristiano Ronaldo. “A player of that magnitude could have helped showcase the attractiveness of the league,” said Kahn. “Ronaldo would have been a milestone for the Bundesliga.”

In the meantime, the bosses at Bayern set out on a completely different path. In spite of the impending career exits of Arjen Robben and Franck Ribéry – two beloved Bayern stalwarts – the club was noticeably restrained on this year’s transfer market. The only new signing that will cost anything is Alphonso Davies, an extremely talented Canadian national team player born in a refugee camp in Ghana to Liberian parents who also happens to be 17 years old. Bayern is covering the €10-million transfer fee for the winger as well as the almost equally high bonus payments. Davies is certainly no bargain, but he (hopefully) represents a promise for the future. Either way, Uli “Mister Bayern” Hoeneß has made it known that he intends to launch an attack in summer 2019 with an “aggressive transfer policy.” According to Bayern CEO Karl-Heinz Rummenigge, however, this doesn’t change any of the team’s sporting ambitions with regard to 2018–19: “We want to relive what we experienced in London in 2013 very soon,” said Rummenigge unequivocally.

Bayern is and will continue to be the Bundesliga’s trump card, at least for the time being. But what about the other three German Champions League starters, Schalke 04, TSG 1899 Hoffenheim and Borussia Dortmund? For these clubs, the sole purpose is to reach the knockout phase, there doesn’t seem to be more in it than that. The “Royal Blues” from Gelsenkirchen-based Schalke and the “Black and Yellows” from Dortmund have invested the most in the league this year. Dortmund spent roughly €75 million on new recruits Abdou Diallo, Axel Witsel and Thomas Delaney, among others. Schalke invested €54.2 million, upgraded their squad with the help of Sebastian Rudy and simultaneously made an outstanding deal with the sale of youngster Thilo Kehrer for €37 million to the Qataris at Paris Saint-Germain.

In last year’s qualifiers, newcomers Hoffenheim were unable to get past FC Liverpool – a team that would go on to play in the Champions League final – but are now eager to see how far they can make it in 2018–19 thanks to six promising recruits (Leonardo Bittencourt, Vincenzo Grifo, Ishak Belfodil, Joshua Brenet, Kasim Adams Nuhu and Arsenal loan Reiss Nelson cost €30 million). Their goal is to deliver “festive matches” against Shakhtar Donetsk, Olympique Lyon and Manchester City at their debut at the highest international level.

Hoffenheim is a town of 3,000 inhabitants and thus the smallest site of soccer nobility in Europe. These days, it continues to profit from the efforts of its generous majority shareholder, co-founder of software giant SAP Dietmar Hopp (78), who has pumped roughly €350 million into his pet project since joining the club in 1989. Silent contributions to gaming operations, money for overall infrastructure as well as a comprehensive young talent program – these are the key points in the financial approach of the former TSG striker and passion­ate golfer. In fact, TSG 1899 Hoffenheim is just as ambitious as the company with headquarters in nearby Walldorf. Plus, since February 2016, they’ve had at their helm Julian Nagelsmann (31), a highly confident young coach who counts among the most talented in Germany, perhaps even on the entire old continent.

Nagelsmann actually received – and declined – an offer from Real Madrid. “I’m going to postpone that career peak a bit,” he noted, and then, in a surprising move, decided to take over at RB Leipzig starting in 2019.

“We want to achieve something big,” says Nagelsmann in his usual aggressive tone, when asked about Hoffenheim’s goals. TSG manager Alexander Rosen, the congenial partner to that “little rascal” from southwest Bavaria, sees the Champions League as a huge incentive for the small-town club: “We’re not in it just to sing the anthem and travel to three very nice stadiums. We want to leave our mark in Europe.”

Roughly €1.72 billion in prize money was up for grabs in the Champions League last season; in the Europa League, that number was around €400 million. This year, clubs in the English Premier League will take in the equivalent of €2.3 billion in national TV revenues, followed by the Bundesliga (€1.16 billion), Ligue 1 (€1.153 billion), Primera Divisíon (€1.1 billion) and Serie A (€1.05 billion).

In spite of the obvious dominance of FC Bayern, the resultant monotony in Germany’s first division and the envious side glances at the English Premier League – which is miles ahead in terms of TV revenues – it is important that the Bundesliga not fall into a state of doom and gloom. In fact, in the areas of sponsoring, transfer revenues, match-day income, hospitality and merchandising, the German clubs are doing solid, meticulous, customer-oriented, exemplary work. Germany’s elite class of clubs continues to act as magnets for audiences; with an average of 41,000 visitors per game (in contrast to 36,000 in the Premier League), the Bundesliga is the best crowd-pulling league in the world.

It is also encouraging that various national and international regulations (the binding 50+1 rule, UEFA’s Financial Fairplay) are not being watered down by the German Soccer League (DFL) but actually followed. Indeed, despite the free market attitude, professional soccer still needs safeguards and boundaries. The most recent “DFL Report 2018” points, for the first time, to a total turnover of €4.01 billion for the 36 clubs of the first- and second-division Bundesliga. This marks a 4.2 percent increase in value over the 2016–17 season and the previous year. That’s a record.

Thanks to their balanced sources of income, Bundesliga teams are experiencing ongoing growth, financial health and high levels of popularity among sports fans, all of which allow them to continue to be able to compete at an international level. Still, most of the children starting elementary school in Germany in 2018 have no idea that it’s possible for any other team than FC Bayern to be national champions. In other words, it’s high time the Bundesliga reinvent itself – this time as a premium product. As we all know, lofty coronation hymns, goose-bump moments and the crowning moment of glory – “The chaaaampiooons!” – don’t come free.

Joachim Klaehn
is the sports editor at Rhein-Neckar-Zeitung, a daily paper based in Heidelberg. He has been reporting on TSG 1899 Hoffenheim and the German national soccer team since 2008. 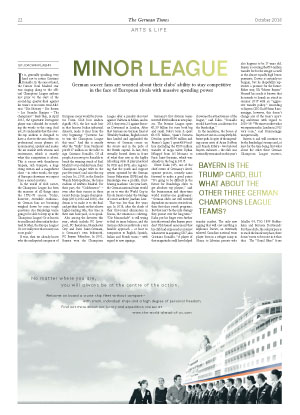