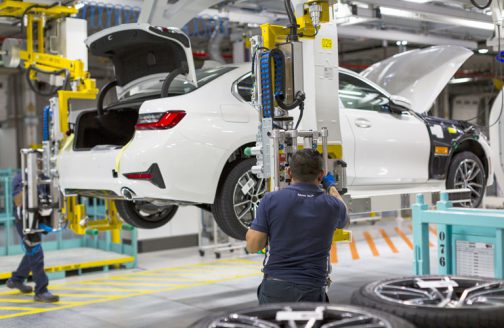 Economically, at least, things are just fine between the United States and Germany. Bilateral trade is flourishing. America is the biggest consumer of German goods worldwide, ahead of France and China. Exports across the Atlantic rose last year by 1.5 percent to €113.5 billion. In 2018, imports from the US into Germany grew even more rapidly, rising by 4 percent to €64.6 billion. The bilateral trade surplus with the US is still the largest of all of Germany’s trading partners but at least it has declined, which, with a little good will, could be construed as a step towards more normalized relations.

German companies that invest in the US are reporting excellent financial results, thanks, among other factors, to Donald Trump’s tax reforms. Last year, Washington reduced the tax rate on corporate profit from 35 to 21 percent, which has resulted in something of an economic upturn. “

The order books are full and some of our members are reporting record results,” says Dietmar Rieg, President and CEO of the German-American Chamber of Commerce in New York. Yet, like most people dealing with international trade issues these days, he adds a big “but.” “But there’s a great uncertainty looming over everything.” This is a consequence of Trump’s unorthodox trade policy in Washington.

Entrepreneurs, traders and investors don’t know what’s still to come from Trump: tariffs? Or maybe even an open trade war with China? Their worst fears were confirmed in May, when the US president threatened to impose punitive tariffs on Mexico if the Mexican government failed to stop the flow of immigrants and refugees from Guatemala to the southern border of the US. And this is happening in a dispute with a country with which the US has just concluded a renewed free trade agreement called UMCA to replace the expiring NAFTA agreement.

The American Chamber of Commerce in Germany (AmCham Germany) is also reporting good business outcomes, but great uncertainty about the future. The Transatlantic Business Barometer, which the Chamber of Commerce published in April together with the Roland Berger management consultancy, makes this abundantly clear. It notes that the lack of reliability in US politics is weakening overall business outcomes. Just 8 percent of German companies in the US rate Trump’s policies as positive, while 37 percent expect business conditions in the US to deteriorate over the next three to four years.

Conversely, the great majority of American investors regard business conditions in Germany as good or very good, although a quarter of those surveyed also expected more challenging times ahead, due to higher energy and labor costs and deficits in digital infrastructure, among other factors.

Decisions at the national level will not be enough to maintain the attractiveness of Germany and the US as countries to do business in, says Frank Sportolari, president of AmCham Germany. “Instead, we will have to rely on dialog and trans-Atlantic cooperation to counteract protectionist measures.”

In terms of atmosphere, the deterioration in US-German economic relations is already making itself felt for many people working in government administration. Cooperation is still working well at the operational level, according to German government circles. Many experienced officials are still at their desks in Washington. “But as soon as it’s about anything out of the ordinary, a tricky visa issue for example, things get very tough.”

One particular problem seems to be the highly controversial US ambassador in Berlin, Richard A. Grenell, who was appointed by Trump in May last year. Contrary to usual diplomatic practice, Grenell has repeatedly, publicly and sharply criticized the German government for adhering to the nuclear deal with Iran and spending too little on defense, for example. “The man is a disaster, he is actively damaging German-American relations,” says a Berlin insider. Grenell is not helping to solve conflicts; he is exacerbating them.

The German automobile industry is especially affected by this altered political climate. The Trump administration has postponed its threatened punitive tariffs on European car manufacturers until November, so BMW, Daimler and Volkswagen now simply have to wait and see what will happen.

If 25-percent import tariffs really are imposed in the fall, the consequences are predictable. Car prices will rise, supply chains will be disrupted and manufacturing capacity will fall idle.

The example of BMW highlights the absurdity of the US trade policy. For the Munich carmaker, the United States is a far more important market than Germany, so it stands to suffer greatly from the tariffs. BMW has also just opened a new factory in San Luis Potosí in Mexico, which would be impacted if the US were to carry out Trump’s threat to impose sanctions on its neighbors to the south. BMW’s biggest factory is in Spartanburg, South Carolina. SUVs made in the southern US mean thousands of jobs there, but most of those vehicles are shipped to China, so BMW would be a major casualty in any unlimited US-Chinese trade war.

However, the dispute about tariffs and cars is not the only thing straining economic relations between the US and its European allies in general and Germany in particular. This crisis is far more general and it’s affecting the basic trust between the partners.

There have been frequent trade disputes in the past, including the legendary 1960s “Chicken War,” when Europeans and Americans fought over high protective tariffs on poultry. Its power has enabled the US government to forcibly assert its national interests again and again. Yet the fundamental trust among its allies remained, as it was based on the assurance that foreign firms in the US would be treated fairly.

This trust is about to be lost. You can expect almost anything from a government that seriously believes foreigners (the Chinese, the Germans) are to blame for the deficit in the US balance of trade and must be punished for it.

There was a time, according to an editorial in The Economist, when the US directed its power towards achieving certain clearly defined goals, such as opening up Japanese markets to US exports. Trade policy is being used to deal with issues that have nothing at all to do with trade. Tariffs are constantly being used to create a “climate of instability” among US trade partners. This will erode trust. At some point the US will pay a high price for this loss of trust, for the country’s global power is based not just on successful companies and aircraft carriers, but, perhaps most importantly, on trust.

Even issues on which the US has fundamentally valid arguments are affected by this loss of trust. There is much to be said for exercising extreme caution when involving Chinese companies in your country’s digital infrastructure. The Beijing government’s claims to power are already ominous. But when the US government threatens to end intelligence cooperation with the German government if it permits Huawei to contribute technology to its 5G mobile phone network, as The Wall Street Journal reported, the conflict takes on a whole new dimension. A problem that the West should be able to solve together risks becoming a USGerman dispute in which Germany will have to defend its own national interests.

These are not good prospects for the future. 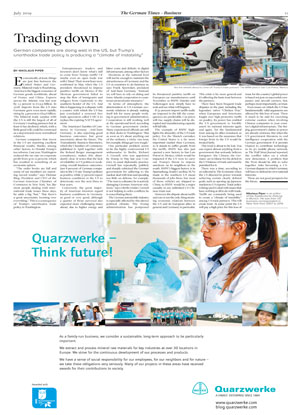