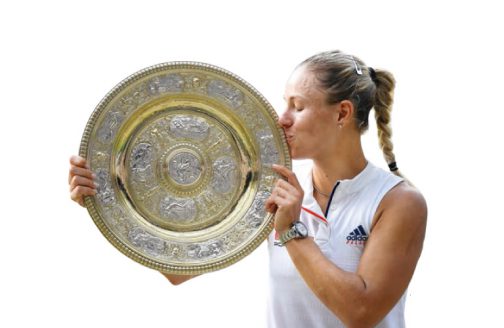 On Sept. 5, 2015, Angelique Kerber began composing a text message on her cell phone. She was sitting in the locker room of the Arthur Ashe Stadium in New York after her match against Victória Azárenka. It was an exciting, gripping, first-class match, perhaps the best of the entire tournament, but Kerber had lost. She was now in a state of desperation, struggling with herself and her defeat. The message she was about to send is one that athletes usually write at the end their careers. The recipient was Barbara Rittner, head coach of the German national team, and the message read: “It just isn’t going to work for me, is it?”

One year later, on Sept. 8, 2016, Kerber once again found herself in the catacombs of the world’s largest tennis arena. She was about to play Caroline Wozniacki in the US Open semifinal, but that wasn’t what had the tennis world buzzing. The big news was that Serena Williams had just lost, which meant that after the tournament, Kerber was going to rise to the world number-one spot, something no German player had achieved since Steffi Graf. Her reaction? “I was in the fitness studio with my coach and my physiotherapist. We just went silent for a couple of sec­onds.” Kerber would go on to win the tournament. It would be her second Grand Slam title after the Australian Open she won only a few months prior. In other words, contrary to the sentiment of her message to Rittner, it was going to work for her.

Two years later, on Sept. 1, 2018, Kerber was back at Arthur Ashe Stadium, where she lost 6:3, 3:6, 3:6 to Dominika Cibulková. Kerber didn’t play very well, and she also didn’t fight as boldly against this defeat as she’d done so many times before in her career. And yet, she by no means gave the impression that she felt like a failed person, a reviled person, a desperate person. This time, she wasn’t going to write a distressed text message to Rittner. If she had wanted to write something, it would probably have been similar to what she told reporters that day: “I won Wimbledon this year. No one can take that away from me.”

It is important to keep these three moments in mind when talk­ing about Angelique Kerber. They say so much about her, as well as about Germany’s interest in tennis. Kerber won three Grand Slam tournaments since her US Open loss in 2015, plus the Silver Medal at the Olympic Games in Rio. She also earned tens of millions in prize money and was ranked #1 in the world for a total of 34 weeks. And yet, nobody has given her a nickname other than “Angie,” an abbreviation of her first name, and anyone who says “Angelique” also has to say “Kerber” afterwards. This was not the case for “Steffi” or “Boris” in the 1980s.

Steffi Graf won everything. That’s why she continues to be the benchmark for all young women playing tennis today. People now like to argue that millions of Germans discovered their love of tennis in the 1980s. But that’s only half true. What actually happened is that millions of Germans became interested in Steffi Graf and Boris Becker, and only after that did they come to know the difference between topspin and slice. A similar thing happened shortly thereafter with boxer Henry Maske, when everyone suddenly became familiar with the concept of “double cover.” Also, thanks to Michael Schumacher, Germans came to know that on the Formula One track in Montréal, the best strategy was to take three pit stops. In other words, back in the 1980s, Germany didn’t experience a tennis boom; it was a Steffi-and-Boris boom. This accounts for a lot of the things now happening to Kerber.

After writing that sad text message to Rittner back in 2015, Kerber did not seek guidance from Boris Becker, although he was there, only a few meters away, as she typed. He was working as a coach at the time and was prepping his protégé Novak Djokovic for his next match. No, Kerber did not turn to Boris, she turned to Steffi, who invited her to a joint training in Las Vegas and also exchanged some text messages with her. The two women did not become friends; Graf knew that Kerber didn’t need a friend. Instead, the tennis legend gave Kerber some very simple advice: “You have to go your own way.” It was exactly what she needed to hear.

Kerber is not blessed with an exceptional touch, a thrilling serve or a soulful slice. She had to work extremely hard for everything she’s now capable of doing on court. She’s one of the fittest players on the women’s circuit. Her training included honing her understanding of on-court situations and her ability to focus entirely on the next rally, especially in tricky situations. It might sound easy, but anyone who’s played tennis knows how incredibly difficult it is not to think about the score or the preceding rallies.

Until 2015, however, Kerber had a problem. She was one of the best players in the world, but when it came to all important tournaments, she just couldn’t win.

“Anyone who makes the same mistake over and over again has to learn from it at some point,” she says about her own transformation. She struggled time and again with draws and drills, with wind and weather, with overcrowded training courts and negative reporting, i.e. with things she has no influence over. Of course, for a while you can use these factors to explain away bitter defeats, but at some point athletes have to ask themselves if maybe they aren’t quite as good as they always thought. On that point, Kerber says: “I decided then and there that I would never again let the pressure get to me.”

And Kerber did just that. She no longer stressed about things; plus, she stopped looking for excuses. This approach led her to win both the Australian Open and US Open in 2016. Anyone who’s ever been present at the usual celebrations that take place after key sporting events would have been astonished after Kerber’s triumph at the US Open. She didn’t want to drink any alcohol; she didn’t want to celebrate in a nightclub. What she really wanted was the ham sandwich and sour peach rings her mother Beata had smuggled into the complex.

Still, after Kerber started winning Grand Slam tournaments, there was no second tennis boom in Germany, even if a couple of people tried adamantly to start one. Kerber has had to participate in appearances with sponsors, reporters, tournament officials, etc., but anyone who watches her during these events can see that what she really wants is to be left alone. No athlete likes to lose, but maybe Kerber saw her numerous early defeats (at the US Open in the first round) as a way to be left alone again.

She won Wimbledon this year, which is the pinnacle for a tennis career. And she has learned from her successes and all the hype they brought with them. After her victory in London, she refrained from taking on too many appointments. She traveled home to the Polish town of Puszczykowo and took a vacation, which for her means lying around, chilling out, taking herself out of the picture. “I knew what I wanted to do and what I didn’t want to do. And I said so, too. After Wimbledon, I wanted to do nothing for a few weeks.”

One might say that Kerber threw away an opportunity to win another Grand Slam title. A number of other favorites got knocked out early at this year’s US Open; there could have been a repeat of her Wimbledon final against Serena Williams. And it’s true, Cibulkova hadn’t won the match; Angelique Kerber had lost it. Unnecessarily. But anyone who pooh-poohs Kerber at this point has not understood what her life is about and even why she’s so successful.

The mantra of many professional athletes is keep going, never stop. Once you get over the first hurdle, you have to immediately think of the next one. And if you win one tournament, you need to win the next as well. It brings up a serious question: Why should any athlete even want to win titles if they’re not allowed to enjoy their success afterwards? This approach – the one that says you always have to win, this greed for success, this permanent dissatisfaction – can make a person terribly unhappy.

Kerber is not one of those never stop athletes. She’s not someone who climbs to the peak just to look for the next mountaintop. She’s also not an athlete who celebrates her successes in a way that would make her come tumbling down the mountainside. She is the way she is. And here’s an idea: Is it possible that Steffi Graf is sitting in her home in Las Vegas right now thinking that this Angelique Kerber has really hit the mark in life? Is it possible she’s noticed how Kerber wins major tournaments and Olympic medals and achieves the top spot in the world rankings and still – in spite of all of this – doesn’t participate in the whole circus Germans inevitably put on when one of their athletes is successful, that is, beatifying the protagonists into angels and later sending them packing off to hell?

Is it possible that Graf has noticed that Kerber – most of the time – is simply left alone? That she was given the time and the space to go her own way?

Kerber is sitting once again in the catacombs of Arthur Ashe Stadium, this time after her defeat at the 2018 US Open. She is disappointed, of course. Still, her Grand Slam record this year is semifinals, quarterfinals, victory – and now the third round. Not only is this an orderly number, it’s also quite a good track record. Kerber knows that she didn’t play well and that she’s going to have to train hard again. After this defeat, she has her eye on the next challenge. And this time, she has a special goal in mind: to achieve a “Career Slam,” that is, win all four Grand Slam tournaments, but not necessarily in the same year. Only ten women have done it in the history of tennis. Kerber only has the French Open left to win. Keep going, never stop. Sure, but at your own pace and by your own rules. This is some­thing Angelique Kerber earned. It worked out for her.

Jürgen Schmieder
is a US-based sports reporter for the Süddeutsche Zeitung. 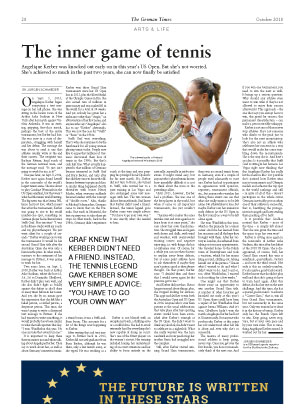