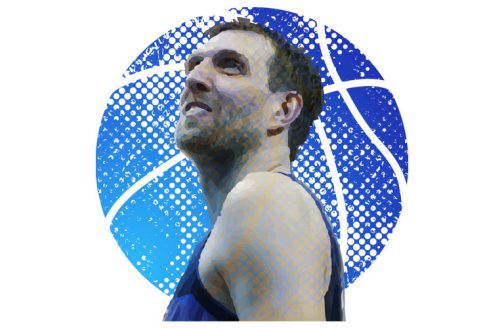 A typical German residential neighborhood at night, cars neatly parked in driveways, all the lights are out, everyone’s asleep, yet in front of one of the houses is a hoop attached to the garage. A very tall and lanky man with a ball in his hands is standing 23 feet-nine inches away. He calmly launches one three-point shot after the next, and all you can hear is the soothing sound of the ball falling through the net: swish, swish, swish.

Eventually he misses one and the ball clanks off the rim, making a slight rattling noise. Lights everywhere immediately switch on; dogs start to bark. The young man lifts his arms, sheepishly apologizing – “Tschuldigung” – before continuing his shooting exercise, draining three after three in the wee hours of the night.

The young man in the Footlocker commercial from the early 2000s is Dirk Nowitzki, a 21-year veteran of the NBA’s Dallas Mavericks, sixth highest scorer in NBA history, league MVP in 2007, NBA World Champion in 2011, 14-time All-Star, a living legend – and simply the greatest German basketball player who ever lived.

Although this list of accolades is very impressive, it is probably less effective at encapsulating what makes Nowitzki so special – as a man and as a player – than the unassuming ad.

Although he’s already 40 years old, Nowitzki only recently announced his intention to retire after he finishes the current season with the Mavericks. At his last regular-season home game in Dallas on April 9th, there were very few dry eyes in the house as fans and fellow players paid tribute to the career of their beloved “Dirk Diggler.”

And what a career it’s been.

In early April, ESPN ran a long oral history of Nowitzki making a splash at the Nike Hoops Summit in San Antonio, a showcase game pitting US high school players against a team of youngsters from around the world. The unknown skinny German kid who had been playing for the subdivision team in his hometown of Wuerzburg delivered a stand-out performance with 33 points and 14 rebounds, prompting Larry Bird to say that after having only seen a tape of that game, “you’d think he’s the greatest player of all time.”

Nowitzki was selected ninth by the Milwaukee
Bucks in the NBA draft only two months later and traded to the Mavs on the same day. He went through the typical growing pains of an NBA rookie. Not having played in college, he was used to lacing it up in front of maybe 500 people in small gyms with old linoleum floors. Now he was playing in front of 20,000 people, at the Great Western Forum in Los Angeles or Madison Square Garden in New York.

Nowitzki struggled on the court at first, but – cue back to the commercial – continued to work diligently on his unique brand of basketball that would go on to change the way the game is played. Nowitzki is not alone in the nighttime ad; an older man is standing under the basket, passing the ball back to Dirk. He is unrecognizable in the ad, but it can be no other than Holger Geschwindner, who met Nowitzki when the kid was 16 years old and became his personal coach. Geschwindner, himself a former basketball great who played for the German national team at the 1972 Olympics, insisted the 7-foot Nowitzki not be deployed in the post and not play as a regular center, but instead should develop a picture-perfect jump shot with no wasted motion and an unusually high arc.

Tall men regularly shooting from the outside was still uncommon in the NBA back then, yet when they can, their shots are extremely difficult to defend. Geschwindner – a bit of a mad scientist – had programmed a computer model to calculate the perfect angle for Nowitzki’s jumper. Over the years, mentor and mentee went on to develop a whole array of variations, including the most famous one: the flamingo, a one-legged fade-away that is near impossible to guard.

Nowitzki played his first All Star Game in 2002. In 2005, he led the German national team on a wholly unexpected, spectacular run to the finals of the European championships, defeating both Russia and Spain with game-winning buzzer beaters. Germany lost in the finals to Greece, but Nowitzki was voted the tournament’s most valuable player, reminiscent of Lakers legend Jerry West, who was voted NBA Finals MVP in 1969 despite his team losing to the Boston Celtics.

In 2006, Nowitzki’s Mavericks, which had been a cellar dweller when he got there, made it to the NBA finals, only to lose in dramatic fashion to a Miami Heat team featuring Shaquille O’Neal and Dwayne Wade. Nowitzki had played well overall, but uncharacteristically missed several crucial free throws in the decisive game 7. After losing in the first round of the playoffs in 2007 to the then-mediocre Golden State Warriors – that season, they had won a league-leading 67 games and Nowitzki had been crowned regular season MVP – it looked as if the story of his career had been written: Good but not great player, weak leader, unable to get his team over the hump.

That summer, Geschwindner took his protege on a camping trip through Australia, no basketball, no phone, just books and poetry for protection. In 2008, Nowitzki led the German national team to the Olympics in Beijing and was chosen to bear the German flag during the opening ceremony, the first time a German team-sport athlete had been given that honor. “He is a superstar and yet still remained humble,” said Michael Vesper, then general director of the German Olympic Sports Confederation, echoing what has become the dominant image of Nowitzki off the court: a stand-up guy who does not put on airs.

Over the years, Nowitzki would be awarded the Silver Laurel Leaf, the highest sports award in Germany; the Naismith Legacy Award for his contribution to the global game of basketball – the first non-American to ever receive the honor; the Transatlantic Partnership Award by the American Chamber of Commerce in Germany for the work of his foundation and his civil engagement; and the Lucius D. Clay Medal by the Federation of German-American Clubs for his contribution to German-American understanding.

But before he would amass this pile of lifetime achievement awards, there was some unfinished business to tend to on the court. In 2011, Nowitzki led his team back to the NBA Finals, and again faced Miami. However, after having traded Shaq, the heavily favorite Heat featured one of the most highly touted Big Three ever to take the court: Wade, Chris Bosh and LeBron James.

The Mavs won 4:2. Nowitzki played an outstanding series and was voted Finals MVP, but a particular moment stood out, one that is emblematic of his personality. When the final buzzer sounded, Nowitzki fought his way to the locker room. In the moment of his greatest basketball triumph, he sought out a moment of quiet away from the noise and the limelight.

The Dallas Mavericks did not contend for the NBA trophy again, having in short order sold off every major contributor from the championship team – except Nowitzki, who remained with the Mavs and did not, as has become fashionable for big stars, demand a trade to a better team. His 21-year tenure with Dallas is an all-time league record for a player staying with the same team.

Soccer is and will always be the numberone sport in Germany. The popularity of Germany’s professional basketball league could be compared to Major League Soccer (MLS) in the US: decent games, some dedicated fans, but not part of the national sports conversation. Nowitzki, however, has transcended mere basketball stardom – he has become a German cultural icon, known and beloved by people who otherwise aren’t familiar with the game. The German sociologist Wolf Lepenies elevated Nowitzki to the highest order of role models; he is “bigger than the game,” on par with the boxer Max Schmeling and Fritz Walter, captain of Germany’s 1954 Soccer World Cup champions.

Nowitzki has taken all the praise in stride, just as he graciously took in every tribute and every standing ovation he received this season from fans across the NBA. But it’s just as easy to imagine him back in his driveway, shooting threes through the night. 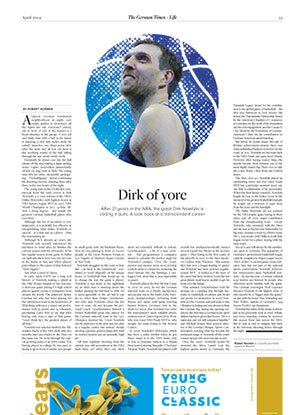