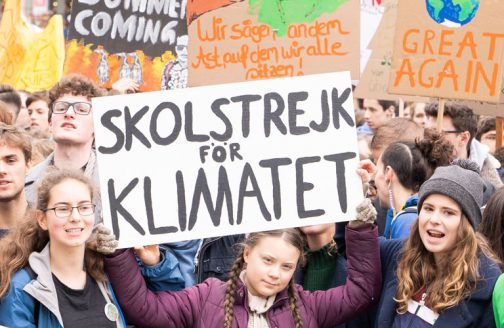 For many Germans, the demonstrations held on Fridays by schoolchildren calling for climate protection have exposed a family scandal of sorts. While everyone knows and quietly accepts that the entire family has long been dumping its waste behind the house, the sudden demands made by their youngest to bring an end to the ignorance and denial seem as cheeky as they are inspiring.

While it’s true that there’s been a public discussion surrounding the fact that greenhouse gas emissions in Germany have not been decreasing but rather remaining constant for about 10 years now – with some sectors even registering an increase in emissions thanks to the economic boom – the vehemence of this new generation of students now calling for serious climate policy goals has nevertheless taken journalists, political parties, politicians, parents and the business lobby completely by surprise.

The German public’s bewilderment regarding the protests was expressed initially with sheer speechlessness. Instead of taking the tangible climate concerns of their own offspring into consideration, the generations of parents and grandparents focused entirely on whether it was even permitted to cut class to protest in favor of climate protection. In the German tabloid Bild, Hans-Peter Meidinger, head of the German Teachers Association, complained that the state was making a fool of itself by not enforcing the children’s legal obligation to attend school. Meidinger argued that the demonstrations were far from “education-related” events. Christian Lindner, chairman of the liberal FDP party, took to Twitter to old-man-splain to the young students that climate protection was something they “should leave to the professionals.”

Other politicians proved to be more open-minded: Chancellor Angela Merkel (CDU) and Environment Minister Svenja Schulze (SPD), for example, expressed their support and praised the political commitment of the young generation, while in no way responding to their substantive demands. The students did, however, receive momentum from 23,000 scientists worldwide who signed the Scientists for Future petition in favor of their climate concerns.

The young men and women involved in the Fridays for Future movement in Germany are now organized into roughly 310 local groups. And, like their peers in more than 100 countries, they are calling on politicians to commit to responsible climate policies. In Germany, this includes the following: a faster withdrawal from coal energy – by 2030 at the latest, rather the German government’s current target of 2035 – and the fulfillment of the Paris climate goal of a maximum of 1.5 degrees of global warming. In individual cases, the students are also calling for taxes on meat and measures relating to carbon-dioxide reduction, both designed to ensure more sustainability.

In Germany, as elsewhere, 16-year-old Swedish student Greta Thunberg is the face of the protests and a role model for the young protestors. Now nominated for the Nobel Peace Prize, she became known worldwide after a short speech she gave at the World Economic Forum in Davos in 2018 went viral. Still, it would be wise not to overestimate her influence. As Dieter Rucht, a sociologist at the WZB Berlin Social Science Center, determined at one of the largest demonstrations in Berlin on March 15, although Thunberg is at the heart of a growing interest in climate issues among large numbers of German youth and has even prompted many to join in demonstrating, roughly one-third of the demonstrators insisted the Swede had little to no influence on their decision to participate. Instead, they offered concepts like “future,” “climate change” and “climate protection” as the reasons for their participation.

According to Rucht, the Fridays for Future demonstrators differ from previous protest movements in one characteristic above all, namely that roughly 57 percent of participants are female. And a majority of these young women self-define as belonging to the upper middle class, with many of their parents being academics themselves. On the political map, they appear to be located mainly in the left-liberal milieu and among the Greens.

No matter what their gender, these young students are protesting at a time when the issue of climate protection has gained new political relevance. Germany’s grand coalition has stated its intent to pass climate protection legislation before the summer holidays. However, the draft presented by Environment Minister Schulze caused outrage among her cabinet colleagues for a number of reasons. For one, the ministers for transport, agriculture and building would be obliged to provide a detailed portrayal of the measures they intend to take in order to save the required amounts of greenhouse gases. In addition, each ministry would also be expected to pay any potential penalties to the European Union out of its own budget.

The EU already requires Germany to emit 38 percent less greenhouse gas by 2030. If Germany doesn’t achieve this goal, it will have to pay penalties. The transport sector – a genuine problem child in Germany’s overall climate and environmental policy – could be hit first. Plus, there’s the threat of high fines from Brussels. Accordingly, in its draft budget for the coming years, the German federal government has already planned an annual sum of €100 million for the years 2020 to 2022.

While the coalition remains bogged down by day-to-day political minutia, the demonstrating youngsters are undeterred in proving the seriousness of their cause. These angry offspring are not letting up in their demand for change. According to a survey by the WZB’s Rucht, the students see their protest as a form of “political self-empowerment.” And roughly 60 percent of them are convinced that climate change can be managed by means of tangible and prescient policymaking. One of the organizers, Julia Neubauer, even announced her intention to make the European Parliament elections in May into a “climate election.” For a Europe otherwise preoccupied with the rise of right-wing populists, this is hopeful and welcome news. 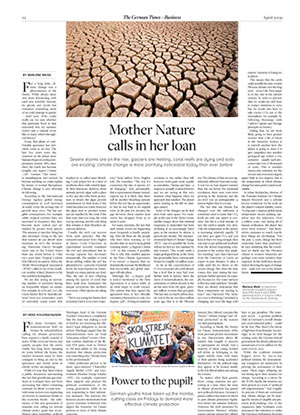