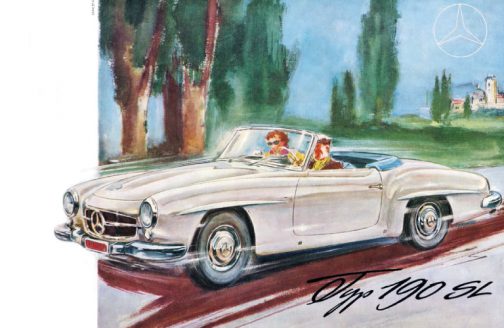 At first glance, it would appear that the German automotive industry has little reason to complain. Records are being broken left and right. In early July, the Stuttgart-based Daimler group announced it had sold more than 1.18 million Mercedes vehicles in the first six months of the year, breaking their half-year record.

Their competitors in Munich are also having a great run; between January and June 2018, BMW delivered more than 1.24 million vehicles – its BMW, Mini and Rolls Royce brands combined – while celebrating its highest six-month revenues of all time.

Even the Volkswagen Group is on top. Despite the emissions scandal that started in September 2015 and marked the most serious crisis in the company’s history, VW’s core brands sold roughly 3.12 million vehicles in the first half of 2018, also a record. It would appear that the scandal has not prevented customers from buying Volkswa­gens.

In other words, things are going very well, at least in terms of sales. Still, the harbingers of a potential downturn have increased in recent years.

For example, in the course of this year, Daimler scaled back its earnings forecasts, mostly because the principles of free international trade seem to be attracting fewer adherents. In fact, BMW is similarly affected. As the largest auto exporter from the States – ahead of Ford and General Motors – Daimler exports vehicles to China from its plants in the US. The company is hit by the tariff raises on cars it produces in Spartanburg, South Carolina being shipped to China. Daimler has been forced to raise its prices in the People’s Republic. This could have a negative impact on sales figures in what is currently the largest car market in the world.

Automakers also have to deal with the new emissions measurement system being enforced in the European Union since September. The procedure, which bears the rather bulky name “Worldwide Harmonized Light Vehicles Test Procedure,” has led to additional costs as many older models must be recertified. Volkswagen suffered most at the Group level due to the fact that many of its corporate brands – such as Porsche and Audi – took longer to pass certification tests. One reason for this was that engineers were still busy dealing with the diesel scandal, meaning that VW had to slow down its manufacturing.

But current developments aside, the German automotive industry has taken a step back to reflect on its own future. For example, Volkswagen CEO Herbert Diess recently estimated that German carmakers have but a 50:50 chance of pioneering the mobility of the future. The reason, he told the German business newspaper Handelsblatt in late August was that the industry is currently facing an immense structural change. Diess argued that his pointing out this uncomfortable fact was based on realism, not pessimism – and he is not alone in this assessment of the situation in the home of the Autobahn.

If German auto manufacturers and suppliers lose importance in the future, it could have a deep impact on the German economy. The auto industry is a key economic factor; some would even say the most important one. Taken as a whole, auto manufacturers and suppliers in Germany, as of recently, employ more than 820,000 people, not to mention the thousands of jobs that are directly dependent on cars, such as auto-repair shops, car dealerships and the roughly 15,000 gas stations across Germany.

At the beginning of last year, the research service of the German Bundestag calculated a total of 2.15 million “car-dependent” jobs in Germany. That accounts for roughly 5 percent of all individuals employed in the country. According to Germany’s Federal Office of Statistics, cars and trucks are also the country’s most important export, ahead of engine building and chemical products. The auto industry’s share of total gross value added in Germany is 4.5 percent. In other words, there’s a lot to lose.

All this piles on in a moment of automotive history: the German industry is only one of many facing deep, fundamental changes. A number of auto executives are reiterating the formula predicting that the change in the industry over the next five to ten years will be more drastic than in the last 50. This is due, in large part, to three parallel developments putting automakers and suppliers, in particular, in a vice grip.

On the one hand, there is the transformative shift towards electromobility, which is spurred on by challengers like the US-based electric carmaker Tesla, but also by increasingly rigid European regulations on carbon dioxide emissions. German car manufacturers are feverishly working on new electric models. Indeed, it’s no coincidence that Mercedes, BMW and Audi presented new electric automobiles – or at least “future studies” – one after the other; these products are set to appear on the market gradually, starting next year. Volkswagen has designated the start of the coming decade as the beginning of its electric offensive. Today, German carmakers offer 30 different electric models; in 2021, the plan is to raise that number to more than 100.

The second set of challenges involves the increased networking of vehicles via the internet as well as autonomous driving, where the car itself takes the wheel. Another goal is to build cars that will be able to find open spots in parking lots, even park themselves and take over tasks like driving on the Autobahn, so drivers can concentrate on other things.

The third major challenge is found in the changing needs of consumers. At least in industrialized countries, there are more people interested in driving cars than people interested in actually owning one. Today, none of the leading manufacturers operates without the keywords “car sharing” and “mobility services,” which can be accredited to the success of companies such as the American ridesharing service Uber.

The foreseeable magnitude of the impact of these changes was confirmed by a recent study conducted by the strategy consulting firm Oliver Wyman on behalf of the German Association of the Automotive Industry (VDA), an interest group representing German manufacturers and roughly 600 parts suppliers. The study’s strategic advisors had both good and disturbing news for the automotive industry. On the positive side, growing demand is estimated to prompt a 30 percent rise in global car production, to around 123 million vehicles by 2030. Value creation is set to grow at a slower pace, by roughly 27 percent to reach €1.31 billion in the same time frame. There is no doubt that there will be opportunities for growth.

Here’s an eye opener: by the end of the coming decade, 25 percent of cars sold will have an electric engine; today, depending on the country, that share is between zero and a maximum of two percent. In addition, value creation will shift further towards Asia, because markets there are not as saturated and customer demand is still high.

“The transformation underway in the automotive industry is more drastic than ever before, and it is taking place on all three levels – among customers, in the production process and in the products themselves, all at the same time,” notes Jörn Buss, a partner at Oliver Wyman. “The automotive industry is facing some stormy weather.” And yet, Buss also states that German manufacturers and suppliers are well-prepared for the challenges ahead and that they are working intently on innovations.

And it’s true, a lot of money is flowing into the automotive industry of the future at this very moment. According to figures provided by the VDA, manufacturers and suppliers are going to invest €40 billion in alternative drives, in particular in electric motors over the next three years. Another €18 billion will be spent on net­work expansion and digitization. According to Stefan Bratzel, pro­fessor at the Center of Automotive Management in Bergisch Gladbach, this is an absolute necessity. Bratzel points out that generating new functions, services and products is more important than ever for a manufacturer’s reputation: “Innovation is now a matter of survival,” notes the automobile expert.

Bratzel also recently calculated just how innovative the different auto manufacturers around the world actually are. The bench­mark for Bratzel’s ranking is an index that involves giving product developments different weightings depending on how new and innovative the invention actually is. Among the manufacturers of premium cars, BMW, Mercedes and Audi come in at the top three spots in the ranking. Volkswagen leads the pack among mass car producers, ahead of its Japanese competitor Honda and Ford in the US.

And yet, this leading role comes with a deep obligation to not let up. As we all know, the competition is always ready to take over in a heartbeat. The biggest innovator on the index is Tesla, followed by the Chinese electric car brand Nio. This is remarkable, seeing as Nio is only four years old. In other words, when it comes to capacity for innovation, a little guppy is already hot on the heels of the industry’s biggest fish.

Whether the subject is trade policy, electromobility, autonomous driving or mobility services, the German automotive industry is keenly aware of the challenges it is facing, says Peter Fuss, partner at the consulting firm EY, which has been studying the subject for decades. “I don’t know of any company pursuing a head-in-the-sand policy,” says Fuss. And the auto industry is resilient: “It has taken a number of blows over the years and has always had to fight,” he notes.

Just as in the past, the challenge today’s automobile manufacturers face is to optimize the quality of their products while simultaneously reducing costs. This is, as Fuss points out, their daily task: “Precisely for this reason, the industry is well-prepared to cope with changing conditions.” And, ultimately, there is one key point we shouldn’t forget: “People need cars because cars enable them to be individually mobile. And, at the moment, there’s nothing better than a car for getting around independently.” 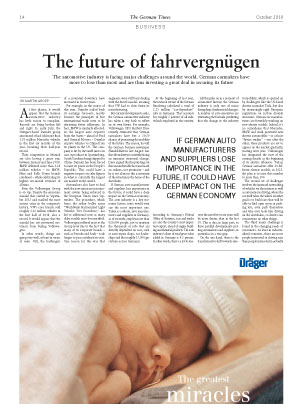