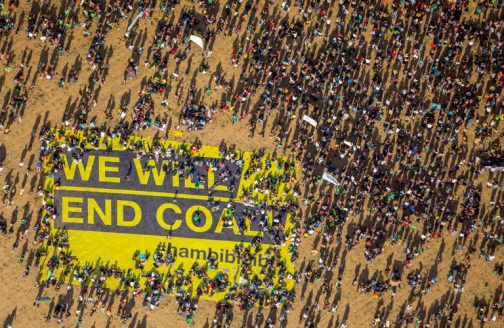 It’s an ambitious goal: By 2022, Germany will close its last nuclear power plant and, only 16 years later, stop burning coal altogether. Too slow or too ambitious? It’s a hot debate in Germany, at the moment. Nevertheless, the federal government plans to follow the recommendations of the so-called Coal Commission, and to codify it in law by May. It will also stipulate which regions and companies directly affected by the fossil-fuel phase-out will receive government aid – and how much. There’s a lot of money at stake here.

The Coal Commission comprises politicians, company representatives, advocates for environmental organizations and scientists. After months of consultations and one final overnight negotiation marathon at the end of January, a compromise was reached: By 2030, the output for power plants burning lignite and bituminous coal will be reduced to 17 gigawatts – less than half of today’s installed capacity. And Germany will quit coal altogether by 2038; in 2032 it will be determined whether it’s possible to shift coal’s termination year forward to 2035.

The environmental organizations issued a dissenting opinion in which they stated that, in terms of climate policy, Germany must quit coal by 2030. Commission member Karsten Smid, an energy expert at Greenpeace Deutschland, claims that “from a technical standpoint, it’s easily achievable.”

Representatives of the pro-business wing of the Christian Democratic Union (CDU) voiced their skepticism about 2038 as the target year for quitting coal. While Ralph Brinkhaus, the CDU caucus leader, conceded to the Welt am Sonntag that “there’s wide societal consensus that something must be done to address the climate,” he claims that whatever action is taken must also guarantee the security of Germany’s energy supply. And furthermore, consumers and businesses should not be unduly burdened by the government’s fossil-fuel phase-out.

The minister-presidents of Germany’s federal states that would be particularly affected by quitting coal are demanding a certain measure of planning security. In other words, the recommendations of the commission must be implemented and the €40 billion promised by the federal government must be written into law. This admittedly hefty figure should cushion – both socially and economically – the transition to a power supply based on renewable energy sources. North Rhine-Westphalia, Brandenburg, Saxony and Saxony-Anhalt, the federal states that are home to lignite mines, are expecting aid, as are energy-intensive industries such as aluminum smelters and the fossil-fuel energy sector.

In its recommendations, the commission envisages within four years’ time the removal from the grid of facilities with a capacity totaling 12 gigawatts, three gigawatts of which derive from burning lignite. The power stations slated for closure lie chiefly in the west of Germany, i.e. in North Rhine-Westphalia. The Rhineland’s lignite region and its vast mines would be affected first, with the upside that the vigorously contested Hambach Forest could be preserved. This swath of land between Cologne and Aachen, with an area of no more than 500 hectares, is all that’s left of a once expansive forest of beech trees; and it is scheduled to be cleared to make room for a strip mine in development by the Essen energy firm, RWE.

In autumn 2018, the Hambach Forest became a symbol leveraged by Germany’s ecological movement for greater climate protection. Activists erected tree houses and occupied the forest; environmental organizations obtained court injunctions against the authorized clearings; thousands of citizens responded to appeals to take “forest walks” to save the Hambach. And on the other side of the coin, RWE employees demonstrated to keep their jobs. The police ultimately cleared the protesters from the forest, during which a young journalist fell to his death from a rope bridge.

To date, no concrete action has been taken for the coal regions in eastern Germany. It is clear, however, that quitting coal necessitates the forced expansion of renewable energy sources, which was the sticking point for finding a solution in eastern Germany. But then the German wind energy industry was hit with some bad news. According to a report issued in January by the German Wind Energy Association (BWE), in 2018 only 743 wind turbines were erected with a capacity of 2,402 megawatts – a 55-percent drop from the previous year.

Germany oversees a total installed capacity of 52,931 megawatts produced by onshore wind facilities. By midyear 2018, the BWE was still expecting an increased installed capacity of 3,300 megawatts. According to BWE President Hermann Albers, it is thus “even more important to pin down the 2030 goal as it applies to the expansion of renewable energy sources and then to adjust the prescribed paths.” He goes on to portend that the 2018 slump “jeopardizes the leading position enjoyed by the German wind industry among international competition.”

The German government’s Climate Action Plan 2050 had laid out certain benchmarks for emissions reductions. The goal for 2030 is a 55-percent reduction in greenhouse gases compared to 1990 CO2-output levels, as well as an even loftier aim of 62 percent in the energy sector.

Reaching this goal requires technology-specific expansion pathways as well as the dismantling of certain regulatory hurdles. Technologies like Power2X – i.e. the conversion of electricity into a gaseous or liquid form along with industrial-scale energy storage devices – must be promoted and implemented.

Last year’s low growth figures appear to be lingering. In 2019, the BWE expects only a modest increase of 2,000 megawatts for onshore wind power. However, things look a bit rosier for the offshore industry. According to the consultancy firm Windguard, 2018 saw Germany’s 1,305 offshore facilities generate wind energy with a total installed capacity of 6,382 megawatts. This figure met the level of expansion predicted by industry associations, and at the beginning of the year, the Trade Association Power Systems (VDMA) announced that the legally prescribed expansion limit of 7.7 gigawatts can be reached by 2020.

Moreover, the expansion goal of 1.9 gigawatts for photovoltaic facilities appears to be too modest. The Fraunhofer Institute for Solar Energy Systems (Fraunhofer ISE) considers it necessary to produce five to seven additional gigawatts of installed capacity from photovoltaic facilities if Germany is to meet its goal of full reliance on renewable energy sources by 2050.

Another element that is lacking is an efficient network through which wind energy from northern German and solar energy from southern Germany can be distributed. The four operators of Germany’s high-voltage electric grid estimate the cost for expanding the network at €52 billion. Integrating the offshore wind farms in the North Sea and Baltic Sea into the electricity grid would require an additional €24 billion. For solar and wind energy to expand at a faster rate than predicted, two additional north-south routes would be needed. The three largescale north-south links that are currently in planning are scheduled to be completed by 2025.

Experts have long bemoaned Germany’s delays in expanding its grid. One reason is the country’s tedious planning procedures, as property owners refuse to yield their land for power lines and local citizens’ initiatives protest against the electric-cable super highways laying claim to the countryside.

The Grid Expansion Acceleration Act, spearheaded by Federal Minister for Economic Affairs and Energy Peter Altmaier (CDU) and enacted in December 2018, provides for faster planning processes and higher compensation for property owners, who are often farmers and lumbermen. “The Coal Commission’s recommendations have succeeded in initiating the withdrawal from fossil fuels,” says Greenpeace representative Karsten Smid. “And we’re well prepared for the disputes that are sure to follow.” 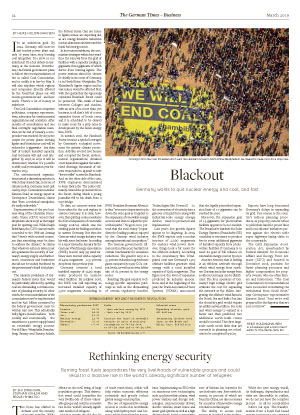