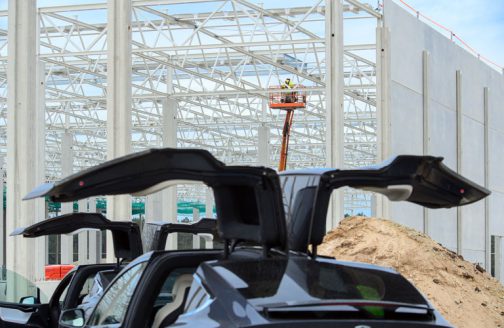 Elon Musk is standing on the construction site of his European Gigafactory. Behind him in the distance, a dense arrangement of concrete pillars rises up from the ground. A traditional German “topping-out” garland swings in the wind as it hangs from a building crane. “Deutschland rocks!” exclaims Musk.

This is the first time the Tesla boss has visited his forthcoming Gigafactory in Grünheide, located just across the city limits of Berlin in the state of Brandenburg, near the Polish border. A group of journalists and fans have been waiting for him for hours, and now he’s finally there. He’s wearing a big smile along with a dark suit and a white shirt. You might even say Musk looks approachable. “Grünheide is great,” he says.

To be completely truthful, the South-African-Canadian-American entrepreneur has most likely been to Grünheide at least once before. Rumor has it that he’d already surveyed the area but had done so incognito. And then, finally, at a gala in the German capital in November 2019, he announced his intention to build the first Europe-based Gigafactory “near Berlin.”

There was nothing to see back then except a dense pine forest. The chosen land is a wooded area between the Berlin Autobahn “ring” and a stretch of a regional railway line. In 2001, BMW had shown interest in building a factory there, but the Bavarians ended up choosing big-city Leipzig over this small town in Brandenburg, which is surrounded by forests and home to roughly 8,500 inhabitants.

What might have seemed like a setback for the community and the whole region at the time, has turned out to be a stroke of luck. When the billionaire Musk came calling, Brandenburg was able to pull 300 hectares of well-situated land out of its hat. Brandenburg’s Governor Dietmar Woidke (SPD) has called the project “the largest industrial investment in eastern Germany since 1990.”

It’s not surprising that many Brandenburgers expect the US automaker to generate well-paying industrial jobs. While the logistics sector in the greater Berlin area is definitely booming, those jobs are considered only moderately well-paid. Plus, there’s the fact that many well-compensated jobs in the mining sector in southern Brandenburg are set to disappear along with Germany’s exit from brown coal. Starting in July 2021, it is expected that 12,000 people will eventually work at the Tesla factory manufacturing 500,000 Model Ys each year.

The Gigafactory construction site is not only the biggest in Brandenburg, it is also being built at a speed that outpaces all others. Musk announced his investment in November 2019. In January 2020, the plans were made public, and at the end of February 2020, 90 hectares of forest were cut down over the course of six days by lumberers from Germany, Finland and Ukraine. Since then, the factory has been growing rapidly thanks to the use of pre-fabricated concrete building parts. Musk’s ultimate goal is to outpace the construction of his Gigafactory in Shanghai by 11 months.

Even a year ago, very few people would have believed that German bureaucracy – notorious for its meticulousness and maddening snail’s pace – would go along with and thus facilitate such a breakneck speed. Don’t forget, Brandenburg is the federal state where the capital region’s new international airport (BER) is only now nearing completion – roughly nine years after it was supposed to open, 15 years after construction began and 29 years after planning began. (see page 20)

But Elon Musk is not only fast, he’s also a notorious risk-taker. To date, the entrepreneur still does not have a final permission slip from the state of Brandenburg. Tesla is building in a step-by-step manner with only temporary approval from the state. The final go-ahead is expected to come in the fall. If the approval goes through, it will mean the factory has the official green light for completion. But this green light also means that residents can start taking legal action against the factory.

On the other hand, if the final approval fails to come through, Tesla will have to take down everything it built to date. This is, however, a highly unlikely scenario, and many politicians continue to stress enthusiastically that they see the factory as being right on track.

Others see it differently. Roughly 400 petitions against the project have been submitted by citizens or associations to the Brandenburg State Office of the Environment. Most of them revolve around concerns regarding the environment, deforestation and the area’s water balance.

Among the opponents of the factory is a citizens’ initiative from Grünheide. In early September, when Musk was expected at the construction site, this group of locals stood at the entrance driveway holding signs that read: “Stop the careless exploitation of nature and groundwater immediately.”

Some sections of the site are indeed located in a drinking water protection zone. “It’s the wrong site for this factory,” said Steffen Schorcht, spokesman for the initiative. From the point of view of Schorcht and other critics, the needs of the factory will endanger the supply of water to the local population over the long term. According to current plans, Tesla will use about as much water as a city of 40,000 inhabitants. But planners also want the factory to be able to expand even further, thereby attracting even more companies. And then there are the problems caused by climate change, for example that groundwater reservoirs have been replenishing more slowly due to droughts in the past two years.

Still, defenders of the factory claim that Tesla moving into the neighborhood will do nothing more than exacerbate problems that have long since plagued the region. At least that’s the way Grünheide resident Martin Hildebrandt sees it. Back in January, when 200 people took to the streets for the first time to protest against the factory, he spontaneously organized an anti-demonstration. Hildebrandt said he wanted to show that the majority of Grünheide residents were not against Musk moving in.

Tesla advocates hope that money will flow into the region soon after the carmaker starts producing its vehicles. There is also a significant amount of pressure being applied to resolve urgent infrastructure problems. For example, skyrocketing rents in Berlin and low building-interest rates have been attracting capital-city residents to the outskirts for years now, and the Tesla factory is expected to draw another 10,000 people to the region. With kindergartens and schools simply nonexistent, and with infrastructure like trains and highways used to capacity, across-the-board improvements, particularly with regard to the rail network, will prove essential.

Tesla intends to transport its vehicles and other materials primarily by train. The idea is also to have employees reach the factory directly by rail. However, the expansion of the train network is proving to be a tough nut to crack, and Tesla has now shifted its position and will rely initially on trucks when production starts. Roughly 460 trucks are expected to make the trip every day.

It should come as no surprise if this approach exacerbates the existing transport problems. Municipalities and rural districts are working together with the state of Brandenburg to come up with concepts for the fast and effective development of infrastructure. Unfortunately, the pace of infrastructural expansion is lagging behind the speed at which the factory is being built. And furthermore, many problems are going to have to be solved simultaneously. Municipal politicians insist that the factory’s ultimate acceptance depends on whether it is considered to be a success by the people. What must be prevented at all costs is any deterioration in the quality of life in the region.

Tesla has announced that it wants to be involved in solving this problem and others. And, so far, the Americans have proved themselves to be capable of learning – when the protests against excessive water consumption started getting louder, Tesla cut its water use by one-third. The idea now is to recycle even more water, with the Gigafactory in Grünheide set to become “the most environmentally friendly factory in the world.” At least that’s what Musk announced during his most recent visit. But then again, he also invited everyone to the factory’s opening party – in the summer of 2021.

Ina Mathes
is a business and science editor at the Märkische Oderzeitung in Frankfurt (Oder). 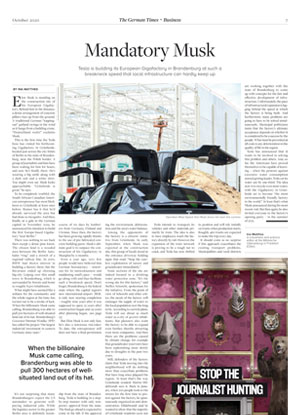