The speech given by German President Frank-Walter Steinmeier in the Bundestag on the 2020 Day of Remembrance for the Victims of National Socialism was notable for three reasons: it was moving, it represented the very best of what statesmanship can achieve and it delivered rhetoric that was entirely fitting for the occasion. Instead of limiting himself to the well-worn ritual of uttering the words “Never again!,” Steinmeier spoke of Germany’s friendship with Israel and his gratitude for the Israeli President’s presence in the Bundestag on that day.

His commemoration also included remembrance of other victims of National Socialism – groups that had either been neglected or perhaps deliberately omitted from mention in decades of commemorations in the Bundestag: homosexual victims who had waited years to be acknowledged; victims of the other Nazi genocide against the Sinti and Roma; the sick and disabled exterminated under the cynical title of “euthanasia”; and those individuals murdered for being “anti-social” or “career criminals.”

Steinmeier also issued a demand for education and the providing of information. Rather than lament the fact that the last eyewitnesses to the Holocaust will soon be gone, he called for a new form of remembrance for a younger generation. This new generation wants to know what the past has to do with their lives today, he explained, and they are right to ask the question.

It is now widely accepted that the way to reach subsequent generations is not by erecting more memorials. This fact is well-known among those who are now calling for new forms of approaching and processing history, rather than standing idly by and watching the emergence of a new nationalization of memory.

Of course, the erection of historical memorials as reminders of the past and warnings about the present remains a fully honorable act. This is especially true in Berlin, the city in which the horrors that befell the civilian population of almost all European nations in the 20th century were planned and set forth.

If such monuments are necessary for the sake of expressing emotion and responsibility, however, they must also be accompanied by a corresponding site of learning, information and a cognitive debate, where the full extent of the crimes of German occupation can be documented and experienced. There is thus far no such center of information and debate.

The most important messages contained in any speech can often be found in its subtleties and nuances. Steinmeier made it clear that the acceptance and treatment of historical guilt and responsibility among democratically minded members of the German Bundestag was beyond question. He also pointed out that there are, in fact, non-democratic forces present in Parliament today. Steinmeier noted that völkisch and nativist ways of thinking, stagnant nationalism, xenophobia and anti-Semitism are on the rise again, and that a new wave of politicians is now slogging the very phrases that led to catastrophe in the 1930s.

In the most important message of his speech, Steinmeier warned that history must not be allowed to become a weapon. This implies that we should consider it counterproductive if and when anti-Semitism is used as the ultimate reproach by one person to silence another. Indeed, the invocation of the term “anti-Semitism” has become a thought-terminating cliché in the struggle for sovereignty over the politico-cultural narrative and correct political behavior of today.

Justified criticism of the politics of Israeli governments is not anti-Semitism; it is an obligation born of friendship. This is precisely what former German President Johannes Rau once said at an international anti-Semitism conference in Berlin – to thunderous applause.

Only a few days ago, Former Israeli Ambassador to Germany Avi Primor gave voice to a current truth when he told the local Berlin-Brandenburg broadcaster rbb that today’s good German-Israeli relationship could be credited to Chancellor Angela Merkel. This was the case, he argued, even though she had deep reservations about the policies of the current Israeli government and even disliked the prime minister. Still, he noted, there could be no doubt about her pro-Israeli stance.

Of course, a former Israeli ambassador can say many things that others might no longer have the courage to utter for fear of being tagged an anti-Semite. This label has long been the ultima ratio used by excited moralists, by those individuals suffering from a justified degree of shame and guilt, by those naïve and malicious sectarians hoping for reconciliation, and by those who demand blind, unconditional allegiance to Israel. Any real friend to Israel – a country that faces threats from many sides at once – would do well to wish it supporters wiser than such zealots.

Steinmeier’s speech on the occasion of the 75th anniversary of the liberation of Auschwitz was also reassuring. He insisted that memory should not be instrumentalized, that politicians must not be allowed to decree history and that historiography must comprise freedom and open discussion between historians.

Wolfgang Benz
is a historian and former head of the Center for Research on Anti-Semitism at TU Berlin. 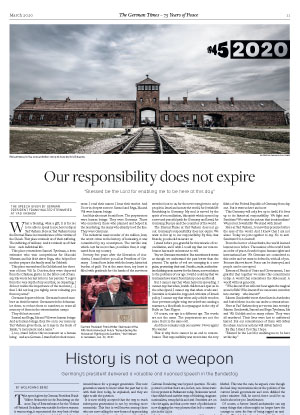