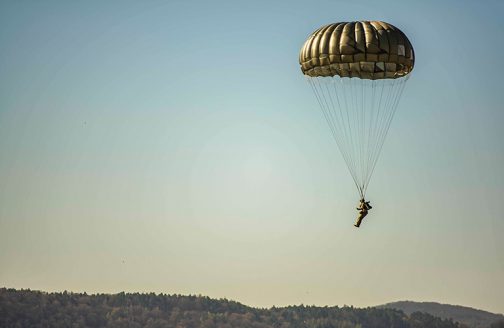 US President Donald Trump’s idea of withdrawing a significant number of US troops from Germany is neither new nor a surprise. The White House issued the same threat once before, just ahead of the NATO summit in July 2018. At the time, the reasons given for the potential transfer of US forces were Germany’s inadequate contribution to NATO’s defense capability and its intention of acquiring more natural gas from Russia via the Nord Stream 2 pipeline.

As is again the case, Poland was entertaining hopes that it would directly benefit if the US were to move troops out of Germany. For years, the national-conservative Polish government had been badgering Trump with requests that he consider stationing a complete American division (roughly 10,000 soldiers) on Polish soil. In 2019, during a visit to Washington, Polish President Andrzej Duda even suggested that the new base could bear the name “Fort Trump.” Poland also signaled its intention to contribute up to €1 billion to the cost of stationing troops in the country.

At the time, however, even this investment – which would have been sizable for Poland – sparked no enthusiasm in Washington. One year ago, Duda was forced to make do with a US promise that one-tenth of the requested troops would be sent to his country.

The circumstances that prompted Trump to issue his threat two years ago have changed little since then, except that Germany’s NATO quota has actually gone up from 1.2 percent to roughly 1.4 percent of GDP in the current year. This number might even grow to 1.6 percent in the wake of the economic slump caused by the COVID-19 crisis.

But there may be other reasons why the US president still wants to follow through on his intentions. Among these is his apparent anger at the sober indifference German Chancellor Angela Merkel has shown in greeting his political ventures (including her most recent refusal to attend an in-person G7 summit in Washington due to the pandemic). Or it might be Trump’s recollection of his election promise to “bring the boys home” from missions abroad.

It should be noted, however, that American military bases in Germany cannot be compared to field camps in other countries in which the US operates, such as Iraq or Afghanistan. US troops in Germany are stationed mostly in the southern states of Bavaria, Baden-Württemberg and Rhineland-Palatinate, and they have a long history at those sites – one that extends way back to the early days of the Cold War. US forces there have modern infrastructure at their disposal and are critical to America’s global military operations.

The US air base at Ramstein, for example, plays a pivotal role in drone missions and supply flights to destinations in the Middle East. And for years now, the US military hospital in the nearby town of Landstuhl has treated badly injured soldiers flown there directly from theaters of war in Afghanistan, Syria and Iraq.

Stuttgart is home to the headquarters of the US European Command (EUCOM) and the US Africa Command (AFRICOM). At a US base near Grafenwöhr, Bavaria, the 2nd US Cavalry Regiment has one of the most modern training areas outside of the United States. The number of combat troops as a share of the 34,500 US soldiers stationed in Germany is relatively small.

Local politicians in the structurally weak region of Upper Palatinate remain confident that their US garrisons will be unaffected by Trump’s withdrawal plans. The possible removal of troops from the region around Stuttgart would cause a bearable level of stress. In fact, residents of the affluent neighboring town of Böblingen have regularly complained about the noise caused by the Army Rangers and Navy Seals training in the area. They would no doubt be delighted if the clamor came to an end.

The political reaction in Germany to Trump’s withdrawal plans is two-fold. In its official statements, Berlin has stated that it would find the move regrettable, while also pointing out that it has yet to be informed of any precise details. However, other members of the major political parties – especially the opposition parties – are expressing very different hopes and concerns. The left-wing Die Linke has said that it supports the withdrawal, and the new SPD parliamentary leader Rolf Mützenich sees it as an opportunity to usher in “a sustainable reorientation of security policy in Europe.” Mützenich and the Greens have campaigned for years for a withdrawal of tactical US nuclear weapons from Germany.

Members of Merkel’s CDU/CSU, on the other hand, have their own concerns. Germany’s Minister of Defense, Annegret Kramp-Karrenbauer, stated publicly that a shift of large numbers of US troops to Poland would jeopardize the agreements NATO made with Moscow more than two decades ago as part of the NATO-Russia Founding Act. At that time, NATO agreed to forego a permanent stationing of “substantial” troops in those Eastern European states that had just become members of the Alliance.

Although the Founding Act did not precisely define the term “substantial,” NATO military planners nevertheless suspect that permanently stationing a military unit the size of a brigade (roughly 3,000 soldiers) would violate the spirit of the agreement. Until recently, it was clear that the Pentagon shared this opinion. Although the US – together with NATO and not least with the German Bundeswehr – has indeed strengthened its military presence in Eastern Europe over the past several years, it has thus far always rotated troops to avoid permanently stationing them there.

Policymakers in Berlin are also paying close attention to the resistance to Trump’s withdrawal plans currently emerging from Washington. On the one hand, the Pentagon seems to be making preparations to somehow substantiate the president’s blanket statement regarding a withdrawal of 9,500 soldiers. On the other hand, the voices of congressmen and senators from political camps that consider the withdrawal plan to be strategically damaging are becoming increasingly louder. Republican senators Lindsey Graham and Marco Rubio have even threatened to cut US military appropriations so that there would simply be no funds available for the troop withdrawal. 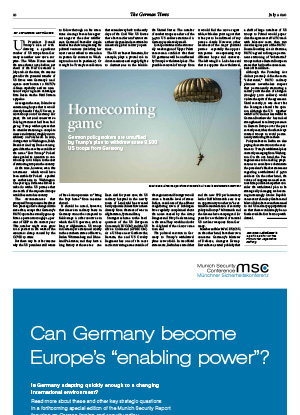