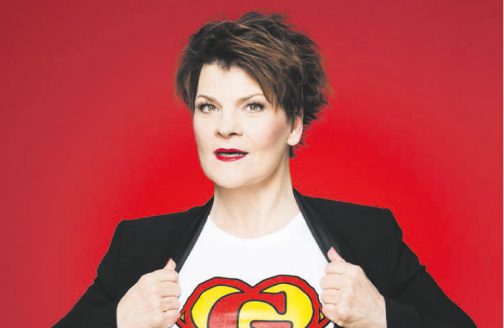 In 2017, I became a German citizen. The decision to become deutsch was not made lightly and was surprisingly emotional. The American presidential election and my personal abhorrence of Donald Trump played a major role, but my choice was actually a natural outcome of my personal reality. Both of my parents had died, there was no house in the US to keep up and no legacy to pass on, plus I have no children who will someday need to get in touch with their roots. As a freelance artist with unpaid vacation, my visits to the Homeland are infrequent and never last longer than a week or two (it’s easier to get to the beach in Greece or the Baltic).

Most importantly, after 26 years of living, working and paying taxes in Berlin, I was unable to vote in the upcoming German elections, a crucial necessity in our ever-more chaotic and turbulent democracy.

In my book American Woman: How I Lost My Heimat and Found My Zuhause (Aufbau Verlag, 2017), I describe my love for both sides of the Atlantic and the complicated, bewildering and ultimately satisfying process of becoming a German.

As soon as I got home from the airport, I was greeted with flowers, hot Frisian tea and an Elstar apple. “Stay awake!” he said. “Fight the jetlag!” And when he gave me a big hug, I thought, not for the first time: well, that’s true Bremen-style romance for you.

I had missed his sort of pragmatism and down-to-earth-ness. And by the following morning, in spite of my jetlag and somewhat foggy mental state, something else had become clearer to me than ever before. “I want to do it,” I said. – “Do was?” – “Get deutsch! I want the deutsch passport. I want to really be hier. I want to be able to vote. I want to have a say in what happens to all the Geld I pay in taxes. I want to do more than just meet all these politicians when I do TV talk shows. I want to be able to wähl them into office. I want to stop the f*** Populismus.”

I’ve been together with my man – let’s call him my “Bremen guy” – for the past 22 years, but we’re not officially married. My Bremen guy is not a big fan of weddings. He thinks the whole thing is too conservative and bourgeois. He says: “Our love doesn’t need any acknowledg­ment from the state.” “But,” I say, “think of the presents.”

Maybe one day down the road my Bremen guy and I will get married, but it won’t be because I want to get deutsch. I can take care of that myself. Besides, “shall we do it” is a bit sparse as far as marriage proposals go. So I called my tax lady and asked if she could recommend a lawyer specializing in naturalization law. She did, and I made an appointment.

We met at the Staatsangehörigkeitsbehörde Schöneberg, one of Berlin’s citizenship application processing offices. In my opinion, if you can pronounce that name clearly and without messing up, you should auto­matically get German citizenship. I was a bit nervous. Rathaus Schöneberg is quite an imposing and important building. It’s not actually a house full of rats, as the name would suggest, but a local city hall brimming with German-American history. From my balcony at home, I can see the Berlin coat of arms on the flag of the bell tower – the Berlin bear blowing in the wind. Every 15 minutes I hear the Freiheitsglocke, the liberty bell that was a gift from the American people to West Berlin. And every Friday, when I cycle past the Rathaus on my way to pick up fresh produce at the Wochenmarkt, I think of Kennedy and the half-million Berliners who gathered in the streets of Schöneberg to catch a glimpse of the young president and cheer on his message of freedom. In the Rathaus reception area, everything still looked as if Willy Brandt himself would be there to personally greet me.

Fortunately, the civil servant at the Einbürgerungsbüro, the naturalization office, was a friendly, easy-going, handsome man in his mid-40s with a thick turtleneck, jeans and what I suspected was a Northern German background. I handed him my Einwohnermeldeschein, my resident registration form, along with my citizenship application form and a passport photo. He then explained that there were a couple of other things I would have to bring in: a certified birth certificate, my apartment lease, my tax return from the previous year and proof of my knowledge of the German language. For that final reason alone, it’s good that I waited 25 years to do this.

I also had some homework to do. I had to write a letter explaining my decision to take on German citizenship and also make an appointment to take the citizenship test, which comprises 33 questions on deutsche history and laws, the deutsche government as well as deutsche cus­toms and practices. He suggested I visit an online portal that contained test questions – www.deutsch-werden.de – to prepare for it. Everything went very quickly! And there was still so much I had to say! For example, that the decision wasn’t easy for me, that my American citizenship would always remain a part of my identity, that I value my life in Deutschland very highly and see it as a privilege to become a citizen of this country. I wanted to assure him that I do really deutsch things all the time: I wear slippers, I’m a member of a Verein, I’ve been to Mallorca and when I travel abroad, I miss that delicious deutsches Brot. But my time was up and the next future German was already waiting.

Being the nerd I am, I went online right away. The previous year, I had won €50,000 on behalf of a good cause on a TV quiz show called gefragt-gejagt. I knew that if I showed some chutzpah and prepared properly, I would be able to pull off a total citizenship-test coup. I even had fun answering the questions. The questions reminded me of the theory part of my deutsch driver’s license exam and the subsequent seemingly useless queries about braking distances and trailer hitches. It was information I would probably never need, but maybe it was still a good idea to know it. I posed some of the questions to my Bremen guy, Marian and my technician Max from Köpenick – all of them highly educated Germans! None of them was able to answer the questions. Who wrote the text of Germany’s national anthem? How many years are members of the Bundesrat elected to serve? Are judges in Germany members of the executive branch, the judiciary, the plan­ning authority or legisla­tive authority?

At this point, what I really want to do is create a game show – Let’s get deutsch! We could do the naturalization test live with a glamorous jury of prominent German personalities: Motsi Mabuse, Jorge Gonzalez, Franck Ribéry and me. Günther Jauch could be the host. We wouldn’t just have exciting questions, we could also have activities like cutting garden hedges, stuffing Maultaschen (Swabian ravioli), deciding which bottles go into the recycling box versus which ones have a Flaschenpfand, complaining in every situation and – of course! – singing Helene Fischer’s song “Atemlos” by heart. In the end, the winner would get a German passport and the runner-up can use the audience joker to come back one more time.

I organized all my citizenship paperwork on my desk, including all the necessary documents in the original form and as photocopies. I put them in transparent sheaths and sorted them chronologically and in alphabetical order.

I placed them in a new Leitz folder and put a sign with the word EINBÜRGERUNG (naturalization) on the side. I felt very deutsch.

I had picked up my certified birth certificate at Brockton City Hall. Until that moment, I hadn’t really looked at it too closely. But now I took it into my hand and had black-and-white proof that I existed: Gayle Kathleen Tufts, born on June 17, 1960 in Brockton, Massachusetts. It had the names of my parents and an address that I hadn’t lived at for 40 years. These were my origins on an official DIN-A4-sized sheet of paper. Next to it lay my American passport with its signature dark blue leather cover. That little booklet will always mean a lot to me, but does it really make a difference whether my passport is blue or red? Does it make me someone different than I am today? A piece of paper doesn’t define who I am. And let’s be honest, all I have to do is open my mouth for everyone to know that I’m an American woman.

Gayle Tufts
is a critically acclaimed entertainer, author and intercultural contributor, often cited as “Germany’s best-known American” (Stern Magazine). She has written and produced her own hit shows in theaters, festivals and opera houses as well as appearing frequently on television and radio. Tufts breaks the language barrier by presenting her work in “Dinglish,” an insightful mix of German and English. Her shows are based on her own experiences and observations of everyday life as an Ausländerin (foreigner) in Berlin and are a celebration of German-American friendship in all its complexity. Her most recent book American Woman: How I lost my Heimat and found my Zuhause was published in 2017 by Aufbau Verlag. 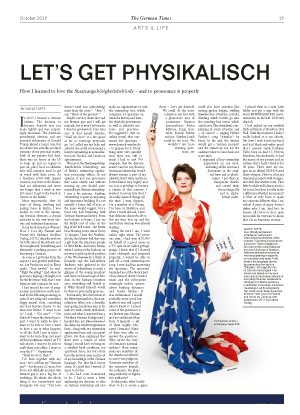