It appears that the impasse relating to Huawei is finally coming to an end. Starting back in May 2019, a heated discussion had emerged within the EU as to whether or not the controversial Chinese tech giant should be involved in the expansion of the ultra-fast fifth-generation (5G) mobile network in Europe.

Ever since, two distinct fronts have stood almost irreconcilably opposed to one another. On one side are the representatives of EU security authorities and intelligence services, who fear that Huawei could spy on European mobile networks and sabotage critical infrastructure on behalf of the government in Beijing. On the other side are industry representatives, a majority of whom is in favor of using Huawei’s services because they see it as the only way to avoid lagging behind other countries in the high-speed digital age.

The European Commission has now come up with what looks like a way out of this stalemate. In late January, after months of negotiations with member states, it announced that it was explicitly opposed to excluding particular 5G providers per se from the European market, arguing that the decision as to whether a supplier is considered risky or not must be made solely on the basis of specific security considerations.

At the same time, Brussels presented a bundle of recommendations designed to minimize the risks involved in setting up 5G networks – including an instruction to keep suppliers that had been classified as “high-risk” out of critical areas of the network. The commission included among these risks any influence coming from a third country.

In other words, Huawei will now be permitted to participate in the expansion of the 5G network in the EU, but under strict conditions. Does this mean that all’s well that ends well? Not at all. The US government, in particular, reacted very angrily to the European decision. After all, it was US President Donald Trump who declared a telecommunications emergency in the US last May as part of his trade war against China. This was the point at which the US Department of Commerce put Huawei on a kind of blacklist, and since then, the Trump administration has urged all of its international allies to similarly refrain from using Chinese mobile phone technology for reasons of cybersecurity. An extra component of this request was a thinly veiled threat that the US would restrict intelligence cooperation if it felt it had to.

Even if the US government is more concerned with China’s expansive economic policies than with actual data security, the suspicion that Huawei could carry out surveillance on behalf of the Chinese government is entirely justified. Indeed, Chinese intelligence laws require that private sector companies assist state intelligence agencies on the collection of information whenever requested. However, the US has so far been unable to provide any evidence to support its allegations.

As long as this evidence is unavailable, the German government is not eager to automatically ban Huawei from participating in German networks. As Chancellor Angela Merkel has made clear from the very beginning, she is in favor of a more moderate approach that would include increased security requirements and stronger controls.

Merkel’s posture on the issue, however, has caused a measureable degree of uneasiness, not only in Washington, but also in Berlin, and even in her own party, the CDU, and among her own ministers. Foreign Minister Heiko Maas (SPD), in particular, is intent on ensuring that “political trustworthiness” is an essential criterion for the approval of any 5G suppliers. On the other hand, Economic Affairs and Energy Minister Peter Altmaier (CDU) and Interior Minister Horst Seehofer (CSU), like Merkel, are against the complete exclusion of Huawei.

The European Commission’s decision has now provided Huawei supporters with some tailwind. All parties involved already agree that other providers should also be involved in the development of 5G networks, a move that would increase technical diversity. In addition, all parties agree that Huawei should be excluded from security-related network and system components.

One compromise proposal currently under discussion stipulates that the German Interior Ministry has the authority to exclude providers from involvement in 5G-network expansion if they run contrary to any of Germany’s “predominantly public interests” or “security policy concerns.” In addition, a strict system of compulsory certification for all equipment is also in the works.

It’s hard to believe that the US government will be satisfied with this compromise, especially since Berlin knows full well that such an arrangement cannot offer 100 percent security against spying and sabotage. The fact that the EU ultimately decided in favor of Huawei has one simple and weighty reason, namely that most EU countries are highly reluctant to forgo the economic benefits of a relationship with Huawei and China.

Industry experts agree that Huawei offers by far the most modern and affordable 5G technology worldwide. It is already being used in two-thirds of commercial 5G networks outside of China; it is far greater use than the technology provided by its competitors, including Nokia, Ericsson and ZTE. Mobile phone companies are using this argument to put pressure on the deployment process, warning that the expansion of the economically key 5G network would be delayed by years if the Chinese equipment supplier were excluded.

At the same time, the economic powerhouse that is China is tightening the reins to a noticeable degree. Today, the annual volume of trade between China and the EU is roughly €600 billion. In the 20 years since 2000, the exchange of goods between the two trading partners has almost tripled. The EU thus has zero interest in jeopardizing its relationship with such a powerful economic partner. This applies especially to Germany, which is more dependent on foreign trade than many other EU member states.

Beijing is well aware of this fact, that is Germany’s Achilles’ heel. In December, China’s ambassador to Germany, Wu Ken, warned that the Chinese government would not take a German boycott of Huawei lying down. Wu pointed out that a quarter of the 28 million cars sold in China in 2018 came from German production facilities, an implicit threat that drew the attention not only of German car companies, but also of authorities in Berlin itself.

In other words, a European turnaround is long overdue.

An economic predicament such as this leaves hardly any room for something akin to free choice. In fact, it makes one thing all too clear: Even if it looks like the trade dispute surrounding Huawei and 5G has been settled for the time being, the EU still faces tremendous challenges with regard to its economic future.

In the next couple of months, the first thing EU member states must do is agree on how to secure and control their vitally important communications infrastructure. They have until the end of April to implement the recommendations stipulated by the European Commission. After that, they must once again discuss whether the steps taken up until now are sufficient or whether further protective measures are required.

Yet this alone won’t be enough. In recent years, the EU has gravely neglected the research and promotion of key digital technologies in its own sphere; in that same time span, China has grown into a global superpower. This failure is now taking a bitter toll, as the Huawei case shows. It would behoove the EU to clarify as quickly as possible how it intends to achieve digital and economic sovereignty moving forward. Only then will it be able to counter growing pressure from the US and the Far East. 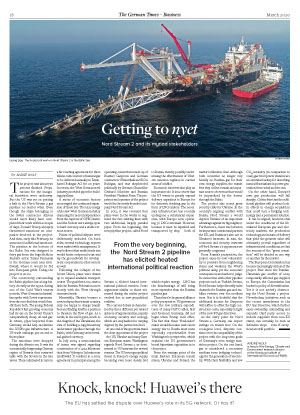