EU officials worked meticulously on the development of the climate crisis package, even though the official language of the program was noticeably stilted: “A major element of the new development model will be to decouple future economic prosperity from environmental pollution.”

The idea was to help the economy, all the while guided by a clear goal. In order to achieve this goal, however, the Commission in Brussels needed money, its own money, raised on the capital market – in other words, joint public debt. But until now, the raising of public debt had been a process reserved solely for EU member states.

The above description could easily apply to the recent internal papers issued by the European Commission regarding the management of the economic crisis caused by the COVID-19 pandemic. But the quote is drawn from a different era; it is almost 30 years old and can be found in the white paper of then Commission President Jacques Delors under the title: “Growth, Competitiveness, Employment – The Challenges and Ways Forward into the 21st Century.” In the early 1990s, Delors – a friend of then-Chancellor Helmut Kohl and a man once referred to as “Mister Europe“ – was eager to get out of the economic crisis by means of European credit for investment in Europe’s infrastructure and environment-friendly technologies.

But the West German government rejected Delors’ plan, with Kohl’s coalition government in Bonn arguing that “reduced state intervention at the national level must not be offset by increased subsidies from the community.” Soon thereafter, however, the Federal Republic of Germany would introduce the largest package of subsidies in its history – as a means of financing German reunification. The country’s Sonderkonjunktur, a state-financed path to economic development, soon led them head over heels into debt. Germany had become “the sick man of Europe.”

Three decades later, the current plan is to allow the European Commission to take on €750 billion in debt to confront the economic consequences of the COVID-19 pandemic, especially in Spain and Italy. The EU budget will be liable for the debt and also responsible for servicing and settling it. The plan from European Commission President Ursula von der Leyen has been given the name “Next Generation EU” and is designed to send out a clear sign of solidarity. €500 billion will go to the member states, €250 billion of which will be in the form of repayable loans, the rest as a non-repayable grant. Italy will benefit from a lower interest rate, as Brussels has a higher credit rating than Rome.

As part of this redevelopment project, Ursula von der Leyen’s Commission intends to set up programs to finance projects in northern Italy and other needy regions in Europe. A sum of €9.4 billion has been earmarked for EU4Health – a health program designed to help member states overcome the pandemic. This money could flow directly to hospitals.

Does this mean that funds from the capital market bonds issued by the European Commission will go straight to its target recipients with no detours?

For supporters of European integration and the path towards a “United States of Europe,” this would be something to celebrate. It might even be “a Hamilton moment for Europe,” as German Finance Minister and Vice Chancellor Olaf Scholz (SPD) put it, recalling the first US Treasury Secretary Alexander Hamilton, who bundled the country’s fiscal responsibilities at the federal level in 1790 as a means of generating common revenue. This would be much in the vein of Jacques Delors, the great champion of Europe and a social democrat like Scholz.

Bundestag President Wolfgang Schäuble (CDU) recently brought this grand idea down a notch, but even he, who always opposed joint European debt, speculated in an interview with Der Spiegel that this could be a moment in which Europe – as it has done so often in the history of its integration – would perhaps pull closer together in the face of adversity.

Perhaps. If it weren’t for all those tricky details involved in the battle between national sovereignty, European solidarity and community spirit – plus the current EU Lisbon Treaty. After the constitutional treaty of Europe failed in Dutch and French referendums, the treaty served to reinforce the EU as a community of nation states as opposed to an integrated community.

In actual fact, thanks to its so-called Cohesion Fund, the European Commission has for years had funds at its disposal with which it can finance projects in nation states directly on site, such as social organizations in Padua or a bridge in Catalonia. Many infrastructure projects bear the EU flag upon completion, often with a small note indicating that the EU fund has co-financed the project.

In the case of the COVID-19 crisis, however, the European Commission and Council have chosen a different path. The EU Council alone will make decisions regarding these programs. This is not the case with the existing cohesion fund, where decisions are made by European Parliament. In other words, the only EU body legitimized by the citizens of Europe through direct democracy, i.e. European Parliament, will forgo the use of its sharpest sword, at least partially.

But does this approach to dealing with the effects of the pandemic actually represent an historical moment and evidence of EU integration in the wake of so many difficult years of bickering over Brexit and the euro debt crisis?

Speaking to The German Times, the Austrian politician Othmar Karas – a vice president of European Parliament, one of the most influential conservatives in Brussels and a figure instrumental in handling the euro debt crisis – said: “We need the ‘Next Generation EU’ program and a long-term, future-oriented EU budget in order to ensure social and economic reconstruction across Europe after the COVID-19 crisis. It is a joint political project for the reorganization of Europe – comparable to the internal market and the euro.”

In order to ensure that the large sum of money pumped into the system is given a modicum of democratic legitimacy, “all EU programs through which ‘Next Generation EU’ funding will flow will be decided upon by means of the co-decision procedure, with the full say of European parliament,” says Karas. So it’s the right to contribute to the decision-making, but not the right to actually vote.

The question still remains as to how exactly the funds will be allocated in the coming years. A well-established procedure already exists for funds from previous EU budgets that are jointly controlled by European Parliament and the European Commission: projects are proposed by the regions and member states, funding is applied for in accordance with pre-defined funding rates, and the allocation of these funds is managed by EU officials in Brussels. Cities, municipalities, regions, national governments and even the private sector participate in these projects by contributing additional funds.

One thing that remains unclear is who exactly is supposed to pay for this post-COVID-19 reconstruction. A strengthening of the current system would be in the interest of EU member governments, in particular those in the north. Especially when it comes to Italy, the “frugal four” – Austria, Denmark, the Netherlands and Sweden – have repeatedly accused the country of siphoning away the EU’s money into the dark channels of the Mafia.

The path out of the crisis now being taken bears all the signs of a European compromise borne out of great need. It was paved by French President Emmanuel Macron together with Chancellor Angela Merkel. Macron brought into play the idea of European Commission bonds. Merkel realized the terrible consequences of continuing her negative line in the context of the greatest challenge “since World War II,” as she described it.

“Luckily, Chancellor Angela Merkel noticed in time what was at stake,” economist Nouriel Roubini told Der Spiegel in mid-June. “It was not possible for Berlin to be against EU budget growth and the ECB playing a greater role, and at the same time be surprised when everything goes down the drain,” said Roubini. “At that point, Europe would be dead.”

So the European Union will now have two budgets. The first will be managed by European Parliament, and the second – the COVID-19 budget – will be handled by the European Commission, which will pump money into the capital markets. According to the plan, the Commission will soon start to collect its own taxes to be able to service the debt resulting from the COVID-19 budget. It is not yet known whether it will be a digital tax or a financial transaction tax, but it will most definitely be something.

In the coming six months of Germany’s presidency of the EU Council, the facts that the European Commission is actually going into debt to combat the crash caused by the pandemic and that the European Union has pulled together at all during this crisis will no doubt be repeatedly celebrated as major steps forward for the European idea.

Frank Hofmann
is a journalist and historian specializing in Europe, the US, human rights and international relations. He has worked as a correspondent in Brussels, Paris, Kiev and the Balkans. 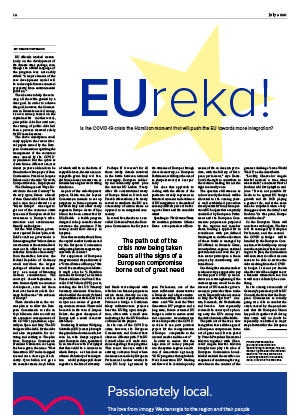