According to Immanuel Kant, a very German philosopher, “Words without perception are empty, for they are mere formal thoughts devoid of purpose.”

Alexander Grau’s essay on what he calls “a German specialty” offers plenty of definitions of what political kitsch is at its core, namely “sentimental empty phrases, obtrusive touchy-feely-ness and overblown gestures of concernedness.”

The sacralization of everything worldly is kitsch, he claims. The basis of kitschy thought is the notion that reality is actually something else. Kitsch is the helpless attempt to ennoble the trivial and the ordinary. In longing for a world that is warm and fuzzy and wholly unhurt, kitsch praises pure conscience over rational thought. And so on.

Grau writes for Cicero, a glossy political magazine with centrist bearings. His short book reads at times like a Wikipedia entry on the history of political thought since 1789. It’s so schematic that even when following his basic premise, the reader is tempted to interject: “Not so fast!” At other times Political Kitsch reads like a 120-page David Brooks column – broad sociological statements stuffed with apodictic certitude.

Grau’s essay suffers from an absence of real people, fleshed-out thoughts and any ideas that either he or the reader could deconstruct. The author seems to harbor a vague dislike of perceived progressive do-gooders, yet fails to mention even one. The kitschy perceptions he rails against come across as cartoonish; even if people actually think in such illusory terms, they may not be worthy of Grau’s haughty takedown.

Toward the end of the book, he claims German intellectuals have always been aware of kitsch and happy to point to how much everyone else was living in a dream world: “Kitschy is always the other guy.” Duh. Grau’s hollow plea for undefined rationality and an undiluted world he never adequately depicts ultimately comes across as the definition of kitsch itself. Blood of the liberals

The Frankfurter Allgemeine Zeitung, Germany’s conservative paper of record, recently reported that Jan-Werner Müller had turned down the opportunity to take over Herfried Münkler’s post as political science professor at Humboldt University in Berlin. Until his recent retirement from one of Germany’s most prominent universities, Münkler had been a preeminent scholar and his position there highly coveted. Müller’s rejection of the post is evidence of how profoundly he has developed and moved beyond Germany’s often rigid scientific and journalistic borders. Today, Müller teaches at Princeton University and writes in both German and English. His most recent book has been published in German only, with a translation likely to follow.

In Furcht und Freiheit (Fear and freedom), Müller makes the case for “a different kind of liberalism.” Drawing on the famous 1989 essay by Latvian-born Harvard professor Judith Shklar, who escaped Nazi persecution and fled to North America, Müller sets out to update and redraft her notion that a “liberalism of fear” draws its strength not from abstract theory, but from historical memory. For Shklar, the  lesson was to learn to understand suffering, rather than to find “logical proofs in moral philosophy.”

Müller, of course, writes very much in the vein of a professor steeped in academic discourse, albeit with a keen sense of the political fault lines beyond classroom debates. He argues for a more inclusive understanding of the oft-maligned identity politics: “The goal is to better realize the principles of freedom and equality that are widely shared, not to undermine them in the name of the particular.”

What unifies people should not be their backgrounds, but rather their commitment to the notion that rights be negotiated for everyone. For example, workers’ movements have always been more than just lobbying organizations for employees demanding higher wages for one group – it was “a joint cultural project to preserve dignity.” As we know it

For years, Bernd Ulrich has been publishing the most erudite, well-reasoned and original pieces on the state of politics in Germany and the world. In 2017, he wrote a brilliant assessment of the political and moral decline of the West and the divergent public perceptions of it – nationalist and progressive alike (see the October 2018 issue of The German Times).

But it was a personal essay Ulrich wrote later that year about becoming a vegan that was his most-read and most-debated article. Ulrich had had his come-to-Jesus moment. Critics and trolls alike accused him, as they are wont to do, of proselytizing. What Ulrich actually did was study religion – or rather atheism – to understand just what made so many people overly defensive if not angry when confronted with the data and implications of man-made climate change.

Ulrich is deputy editor-in-chief of the weekly Die Zeit, the progressive paper of record, or, as he calls it, the “central organ of middle-of-the-road rationality.” In his new book Alles wird anders (Everything will be different), which focuses on the looming “age of ecology,” Ulrich delivers a fully developed political argument for a complete upending of climate policy.

However, the book is far more than just another plea to save the planet from climate doom. Ulrich forcefully deconstructs the shoddy reasoning for inaction beyond the usual suspects of unadulterated greed, right-wing denialism and complacency. His main argument is that German politics since 1945 has held centrism in such high moral regard that meaningful, if not radical, change is inconceivable.

This very German notion has long served a noble purpose. Ulrich himself has been one of its most eloquent advocates. Still, he says, the ingrained fossil-centric way of life has become so extreme as to blind people to the costs in lives and euros and to impel Germans to blame other places and other peoples. No debating, haggling or shouting match about climate change should commence without first digesting Ulrich’s praiseworthy insights. 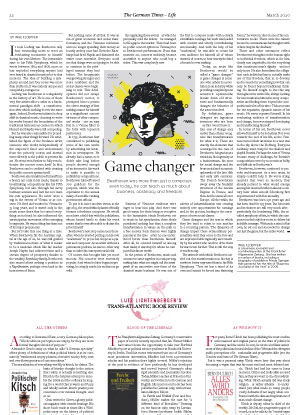