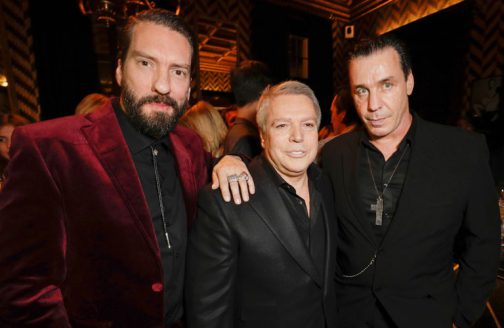 German perfection, French charm, Moroccan temperament and American modernity – these are the characteristics Patrick Hellmann (64) uses to describe his own designs. But they are also an apt description of this Berlin designer himself. His father was a Berlin fashion merchant, his mother was Spanish and he was born in Casablanca in 1955. The language spoken at his father’s studio was Italian, and the family spoke French at home. When Hellmann was nine years old, his family moved to the United States, and in 1978 they moved to Berlin.

His mother still lives in Cincinnati, and Hellmann is planning to visit her there this month to celebrate her 90th birthday. “For me, it’s still like coming home,” he explains. Although he holds only a German passport, he does possess a coveted US Green Card. And now, Hellmann is looking to establish even more connections with his former home, this time via business ties.

Having had a shop-within-a-shop at Barneys in Manhattan until the US financial crisis in 2008, Hellmann is eager to return to the city that never sleeps. “The city has an unbelievable positive energy,” he gushes, “you can feel it as soon as you get off the plane.” Hellmann also sees Los Angeles as a perfect potential location for one of his stores. Of course, he already knows “there’s nothing anywhere that doesn’t already exist in the US.” But he’s still convinced that his collection will be able to make a mark on the American fashion market. Indeed, in keeping with the credo of his company, he has “the power of a perfect suit.”

With the help of this motto, Hellmann made his way to the top of the fashion industry. He now owns and operates eleven stores from Berlin and London to Moscow, Dubai and Baku, each designed in his characteristic black, white and silver. With the exception of the two in Berlin, all of Hellmann’s stores are operated as part of a franchise. Russians even rank his luxury brand PHC label higher than Brioni and Tom Ford.

And now it’s time to add a store in the US. The perfect fit of a Hellmann suit makes every man look good: “New Yorkers are very fashionable, so they’ll appreciate that,” he argues. He himself rarely goes shopping on any of his regular trips to New York. “I always wear the same thing,” the designer admits – a black sweater (cotton in summer, cashmere in winter), dark blue jeans, ankle boots – and done. Hellmann is less interested in himself and much more interested in making his clients look their best. Stars like Rammstein lead singer Till Lindemann (56) and German national soccer player Jerome Boateng (30) are big fans of his work.

Hellmann also recently translated his perfectionist sensibilities to the realm of interior design. In 2017, he bought Berlin’s legendary Schlosshotel in the Grunewald, which was built in 1914 and lies in a verdant and elegant part of the city. A number of hotel chains had already tried their luck with the hotel and failed, even though German fashion czar Karl Lagerfeld himself had given it a thorough restyling. It is entirely possible that Hellmann, a successful entrepreneur, assumed the risk for sentimental reasons. Indeed, when he first came to Berlin in 1978, Hellmann was invited shortly thereafter to a reception at the Schlosshotel in the Grunewald: “I immediately fell in love with this wonderful place,” recalls the designer.

The Renaissance-style hotel was also where German actress Romy Schneider (1938–1982) got married – twice. And its famous Jugendstil bar was often the last stop of the night for beloved German comedian and enthusiastic drinker Harald Juhnke (1929–2005), who lived just around the corner. In 2006, Germany’s national team stayed at the five-star hotel during the Soccer World Cup.

Hellmann has now re-designed 22 of the 53 total rooms and suites (starting at €180/night). He even gave the bar a fresh new outfit: there’s herringbone from his suit collection on the chairs, and the curtains feature pinstripes facing out and violet tie-silk facing in – his favorite color. “Each room tells a story taken from my own life,” says Hellmann, explaining the personal touch at his exclusive hotel. His international guests appreciate this individuality to such an extent that “some even want to spend every night in a different room,” says the hotelier, grinning.

There is only one room at the hotel that Hellmann will most certainly not be redesigning, and that is the personal suite of Karl Lagerfeld. The famed Chanel designer, who passed away in February, equipped the room with personal furniture and art objects. “We are very proud that Karl Lagerfeld set up this suite, and the most we will ever do is refresh it a bit,” insists Hellmann, who attaches great importance to maintaining his hotel’s reputation for fashion. This coming summer, he also intends to reopen the 5-star hotel’s restaurant, Papillon, where upscale international cuisine will be served.

According to Hellmann, his hotel snuggled within the tranquil Grunewald forest is ideal for “guests who want a true sense of privacy.” The entrepreneur himself, who lives with his wife and fiveyear-old son in Berlin-Mitte, has been designing the interiors of private homes for years, and also created the Lalique Suite (€16,000/night) for the five-star Hotel Prince de Galles in Paris. This means there’s only one thing this Berlin designer is still missing: “Of course, I would love to redesign a hotel in New York.” 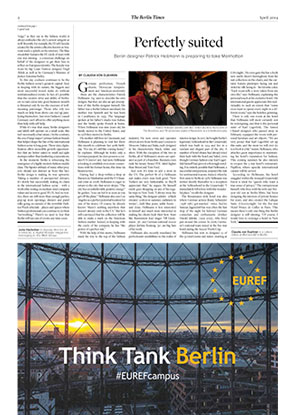