Non-German friends of mine like to think we Germans celebrate German Unity Day by throwing a big party. I personally don’t know anyone who actually celebrates the national holiday on Oct. 3. It’s just a day off work, a day to relax, take a mini vacation, do some gardening or binge-watch TV.

Still, I was invited to a German Unity Day party once. It was organized by the German Embassy in London. I remember the snow-white villa in the affluent district of Belgravia, the red carpet draped over the stairs and the room full of pinstripe suits. Although most of the men in attendance were simply the office heads of German savings banks in London, they dressed as if they were English bankers. I watched the West Germans celebrate German unity. I watched them celebrate themselves.

I can still see the ambassador, a tall, good-natured man from Swabia, sashaying across the thick carpet as the Filipino house servants dressed in livery brought freshly tapped German beer, sausages and meatballs to the guests. The famous German singer Marius Müller-Westernhagen sat in the corner nibbling on a sausage. That evening, I met only one other woman from the former East Germany; she worked as the embassy’s deputy spokesperson, and together we walked around that West German party as if we were strangers.

The preamble to Germany’s constitution states that Germans achieved their unity and freedom in “free self-determination.” This is the official story of what happened; the story that gets written in books. And it’s not wrong per se. But it’s also not the whole story.

There’s a famous photo that was taken at the first German Unity Day celebrations on the steps of the Reichstag in Berlin in 1990. It features an entire generation of West German politicians: to the very left, we see the then-social democrat Oskar Lafontaine, former Chancellor Willy Brandt, the then-Foreign Minister Hans-Dietrich Genscher, Hannelore Kohl, Helmut Kohl and then-Federal President Richard von Weizsäcker. Next to them, small and thin at the edge of the photo, stands Lothar de Maizière, the last head of government of the GDR. The image speaks volumes on the unequal balance of power that prevailed at the time of German reunification. It also says a lot about the root cause of the problems and misunderstandings that continue to this day.

“Taking leave of a social and political system doesn’t mean letting go of personal memories,” wrote Hans-Dieter Schütt in his book Glücklich beschädigt (Happily damaged). To this day, many people in the East feel as if they’ve lived two lives; the life they actually remember living and the life they were told they’d lived by the harsh verdict of history. According to Schütt, East Germans were asked to decide whether they’d been supporters of the system – thereby subjecting themselves to doubts about the nature of their character – or whether they were willing to admit that all of the passion and hard work they’d put into the system had been in vain. Schütt wrote this in 2009.

Perhaps one thing that has changed since then is that this two-sided experience has led to the emergence of an eastern German identity. As Moritz von Uslar observed in his 2019 book Nochmal Deutschboden (Deutschboden again), people flipped that feeling of inferiority – of being left-behind, second-class citizens – and transformed it into the very opposite: “The fun that an eastern German gets from being able to tell those arrogant western Germans to their faces that nobody wants to have anything to do with their pretty democracy, their turbo capitalism and their Western values – that fun is just getting started.”

When the photo mentioned above was taken, de Maizière could not have had any idea of this nascent anger. In 1990, he had been given the task of presiding over the dissolution of the GDR. In the space of six months, his job was to dissolve a state that had existed for 40 years. It was “a farewell without tears,” he said in a speech at Berlin’s Schauspielhaus on Oct. 2, 1990.

“That wasn’t entirely true,” de Maizière admitted in a recent interview with the Berliner Zeitung. Whereas West Germans were able to go on living as they always had, he argued, East Germans were shaken to their core in a way unlike any time since World War II. “I always thought the process of reunifying the infrastructure and the economy was going to be difficult, and that psychological reunification would be easier. In the end, the opposite was true.”

We East Germans don’t celebrate on Oct. 3. We work, we scream and shout, we beg for attention. Oct. 3 is one of those rare moments when all of Germany turns to look at the East – when, for a change, people are actually interested in what we have to say. It’s a time when former government heads, civil rights activists and other contemporary eyewitnesses are asked to give interviews or contribute essays. Books are penned in anticipation of the big day, plays are written and we all take a quick look back at the GDR before it turns and sinks again into oblivion.

On every other day, the West-dominated media are only interested in the East when election time rolls around, at which point they send special teams to Saxony to find out exactly what’s going wrong there again, and especially why the “Ostler” – the easterners – are so bent on voting for the wrong party. Years ago, the big “East” theme was the Stasi, the former GDR’s security apparatus; but today, it’s the right-wing political party known as the AfD. This is the case despite the fact that the West is home to all of the AfD’s top functionaries and the western states of Bavaria and Baden-Württemberg deliver the party large numbers of votes. This is not a complaint, not a sociological finding. It’s just an observation.

The SPD politician Wolfgang Thierse once suggested that people from eastern and western Germany should tell each other their stories; this was his idea of how the two sides could be encouraged to grow closer. German President Frank-Walter Steinmeier expressed a similar sentiment last year when he offered that people should “listen to each other.” However, coming 30 years after the fact, the latter request is possibly just too late. Plus, it’s quite clear that eastern Germans are the only ones telling their stories. Eastern Germans feel a constant pressure to justify and explain themselves, to elucidate the issues driving their behavior. In reality, however, when they do this, they’re actually bowing down and subjecting themselves to western Germans. The eastern German curriculum vitae will always be seen as a deviation from the norm, the one that needs to be explained, the special path.

I, too, spent the past several years doing a lot of explaining. And now I find myself increasingly wondering whether this was the right thing to do or whether my work only reinforced a cliché. This is why I don’t think much of those online initiatives launched by younger eastern Germans, such as “Wir sind der Osten” (We are the East), even though they’re obviously well intentioned. In short, they want to show that the East has more to offer than just neo-Nazis. Yet, in doing so, they take up a position in an established hierarchy that’s existed ever since tall and portly Helmut Kohl pushed small and thin Lothar de Maizière to the outer edge of the picture – here top dog, there bottom dog.

On a warm night this past summer, a show called “The crazy ‘80s in Germany” was broadcast on the public TV channel ARD. The show was all about music and pop culture in the 1980s; unfortunately, the GDR wasn’t mentioned once. At a subsequent editorial meeting, I expressed my astonishment that an omission such as this could happen 30 years after German reunification, and I recommended that we ask the broadcaster how this came to pass. In response, a colleague of mine noted: “The show was probably produced by WDR [West German Broadcasting]. For them, the East is very far away. That’s just the way it is.” Another colleague explained: “Sabine, the show was about the eighties. You weren’t German back then.”

And here’s another anecdote for good measure: a friend of mine wanted to write her doctoral thesis about the selling-off of GDR publishing houses but was not able to find a university in Germany willing to supervise her work. So she went to the US and completed her doctorate there. Her book was published in English first, and when she applied for positions in Germany from the US, she immediately got a job.

All our explaining and storytelling has done little to change the fundamental structures. Eastern Germans continue to earn less and acquire less wealth than their western compatriots. No large corporation has its headquarters in the East, and only recently have we seen one (!) eastern German rector at a university in eastern Germany. While it’s true that our chancellor grew up in East Germany, there are hardly any eastern Germans in top political positions. In fact, more than half of the state secretaries in eastern German ministries come from former West German states; that figure rises to three-quarters when it comes to the heads of political departments. There are even more Americans than eastern Germans on the boards of Dax-listed companies. Is it any wonder that 57 percent of eastern Germans surveyed in 2019 said they felt like second-class citizens?

My son is almost six years old and enjoys asking big questions in the evening just before he goes to bed: What’s the biggest threat to mankind? Is there a medicine that works against COVID-19? Why does everybody have to die? Sometimes we just talk about the day we had. One day, I told him about my meeting with de Maizière. What’s the GDR, Mama? I told him about the country that disappeared overnight and how everything changed for me back then: the money, the language, the school, the rules. I was still a child myself at the time.

My son listened intently as I told my story. “But why did you guys put up with all that?” he asked. It was hard to explain that I wanted those Western clothes, I wanted to travel, I wanted that Western music; but I didn’t want Kohl’s federal republic. Next generation, it’s your turn now. 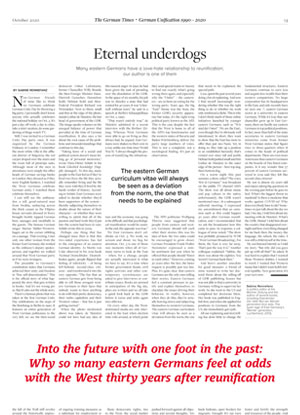