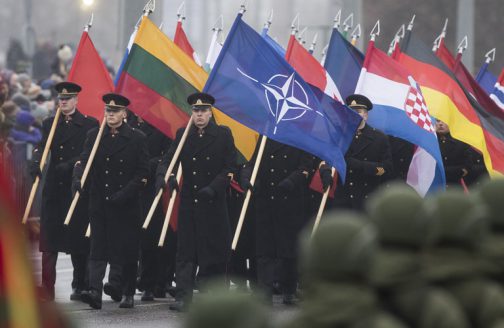 If solidarity is a valuable commodity, then the West was heaven on earth. It doesn’t matter that NATO and the various European communities started out as emergency solutions. They were the answer of North American and Western European states to the specific challenges posed by the Cold War. The actions, especially in Eastern Europe, of Stalin and his successors were seen as so dangerous and unpredictable that Western nations were prompted to close ranks.

From that moment on, there was a West, which means that without the East, there would not have been a West. Without this threat from the East, it would have been hard to imagine such enduring solidarity among Americans, the British and the French – not to mention the inclusion of a part of Germany so few years after the end of the Nazi regime.

These countries and their inhabitants shared a canon of values, determination to protect freedom from external dangers and, last but not least, a strong desire to assert their national independence. Together, they fought to avoid suffering the same fate as the GDR, Poland, Czechoslovakia, Hungary, Bulgaria and Romania, all of which were occupied by the Soviets after 1945, not to mention the Baltic States, which were fully incorporated into the Soviet Union.

This situation put the Americans in an incontestably strong position right from the start. Thanks to the fact that they alone were able to guarantee the independence of their allies in the nuclear age, the Americans used their bridgehead in Western Europe not only to push through their legitimate national interests, but also to solidify an uncompromising policy of supervisory control over their partners.

And then, in 1991, something happened that no one had expected: the Soviet Union, including its empire and the Warsaw Pact, collapsed and disappeared. It would have been only logical if the West, too, had exited the world stage following the East’s departure.

Instead, the opposite occurred. Everything in the West remained the same. The West’s associations continued to operate on the stage they had occupied for decades. In fact, they even beefed up their cast. However, in doing so, NATO and the EU either ignored or forgot to enact precisely those reforms that would have been necessary to adapt to the new – shall we say “East-free” – situation.

The West also took in stride that by incorporating a slew of Eastern and Central European countries into its alliance, they changed the geopolitical architecture of the continent. They ought to have known that this process would have inevitable effects on Russia in particular, especially as the Soviet Union – whose legacy Russia inherited in 1991 – had undergone a no less radical shrinking process in the course of its own implosion.

The young states of Eastern and Central Europe naturally had the full right to seek admission to the European Union and the Atlantic Alliance. But did anyone seriously think the Kremlin would stand by and watch these countries join the EU and even NATO, in particular, without reacting?

And the Western alliance went even further. In the spring of 2009, the EU entered into an “Eastern Partnership” with six former Soviet republics, for all practical purposes forcing them to choose between the West and Russia. Yet another far-reaching step was NATO’s decision to station Western troops in former Soviet republics and Warsaw Pact countries, and to include Ukraine – which wasn’t even a NATO member – step by step into its military operations.

In the eyes of the Kremlin leaders, this was evidence of NATO’s expansion to the East and the permanent deployment of American troops in, for example, Poland, which began during the US presidency of Barack Obama meant above all one thing: NATO was now only 200 kilometers away from St. Petersburg.

This could be dismissed as a bit of paranoia on Russia’s part, but that would do nothing to change Moscow’s perception of the situation. From the Russian vantage point, the radical eastern expansion of NATO and the build-up of the American missile defense shield in former Warsaw Pact states are two links in a tangible chain of escalation. For Putin and his team, these moves provided the jumping-off point to break international law, annex Crimea and start a war in Eastern Ukraine.

These actions revive an old image of Russia, the archenemy of the West. While the downfall of the Soviet Union meant that NATO had won the Cold War, it also stripped the Atlantic Alliance of its fundamental raison d’etre. But since it simply clung to its treaties and stuck to its adversarial concept, it had to keep the East – and everything associated with it – alive. The fact that Vladimir Putin regularly nourished this image of the East as a threating enemy, at least according to the West’s interpretation, lent it additional credence.

Of equal consequence is the continuation of America’s supervisory control. The fact that US troops remained – at the express wish of the Europeans – exactly where they were after the collapse of the Soviet Union in 1991 meant that no one in Washington had any reason to give up or even modify their approach toward their junior partners on the other side of the Atlantic.

As radically as Donald Trump proceeds to break with US diplomatic and political norms, he is nevertheless retaining the attitude that his predecessors have held since 1949 with regard to US partners and allies. Of course, pulling out of the Iran Deal in May 2018, the subsequent cascade of sanctions and the suspension of the INF Treaty in February 2019 are legitimate actions in and of themselves. There are even comprehensible reasons for pursuing each of these steps.

However, what is most concerning is the fact that America’s partners in Europe – whose security status is at stake in both regards – are confronted with a fait accompli and, at least from their own perspective, have no alternative but to succumb to Washington’s measures. In this sense, the US and its president are continuing the path taken set out upon in 1949, much in the same way that the Europeans are unwilling to abandon the logic of a world that disappeared in 1991.

Yet, even if they wanted to, they couldn’t. And this is due to their adamantly nurtured conviction that if they did, they would be helplessly exposed to the dangers and imponderabilities of world politics without the help of the US. This might actually be the case, but it is also a consequence of the Europeans’ inability to pool their strengths and create the conditions for a joint capability to act – including militarily – on the world stage.

The number of failed attempts since 1950 to create an autonomous European Defense Community is too high to count on one hand. Ultimately, when push comes to shove, Europe relies on the US. As also laid bare in today’s eerie discussions about a joint Western maritime mission in the Persian Gulf, nothing has changed. In this sense, solidarity in the Alliance remains a one-way affair.

The fact that Trump himself is also making this very point does not automatically mean that it is wrong. When his ambassador in Berlin points out that the US defends Europe, but that Germany, in particular, doesn’t pay what it “should pay,” it’s a reproach that all German chancellors have got to hear at some point in their tenure.

The president’s complaint is no exception. Indeed, there is not one member of the Western community that has failed to complain about a severe lack of solidarity on the part of at least one other fellow member. Still, if this solidarity falls by the wayside, the bonding agent vital to hold the community together will be dissolved. In other words, it’s no surprise that selfishness and solo initiatives have been booming since 1991. All in all, they testify to a massive failure to live up to the immense challenges of the present and future.

What we are indeed witnessing is the widespread collapse of a pledge that was made in 1945 and maintained its raison d’etre until 1991: to respond in unison to an external threat. Today, the US president is not only toying with the idea of an American withdrawal from NATO, he is actually carrying it out, for example, when he unilaterally terminates or suspends agreements like the INF.

In a similar vein, the dissolution of the EU did not begin with Brexit. The refusal of the vast majority of European countries to participate significantly in accepting migrants, refugees and asylumseekers along with the inability to agree on binding rules to save the environment in the face of a global climate catastrophe are symptoms of a glaring lack of unity.

This gradual dissolution of NATO and the EU represents an implosion that holds immense potential for danger. At its core, it is an apolitical and in many ways irrational reflex to a political vacuum. This vacuum emerged almost 30 years ago when no one could come up with an answer to the crucial questions being posed at the time, namely “Who are we now?” and “Where do we stand?”

From this perspective, it would be the essential task of Western leaders to become masters of their fates again. Unfortunately, such far-reaching community reforms now appear dead on arrival. Such changes would have to be so profound and so meticulously carried out that NATO and the EU would soon become more than the historical reminders of a chapter in world politics long since past. Even the founding nations of Europe don’t have the courage and the strength to make that happen.

For these reasons, the UK’s exit from the EU and the US withdrawal from NATO should be seen as an opportunity. The goal of the West should be to complete in orderly fashion a process that has already been underway for a long time. This is no capitulation, but rather a return to the active shaping of policy. The eventual dissolution of those old monstrous anachronisms should not be confused with the abandonment of proven political, economic and military structures. On the contrary, the orderly and effective removal of a cumbersome corset is the prerequisite for making a brand new start. And there is no reason for this subject to be taboo.

Gregor Schöllgen
is a professor of history. He taught at the University of Erlangen and at the German Foreign Office and was a visiting scholar at Columbia and Oxford universities as well as at the London School of Economics and Political Science. In 2017, his book Krieg. Hundert Jahre Weltgeschichte (War. 100 years of world history) was published by DVA. 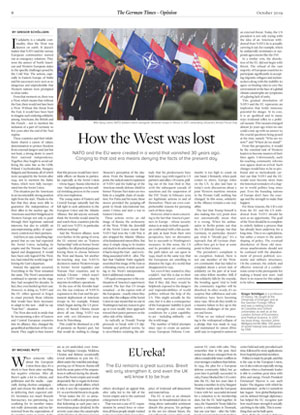