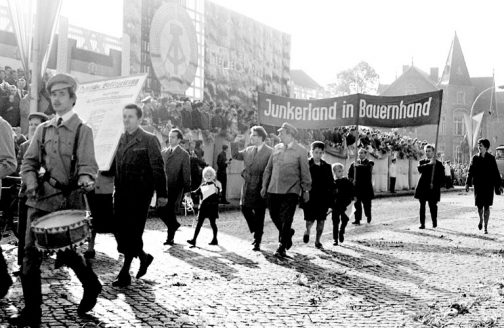 While welfare recipients in Germany are required to disclose extensive details about their wealth and possessions before they can receive benefits, data on large-scale property owners is at best nebulous. Why the double standard?

Germans love to argue about issues of wealth and poverty. In most cases, they focus on money and taxes, that is, on wages, salaries, savings and inheritances, whether in the form of cash, savings, securities, machinery or factories. In contrast, the subject of land ownership usually only comes up when a property owner makes some sort of ill-advised move – like blocking access to a public lake adjacent to their property.

This is odd, especially when the question of who owns the land on which people live, farm and raise their livestock has for centuries served as a defining issue in every society. For example, in the preindustrial age, when agriculture was essentially the only means of wealth, demands for the fair distribution of land were of utmost concern and responsible for most of the era’s uprisings. Everyone was acutely aware of the fact that those who owned the land held the power to decide what could be done with it.

Throughout history, those who wielded this power were never the ones actually working the land. If farmers were ever also owners of their land, it didn’t stay that way for long. In England – the motherland of commerce, colonialism, industrialization and modernization – masses of peasants were driven from their farms and thus from their livelihoods starting in the 10th century. Over 500 years ago, Sir Thomas More described the brutal process of “enclosure” in his seminal work Utopia:

“Your sheep […] that commonly are so meek and so little; now, as I hear, they have become so greedy and fierce that they devour men themselves. They devastate and depopulate fields, houses and towns. For in whatever parts of the land sheep yield the finest and thus the most expensive wool, there the nobility and gentry, yes, and even some abbots, though otherwise holy men, are not content with the old rents that the land yielded to their predecessors. Living in idleness and luxury without doing society any good no longer satisfies them; they have to do positive evil. For they leave no land free for the plough: they enclose every acre for pasture; they destroy houses and abolish towns, keeping only the churches – but only for sheepbarns.”

Sheep “devouring” people. In fact, those groups who held power – nobles, clerics and wealthy city residents – earned their money from sheep’s wool, which prompted them to drive peasants out of their villages, fields and pastures, confiscating more and more space for more and more of their sheep. This process was facilitated by the United Kingdom’s “land title” system, which asserts that whoever can produce the oldest title deed to a given property is the automatic owner of that property.

In the legal process of “enclosure,” the rich sheep breeders took advantage of the ignorance and illiteracy of rural populations, for example, by presenting fake property deeds – sometimes even from the Roman era – and taking the land from farmers by seemingly legal means, often with the help of aristocratic and later bourgeois judges.

In an attempt to avoid starvation, those farmers who had been robbed of their land then moved to the cities, where they ultimately created the basis of the lower classes. For want of alternatives, the members of these lower classes then made up the sailors and soldiers for the ships and armies of the empire – and later the workers in the factories. Thanks to colonialism, the system of “land titles” went on to spread first to what later became the United States and then throughout the entire British Empire, which meant that similar land appropriation processes also took place in large parts of the world.

As farmers represented an obstacle to lucrative sheep breeding, their “liberation” was granted at the end of the 15th century in England. In the European regions that were to become the first German state, however, the abolition of the rural population’s personal obligations with regard to aristocratic and ecclesiastical landlords began much later and did not come to an end until the 19th century.

In Europe, too, wealth was measured not by money but in terms of land ownership, and this continued well into the modern era. On the continent – including in those areas belonging to the future German states – farmers were not the owners of the land they tended; they merely had the right to use the land. This right was granted to them by their landlords and was not hereditary, that is, it could be taken back at any moment. In order to be permitted to cultivate the land, farmers had to pay levies to the landlords and serve as their front-line soldiers.

There were large differences between the regions of what would later become Germany; in many sections, large estates dominated, while others were more like patchworks comprising small or even smaller latifundia. And “common land” continued to exist for a long time, especially in areas that were less attractive in agricultural terms. This “common land” belonged to everyone and was used collectively, just as it had been prior to the emergence of feudalism. For example, in the Lüneburger Heide, all the way up to the beginning of the 19th century, farm properties were the only things privately owned; the forest and heath belonged to everyone and were shared by all, for example, for the grazing of pigs.

Although the recording of land ownership in the area that was to become Germany began in the 10th century, it was carried out solely on a regional basis and according to very different measures and norms. The first actual Grundbücher, or land registers, were launched in 1868, but not throughout the entire German Empire, which was soon founded in 1871. Today, while practically every single square meter in Germany belongs to either a person or the state, there are still no meaningful figures that can answer the key question of who exactly owns what land.

While every person in Germany who applies for the welfare payments known as Hartz IV must disclose the full extent of their wealth and possessions, data on large-scale property owners is nebulous at best. Although Germany’s Federal Office of Statistics has meticulously recorded how many homes were built since the end of World War II, clarity on who owns what and their current worth is elusive. Even the value of property belonging to the public sector is not known: the Federal Ministry of Finance only started gathering data to determine what belongs to the state in 2016. To this day, even church leaders – whose predecessors in feudal society were property lords similar to aristocrats – do not know the exact number of properties and buildings in their possession. In fact, as non-profit organizations, these religious communities don’t even have to know.

The assumption today is that two-thirds of the area of the former West Germany is privately owned: farmers and foresters account for roughly 34 percent, private individuals 22 percent, communal owners 5.5 percent and small businesses 3 percent. Just under one-third belongs to the federal government, state governments and municipalities, and 4 percent of the land is owned by churches. The rest is shared by housing companies, banks and other companies.

Not only is this ownership structure exceedingly unfair, it also rarely changes. In fact, scarcely more than one-tenth of one percent of property changes ownership each year. Forests, fields and meadows have sometimes been in the hands of one family for generations. These families are often of noble origin, even 100 years after the abolition of the monarchy. Today, only 34 percent of German forests belong to the state, whereas 50 percent of them are owned by roughly two million private individuals. The five largest swathes of privately owned forests are in the hands of aristocrats.

An exception to this rule is the land in the former East Germany. After 1945, the communists ruling under the Soviet occupying forces dispossessed the aristocratic Junkers who had, until then, played a major role in agriculture. However, the new owners of the 30 percent of the land that went to farm workers as well as small and “new farmers” – including many farm workers and displaced persons from the areas of the former German Reich that no longer belonged to Germany after the World War II – were not able to enjoy their new land for long. In 1952, the communists began to group the Junkerland they had just handed over to farmers into collectivized enterprises based on the Soviet model. Anyone who refused to join the new “agricultural production cooperatives” (LPGs) was either forced to do so or had to leave the GDR.

The degree to which this forced collectivization continues to shape the former East Germany to this day is clearly recognizable from a bird’s-eye-view; while the land belonging to the former West Germany looks like a patchwork of small and medium-sized meadows and fields, if you look down on the five states of the former East Germany when arriving at any regional airport, you’ll see huge agricultural areas dominating the landscape. The current owners of these areas are often so-called rote Junker (red Junkers), that is, former directors of former LPGs.

Ownership of built-up land is also distributed differently in the former GDR than in former West Germany. In the East, the rate of home ownership is just under 35 percent, while in the West it’s more than 44 percent. This means that more than half of residents in both eastern and western Germany do not own the home they live in. Private ownership of real estate, houses and apartments also varies significantly from region to region. For example, almost 60 percent of Saarland residents own a home, whereas in Berlin it’s only 12.7 percent.

There are historical reasons that explain why so few Germans own their homes: In World War II, almost half of the country’s residential real estate was either badly damaged or destroyed. The resulting lack of an estimated six million homes was only accommodated gradually after 1945 by years of massive state support for social housing. Today, while only six to seven percent of the population lives in social housing, the residential space previously used as public housing was not sold – as one might expect – to the people living there, but instead to companies, many of which belong to wealthy individuals and families.

More and more foreign investors are also now investing in real estate in Germany; in 2015, roughly 68 percent of buyers came from abroad. Considering the widespread ignorance about land ownership described above, it will come as no surprise that here, too, there is no data with regard to who is actually buying, owning and reselling real estate in Germany.

Is property an intimate thing? Are Germany’s property owners afraid? If so, who and what are they afraid of? Revenge by the dispossessed? The envy of others? Taxes? The “property is theft” argument put forth by anarchist Pierre-Joseph Proudhon certainly has a polemical touch to it; however, it is hard to refute the fact that the land now privately owned and covered in private buildings at one point belonged to someone other than the current owner. Or to no one at all. Or to everybody.

Rüdiger Rossig
is an editor at Deutsche Welle. 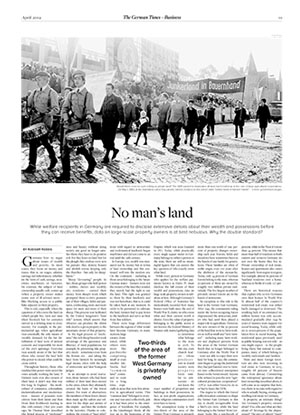