There are, no doubt, many pediatricians and health experts in Germany today who wish they lived in France. That neighbor to the west recently added eight new names to its list of mandatory immunizations – one of which was the measles vaccination – bringing the total to 11. Even to the south in Italy, where the situation is slightly more complicated, mandatory vaccinations have nevertheless proved effective. But in Germany?

After a series of measles cases at schools and childcare facilities caught the German public’s attention this year, calls for mandatory vaccinations have become increasingly louder – once again, one should say, considering numerous attempts in the past have yielded nothing concrete. Although the proposed mandatory vaccination would apply to measles alone, the indignation is still great. In fact, many experts fear that compulsory immunization would even lead to increased public resistance to an otherwise entirely reasonable health care measure.

Since early April, the homeopaths and anthroposophists who practice widely in Germany have been collecting signatures for a petition against mandatory vaccination, which they are going to submit to the federal government and the Bundestag. After only two days, the petition had one-fifth of the signatures required.

This form of resistance is palpable not only in Germany. The measles are making a comeback in the United States, too. In early April, the Centers for Disease Control and Prevention reported that the number of confirmed measles cases in the first three months of 2019 exceeded the total number of cases nationwide the previous year.

Back in Europe, it was only 10 years ago that Bulgaria was forced to learn the bitter lesson of just how fast things can develop when an unvaccinated person travels abroad, gets infected there and – while still showing no symptoms – brings the measles back with them. After seven years without a single case of measles in Bulgaria, a man transported the virus from Hamburg to Sofia, causing the deaths of at least 24 people and prompting more than 24,000 people, including many Roma, to fall ill in that country alone. That particular epidemic eventually extended to 11 countries. And yet, in spite of stories like these, far too many people in Germany and around the world continue to ignore the facts.

The measles is not a children’s disease. The virus is actually highly contagious and spreads easily through the air people breathe. And it can kill. Prior to the launch of the first vaccine 56 years ago, up to 2.6 million people died each year of the measles, most of them children under the age of five. But the measles is life-threatening to adults as well. In fact, complications related to the disease, such as the brain inflammation (encephalitis), are even especially common in old age.

Still, even though the World Health Organization (WHO) has made great efforts to eliminate the disease by means of vaccination campaigns and, in doing so, has prevented more than 21 million deaths in the period from 2000 to 2017, roughly 110,000 people still die each year from this morbillivirus. It is already clear that the goal of eliminating the measles in five of the six WHO regions by the start of the coming year will not be achieved. And Germany is playing an inglorious role in this failure, as outbreaks of the disease continue to take place in the federal republic.

A glance at vaccination rates in Germany provides little immediate evidence as to why this is the case. The most recent report issued by the Robert Koch Institute, Germany’s highest epidemiology authority, showed that German children entering primary school have a very respectable vaccination rate of around 93 percent. This is almost enough to achieve the form of indirect protection referred to as “herd immunity,” which would protect non-vaccinated individuals from getting the measles. However, Germany’s otherwise fine record is cluttered with a number of local and age-related gaps.

For example, it has been shown that educated and high-earning parents from Baden-Wurttemberg and Bavaria, in particular, are the ones who fail to vaccinate their children. At less than 90 percent, the average vaccination rates for children entering primary school in these southernmost states lie well below the national average. Add to that the fact that every fourth to fifth child of childcare age nationwide – as well as many adolescents and adults – have never been vaccinated against the measles or have received the first dose only, which provides incomplete protection.

Why are people rejecting vaccination? Is it out of convenience? Or sheer ignorance? The tragic death of an 18-monthold in Berlin four years ago showed that even pro-vaccine parents can simply forget to have their children vaccinated. The scant few scientific surveys of skepticism toward vaccinations (“vaccine hesitancy”) that have been conducted in Germany suggest that although the number of true anti-vaxxers in the country is low, the unease often felt by parents is compounded by reports of supposed side effects associated with the vaccination. To make matters worse, these fears are then propagated to larger audiences via social networks, childrearing books and films such as Eingeimpft (Germany, 2017) and Vaxxed (USA, 2016).

Some families are even pursuing a special form of health awareness based partly on conventional medicine, but also on an esoteric image of physical integrity and self-healing. These families often vaccinate their children, but they tend to do so at a later date than officially recommended, that is, when they feel the child is more robust. Sometimes they base their decision selectively on the parent’s own personal sense of the risks.

The key challenge is therefore by no means to silence radical anti-vaxxers. Instead, the most important goal should be to raise awareness of the extent to which non-vaccinated individuals are endangered by measles. People need to understand that non-vaccinated individuals pose a threat to their direct environment as well as to more distant ones, as the Bulgarian case has shown. This is why mandatory vaccination has long since become a political issue – far longer than since the recent spike in the number of measles cases.

While specialist politicians with expertise in the field such as Karl Lauterbach (SPD) and ministers in the CDU/SPD grand coalition regard mandatory vaccination as the correct approach, the left-wing opposition parties, including the Greens and the Left, are pro-vaccine yet want nothing to do with mandatory vaccinations.

They argue that Germany should instead pursue a policy of “persuasion” and “education” designed to stop anti-vaxxers in their tracks. Green Party health expert Kordula Schulz-Asche recently noted that mandatory vaccinations would not solve the real problem; instead, she argued in favor of reaching out to parents as a means of protecting unvaccinated adults and children. What Schulze-Asche did not discuss, however, was how mandatory vaccinations for kindergarten and elementary school children would conflict with a policy of educating adults and older students.

It is not surprising that the various associations that have been providing this “persuasion” and “education” for decades now see things differently than many Bundestag members. Once again in March, the Association of Pediatricians in Germany (BVKJ) and the German Pediatrics Society (DGKJ) came out very strongly in favor of mandatory vaccination.

In the meantime, in environments at higher risk of a breakout, it has become clear that a system of mandatory vaccination anchored in law would bring great relief to schools, childcare facilities and health authorities. Indeed, whenever the virus emerges from its slumber and starts to widen its impact, the first response is to prevent the spread, which means closing schools and childcare facilities and checking the vaccination status of children and adolescents. Pupils at a Hamburg school recently had to have their blood taken to determine whether they were immune to measles or not.

A program of compulsory vaccination, like that recently passed by the Brandenburg state legislature, could prevent the virus from being introduced into childcare facilities and schools. And it might finally make it clear to adults how important it is to have vaccine protection against the disease. Not least for themselves.

Kathrin Zinkant
is a science editor at Süddeutsche Zeitung. 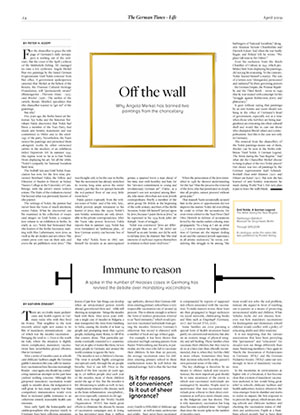