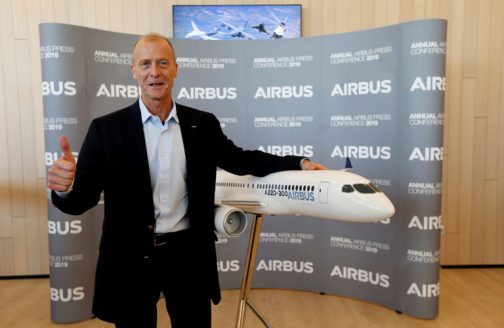 It had to be those red cowboy boots. “My favorite shoes, very comfortable,” Tom Enders says, raising his jeans a bit to show off his footwear. His last meeting with the media in a Munich hotel, no pressure any more. Enders is relaxed and in a good mood, his aides will confirm that this has not always been the case in past years.

He just received his first lifetime achievement award, and of course he showed up in Washington, D.C., wearing a tuxedo and the red boots. Enders also just turned 60, which in combination with the award is “a good reason to be depressed,” he says.

He either is or isn’t an extremely good actor. 2019 marks a break not only in the life of the Airbus CEO, but also in the history of the company where he held a leadership role for almost 20 years. Enders retired from his position at the close of the annual general assembly on April 10. Just days after that meeting in the Munich hotel, he was replaced at the helm by Guillaume Faury, 51, who has led the commercial aircraft division as president since early last year.

He has big shoes to fill, and not just literally. Enders transformed Airbus in many ways. Created as a European project in 1969, almost exactly 50 years ago, it is now no longer strictly a European company, nor is it a company that governments have much control over any more. It is (almost) a normal company and a champion in global aerospace.

Airbus has a global footprint that includes final assembly lines in China and Mobile, Alabama. Last year, Airbus made Canada its fifth “home country” after France, Germany, Spain and the UK, following the acquisition of the C-Series jet program from struggling Bombardier. And another, second final assembly line for the aircraft, now called the A220 in Airbus typology, is under construction in Mobile. “What I enjoyed most in my job was the international nature of the business. It would be hard to go back and work for a purely German company,” Enders says.

He has seen it all. In the late 1990s when he was in his late 30s, Enders was responsible for strategy as well as mergers and acquisitions at Daimler-Chrysler Aerospace (Dasa). He helped orchestrate the merger with Spain’s Casa and France’s Aerospatiale to form what was then called EADS. For some years, he served as co-CEO of EADS along with Louis Gallois – the idea of a balance of power between the French and the Germans was still primary. Later, Enders took a step back and became CEO of the commercial aircraft division for five years, a business with which he was not very familiar, having earned his wings on the defense side of the equation. He wanted to get to know the unit better – by far the group’s most important – before being solely in charge. In 2012, Enders took over following the retirement of Gallois. And only a few months into the job, he attempted to take one giant step further in deal-making. He had quietly negotiated a merger with BAE Systems to be able to put EADS on a broader base – combining its strength in civil aerospace with BAE’s exposure in defense. But much to his surprise, the German government blocked the deal for fear that German jobs could be lost. Enders was furious. “Forgiven, but not forgotten,” he says about the episode today.

He has reasons to forgive. The merger failed, but the intervention by the German government scared the French government so much that it was willing to give up power in order to keep the Germans away from it, too. “In 2012, there was a very real risk that EADS would become a French-German government joint venture,” Enders recalls. In that eventuality, he would have resigned. But miraculously, a new corporate governance was agreed on – one that limited the powers of governments and gave Enders more freedom to act.

He refocused the company and gave up trying to strengthen defense. Instead, aggressive growth in civil aviation was now the target. His decision, still as Airbus Commercial CEO, to launch a re-engined version of the A320 narrow-body aircraft turned out to be a huge success. Around 6,500 aircraft were ordered since the 2010 launch decision, more than any other civil type in history. The move ensured Airbus could continue to make massive profits off its short- and medium-haul aircraft family while limiting investment.

At the same time, the A321neo, the largest version, turned out to be an airline favorite because of its long range and low costs. The A320neo family forced Boeing to quickly launch the 737 Max, without which it would have lost a key account at American Airlines to Airbus. The Max ensured that the two would share the deal. The global Max fleet is currently grounded following two crashes. It has already lost market share vis-a-vis Airbus and the intense discussion about its safety is not making the recovery any easier.

Enders has had his share of problems, too. For years, he and his colleagues have tried to score more A380 orders. Enders was around as the program was launched in 2000, when European aerospace executives thought they had to build an aircraft to compete with Boeing’s 747. What they didn’t see was that the 747 was already in decline and the smaller 777 was rising. Airbus’ own A350, launched in 2007 at the peak of the A380 industrial crisis, and Boeing’s 787 are now eclipsing even the 777; they have lower costs per seat than even the much larger aircraft, making them redundant. Enders took responsibility and shut the program down two months before his own departure.

It was a move that made Guillaume Faury’s start easier. But Enders has long come to the conclusion that it is impossible to hand over a company in perfect condition. “There is always something left to do; there is constant change,” he says.

Plus, he was initially not quite ready to leave. One of his toughest fights was against corruption. A Paris-based Airbus marketing unit was at the heart of a scandal that may cost Airbus vast sums in penalties. The unit used “consultants” to help broker commercial aircraft deals. Enders and CFO Harald Wilhelm were trying to end the practice but found strong internal resistance in the unit against interference from corporate. In late 2017, the French media was suddenly full of stories about an alleged or real power struggle inside Airbus. Enders decided that the only way to end the damaging public debate was to resign.

Now, more than a year later, he seems to be at peace with his decision. And he is even more open to voicing criticism where he believes it is necessary. Airbus is looking at making its defense products as free as possible from Germany-built components in order to be able to export them in spite of the government’s strict position on defense exports. But Enders is concerned that common European programs such as a new fighter aircraft may not happen with German participation if the German government is not willing to compromise on policies with its partners.

These are issues Faury now must face. Enders has been clear that he no longer wants executive jobs; he has no plans to go into consulting, but he will take board positions. And he has big plans in aviation – his career as an enthusiastic helicopter pilot is now set to take off. 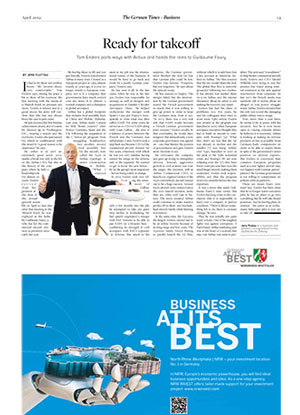