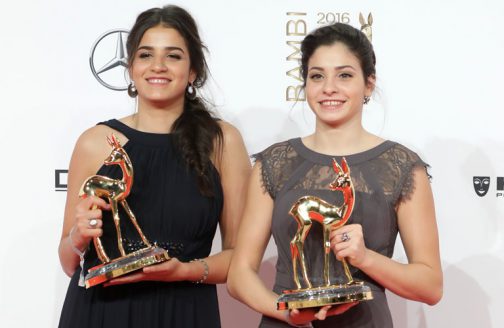 Two sisters. Their father is a swimming coach; both started swimming at a very young age. They trained, they competed and their lives were like those of lots of children from ordinary middle-class families. Yet there is nothing ordinary about these sisters. They come from Syria where they had to flee the war. From Lebanon they traveled to Turkey, and from there they crossed the Mediterranean to Greece. When the engine of the inflatable boat they and countless other migrants were crammed into suddenly broke down, they leapt into the sea and helped keep the boat above water for several hours. They made it to the coast and from there to Macedonia and Hungary and then finally on to Germany, where they caught the attention of the media. Two female Syrian swimmers who saved others from drowning while fleeing the war – their story catapulted the two young women into the global spotlight.

The girls’ odyssey ended in Berlin in 2015, and from that point on the sisters’ stories have taken diverging paths. Yusra Mardini is now 21 years old. In Germany, she took up where she had left off in Syria: training to swim. She joined the swimming club Wasserfreunde Spandau 04, where sports officials noticed her and nominated her for the new refugee team that was to compete at the Olympic Games in Rio de Janeiro. Yusra qualified and by the time she clambered out of the pool after her races in 2016, she had become an international star and one of the few feel-good stories of the global refugee crisis. She met Barack Obama and the Pope. Time magazine named her one of the world’s most influential teenagers.

Yusra is now also a special ambassador for the UN Refugee Agency. She travels the world and takes the stage at events. In one interview, Yusra announced that she wants to use her fame to give other refugees hope. So she tells her story repeatedly, most recently in a book titled after her favorite swimming stroke – Butterfly – in which she recounts how her family’s home in Syria was caught between the front lines, how their house was destroyed, how a bomb hit their local pool. After bombs forced the family to move six times in two years, the sisters realized they would rather risk their lives and flee Syria than continue living in a war zone. Their mother then sent her daughters to Europe with a relative. Yusra can still clearly remember sitting with her sister in the plane from Beirut to Istanbul. It was full of Syrians and the cabin crew threatened to arrest anyone trying to bring a life jacket with them. Since fleeing Syria, she has avoided the sea, says Yusra. But she still wanted to keep swimming.

In Arab countries, people look askance at a female swimmer, a woman in a swimsuit, said Mardini in a 2018 interview at Berlin’s Olympic Stadium. “People thought I was just doing it to meet men.” In Germany, she was able to prepare for her next big dream, the 2020 Olympic Games in Tokyo. She trains for three to five hours a day. She might have been a refugee, “but when I’m in the water, I’m an athlete.” She is often asked whether she feels she’s living a dream with her story, which has taken her from a refugee boat to the Olympics and then to meeting the US president and the Pope. But she assures people that they wouldn’t want to trade places with her. She and her sister have lost so much, “and we just want peace.”

This could all end happily ever after. The Mardinis’ story could stand as an example of how you can achieve it all, even if you’ve had to leave everything behind to flee a war – that is, if it weren’t for Yusra’s sister Sarah, her elder by three years. Sarah injured her shoulder on their journey to Europe and had to give up swimming. She went to Lesbos, where in 2015 she washed up in an inflatable raft and nobody would sell her any water, even though she had money to buy it. Sarah resolved to save other refugees from this sort of experience. She was active as a lifeguard and helped settle the refugees arriving in boats when they washed up on the coast. She volunteered at the refugee camp on Lesbos, where thousands of refugees still live in the worst possible sanitary conditions in a tent city designed for far fewer inhabitants. Sarah served as a translator and interpreter, looked after the children and bought washing machines with donated money so the refugees could at least wear clean clothes.

But in the eyes of the Greek authorities, she was committing a crime. In August 2018, Sarah and three dozen other helpers were arrested and accused of human trafficking, membership in a criminal organization, money laundering and spying. It was alleged that Sarah had cooperated with people smugglers and communicated with them over encrypted networks to bring people illegally to Lesbos.

Sarah denies these accusations. She has personal experience with the methods used to exploit people fleeing their countries, so she would never make common cause with human traffickers. Prosecutors had no proof of Sarah’s alleged crimes and in December she was freed on €5,000 bail and allowed to leave Greece for Germany. However, her trial in Greece wages on. Greek authorities are seeking to criminalize the work of voluntary refugee helpers on Greek islands, said Sarah’s lawyer, Zacharias Kesses, at a December press conference in Berlin. Sarah’s case highlights the challenges confronting NGOs, those rescuing people at sea and others helping refugees across Europe; these heroes operate in a legal gray area and face increasing pressure from a range of unsympathetic governments and critics.

The two sisters don’t see much of each other at the moment. They both travel a lot and each has her own life. Yusra is training in Hamburg, while Sarah lives with their parents, who were also able to leave Syria, in the German capital, where she is studying politics and economics at Bard College Berlin. The last time the wider public saw the two sisters together was in 2016, when they were honored with a Bambi Media Award. The award they received was in the “Quiet Heroes” category.

Verena Mayer
is an editor for the Süddeutsche Zeitung in Berlin.

When Neil Armstrong, “Buzz” Aldrin and Michael Collins flew to the moon 50 years ago, they used German technology

By Philip Artelt and Nana Brink 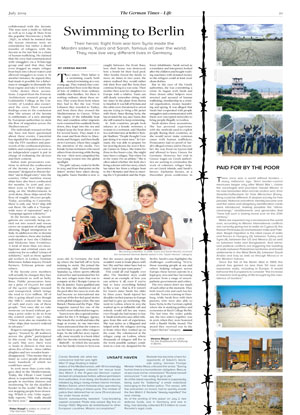