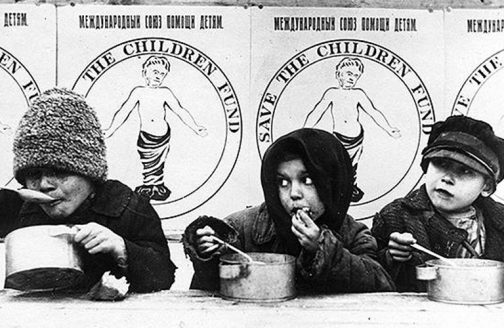 London 1919, disgruntled locals were gathered around a donation stand holding rotten apples in sign of protest against the two sisters who were collecting funds for the children of the war. They were insulted as traitors. „Feeding the enemy’s children“ just after World War I was quite a provocation, but also a very courageous act.

This didn’t suffice to intimidate the sisters; Eglantyne Jebb and Dorothy Buxton continued their fundraising endeavours for children, until Jebb was arrested in the same year for distributing shocking leaflets that depicted the famine of children affected by the war. Upon this, she was tried for her protest, and found guilty. However, the judge on the case was so impressed with her charitable efforts that he offered to pay the five pound fine himself, thereby making him the first contributor to the Save the Children Foundation.

One must remember, after World War I ended, Britain kept up a blockade that left children in cities like Berlin and much of the rest of Germany starving. Malnutrition was common, and the sisters decided that campaigning alone would not be enough – direct action was needed.

In May 1919, the Save the Children Fund was put into effect at a packed public meeting in London’s Royal Albert Hall. In spite of the initial resistance from the English, Jebb made such a convincing case of the unjust prejudices against children of war, that donations flowed relatively quickly and so extensively that the Save the Children Fund was able to become active on a much larger scale, allowing Jebb to draft “The Declaration of the Rights of the Child” in 1922.

This vital document promoting the rights of children was adopted by the League of Nations in 1924, and furthermore by the United Nations in 1959. Ultimately, Jebb established a highly effective relief agency, that was able to provide food, clothing, shelter and money for the children in need.

In 1919 two sisters had a vision to protect children and their rights. 100 years later the foundation continues its efforts. Unfortunately there are still an estimated 420 Million children living in war zones, as the fight to Save the Children continues.

Front runner: Biking the Iron Curtain from the Arctic to the Black Sea