In the past several years, Görlitz, a picturesque town on Germany’s eastern border with Poland, has functioned as the backdrop to several major Hollywood films, including Around the World in 80 Days starring Jackie Chan and Arnold Schwarzenegger, The Reader with Kate Winslet and David Kross and The Grand Budapest Hotel featuring Tilda Swinton and Bill Murray. However, the town’s elegant facades conceal a weak economy and scores of elderly and discontented individuals who have lost faith in the future. In fact, so many “Görliwood” residents reject the EU and the political establishment in their nation’s capital that more than two-thirds of them voted for the far-right AfD party in elections held this past Sept. 1.

Nearly a million people in the states of Brandenburg and Saxony cast their ballots for the party called Alternative for Germany (AfD); that’s more than a quarter of all voters there. One out of four rallied behind politicians – both men and women – who have shocked the public with rightwing extremist, anti-Semitic, racist or otherwise inhuman remarks. Is Germany on a path back to its past?

In short, no. In the more heavily populated west, the AfD attracts far less support. Even in the AfD-friendly eastern states, nearly three-quarters of the electorate backed other parties. The AfD won neither Saxony nor Brandenburg. Plus, no other party wants anything to do with them.

The AfD had hoped and even expected to become the top vote-getter in these elections, which could have set the stage for Angela Merkel’s ouster. “Complete the revolution” was an AfD poster slogan during the campaign. To the outrage of many, the party claimed that the Peaceful Revolution, which had led to the fall of the Berlin Wall, had been betrayed and that conditions today resembled those of the communist past.

Luckily, the worst has been avoided, at least for the moment. Brandenburg will once again have an SPD minister president and Saxony one from the CDU. In Berlin, Merkel will remain chancellor, probably to the end of her term – if not even longer. The CDU might need her, for lack of any charismatic successors.

But what about the claim that the revolution remains incomplete? And why do so many former East Germans believe they are being shortchanged, ignored and treated like second-class citizens? The New York Times described a “lingering inequality between East and West three decades after the Berlin Wall fell.” The Washington Post wrote that the east of Germany “still suffers from higher unemployment and lower wages and pensions than the West, about 30 years after the country’s reunification.” But the truth is more complex.

Saxony’s unemployment rate is 5.7 percent, and Brandenburg’s is 5.6 percent, while the national average is 5.1 percent. In the western state of North Rhine-Westphalia, the rate is 6.7 percent, with peak levels of 13.4 percent in Gelsenkirchen and 10.4 percent in Dortmund. However, average wages in the east continue to lag behind those in the west. Last year, people in Saxony and Brandenburg earned 20 percent less than the German average. There are many reasons for these discrepancies. One-third of eastern Germany’s full-time employees work in the low-wage sector – that’s twice as much as in the west. More eastern German women work than do their western counterparts. These women earn on average 20 percent less than men. Eastern Germany has few big corporations and many rural, structurally weak and depopulated regions.

On the other hand, wherever corporate headquarters are, rents are rising and so are other costs of living. Pensions, meanwhile, are based on wages – including those earned during the Communist days of old. Meanwhile, pensions in the east have risen to 96 percent of those in the west. A complex compensation scheme has now been put in place to balance pension levels by 2024.

Low income does not automatically predispose people toward the AfD. The fact that most welfare recipients in Saxony live in Leipzig – where the party scored well below its average for the state – illustrates this simple insight. There are more important reasons for the rejection of “the system” and “the establishment” than empty wallets. One such reason lies in the past, another in the present.

Even 30 years after the fall of the Berlin Wall and the subsequent incorporation of East Germany in the Federal Republic, many eastern Germans still feel betrayed and sold out. Their industries, which were no longer competitive, were handed over as gifts to west-based corporations; barely 10 percent of all jobs survived; and with no savings to speak of, many slid toward poverty. Whereas in the GDR they had steady jobs, they now found themselves in long queues at the unemployment office.

To the present day, many eastern Germans also feel that their own historic achievements have received inadequate acknowledgement and appreciation. Indeed, this is a people who liberated themselves from an oppressive system without a shot being fired or any blood being spilled. In contrast, western Germans tend to regard the incorporation of Ossis as an act of West German charity and kindness. And it’s not untrue that West Germans quickly began scouring the east for a quick buck after the Wall came down, and soon found they could easily take their eastern brethren to the cleaners.

All this evolved into a chronic sense of inferiority. However, those who were able to turn their lives around and make a new start now fear they could lose everything again. The Brandenburg village of Hirschfeld, located at the Polish border, gained notoriety this September when more than half its voters, 307, cast their ballots for the AfD. Journalists describe the place as a charming village with decent infrastructure – and not a refugee in sight.

With its brash, loud and xenophobic populism, the AfD is sweeping up those individuals who are traumatized by the past and fearful of the future. The majority of voters are men between the ages of 30 and 60, without high school diplomas, let alone university degrees, and workers worried about their jobs. The fact that the AfD stands far to the right does not bother them, nor do the party’s various other scandals, financial embezzlement, public squabbling and internal party feuds.

Party head Alexander Gauland, who until 2013 was a member of Chancellor Merkel’s CDU with a respectable career in politics and the media, calls his new political home a “middleclass people’s party,” although its leaders attract attention through extremist remarks and crude language and frequently lack any kind of middleclass manners.

It would be a mistake not to recognize that it’s the rank and file that is steering the AfD leadership. The functionaries fulfill what their voters expect of them. Compromise with the established parties is considered treason. Anyone calling on the angry mob to calm down is accused of being a traitor out to curb freedom of speech.

Many of the AfD’s free-market and nationalist founders have since abandoned the party, leaving gaps for right-wing extremists to fill. The far-right wing is growing, taking the rest of the party with it. Countless right-wingers have made a career in the party and now sit in the Bundestag or in Germany’s regional parliaments – not to mention in the town halls, where funding for clubs and cultural associations is distributed. Gauland has resisted neither this drift to the right nor its radicalized rhetoric. He has adapted to it.

Following the killing of the Hessian CDU politician Walter Lübcke in June, the Berlin correspondent of the Neue Zürcher Zeitung, Marc Felix Serrao, quoted Bundestag President Wolfgang Sch.uble’s verdict that language had in the past already been a “breeding ground for violence and even murder.” The “uninhibited language” of the AfD, Serrao wrote, is like a smeared bathroom wall. Nothing about it is middle class. The language of the AfD, he wrote, can “make murderers.”

But to repeat: The AfD is small minority. In the European elections last spring, it polled only 11 percent of the vote. Unlike Marine Le Pen in France, the AfD in Germany is considerably further away from power. The classical parties, troubled though they are, are still the pillars of German democracy. 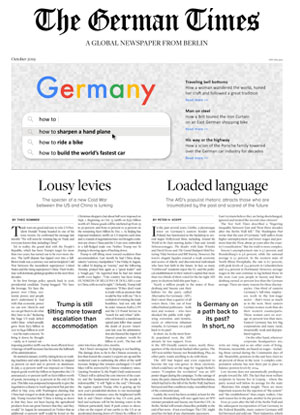