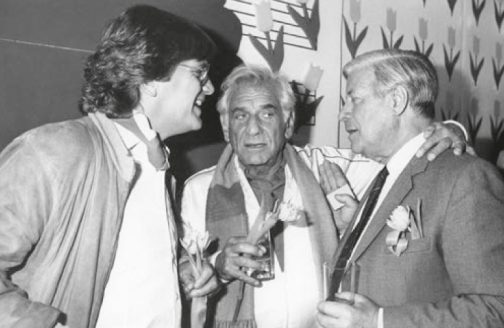 Helmut Schmidt (right), Leonard Bernstein (middle) and our author, the pianist Justus Franz in 1984. They founded the Schleswig-Holstein Music Festival, one of Germany’s most prestigious in Germany. Frantz remembers his friendship with Bernstein on the occasion of the conductor’s 100th birthday | photo credit: DPA

The music that led us to one another was Dvořák’s Piano Concerto in G minor. One night, after listening to the radio and hearing a recording I had made with the Northwest German Philharmonic Orchestra, Leonard Bernstein, who would have turned 100 this summer, invited me to play the piece with him and the New York Philharmonic. We became close friends, and soon he and his family were regular guests at my finca, or farmhouse, on the Spanish island of Gran Canaria.

The finca was also the place Lenny was looking to visit in 1985 after completing his Peace Tour, which had taken him and an international youth orchestra halfway around the world to Hiroshima, 40 years after the dropping of the atomic bomb. He had arrived exhausted in Vienna and was yearning for peace and quiet and seclusion. He was very much looking forward to staying at the finca, where he had already spent a great deal of time and where he had written many of his later works, including his only opera, A Quiet Place, and his last musical, 1600 Pennsylvania Avenue.

Unfortunately for Lenny, I had something completely different in mind for him! I wanted to raise his enthusiasm for the idea of launching a music festival in the northern German state of Schleswig-Holstein – and I wanted to do so on-site, as it were. But Lenny wasn’t convinced: “Schleswig what?” he asked. He had been looking forward to the warm and welcoming climate of the Canary Islands. In contrast, the summer in northern Germany that year had truly lived up to Heinrich Heine’s famous description; it had been “but a winter painted green.” Indeed, it had been raining constantly and the temperatures had barely reached 60. Nevertheless, I raved to Lenny about the Schleswig-Holstein sun. It was a pure lie. And it didn’t help.

So I asked my friend Helmut Schmidt, former chancellor of Germany and then co-publisher of the German weekly Die Zeit, for advice. He came up with the idea of doing a big interview with Bernstein and flying him in a private jet from Vienna to Hamburg. Lenny agreed – and after that, luck was absolutely on our side. We started having the most beautiful weather possible in the north. Lenny was able to swim, sail and play tennis. The government of Schleswig-Holstein even provided us with a helicopter to explore the beautiful landscape between the North Sea and the Baltic. Schlosshotel Tremsbüttel went so far as to adapt itself to Lenny’s “daily rhythm,” which meant breakfast between 2 and 3pm, lunch at around 9pm and dinner at 2:30 in the morning. We had a wonderful time. When he flew back, he said to me at the airport: “I fell in love with Schleswig-Holstein.”

Bernstein was always a teacher; he even sometimes called himself a rabbi. He was always a composer and a musician. He loved new things and the unknown. His thinking never followed a set trajec­tory; his was a liberal spirit. It is hard to fathom the sheer volume of his contribution to this world – and what he gave me personally! In the 1950s and 1960s, he helped us recognize the greatness of Mahler. Spellbound, we listened to his interpretations of Mahler’s 2nd, 3rd, 5th and 9th symphonies. Lenny also worked to popularize the music of composers we hardly knew at the time, such as Carl Nielsen, Aaron Copland and William Schuman. He brought music closer to children of all ages with his TV series Young People’s Concerts. Thanks to him, it became popular to foster young musicians across the world. In this context, his cooperation with the Orchestra of the Schleswig-Holstein Music Festival was something of a highpoint. He also gave the Norton Lectures at Harvard University, where he transferred to music Chomsky’s linguistic theory of a universal grammar. I recall that in order to prepare for these lectures, he had traveled to the finca with two oversized library suitcases filled with scientific literature.

I remember one night on Gran Canaria, as we were talking about Viennese waltzes, Lenny suddenly jumped up, went over to the piano and proceeded to give an hours-long presentation on the Viennese waltz. He covered everything from the minuet to all the latest creations in a performance that was in equal parts musicologically serious and brimming with vitality. Another time, he performed a one-man version of Strauss’ Rosenkavalier by playing the orchestral accompaniment on the piano and singing all vocal parts himself. He hardly got one note right, but it was still one of the most beautiful Rosenkavaliers I’ve ever experienced.

Leonard Bernstein could wax poetic about the history of political songwriting just as much as about the emergence of the blues. He was as well-versed in German poetry as he was in English and American poetry. He was one of the most educated people I’ve ever known. Talking to him about art, history and philosophy was never superficial, and that light Anglo-Saxon touch of his was always a true pleasure.

As he would have said himself, he was an “all-American boy.” He was a person who could eat a hot dog or a hamburger with the same enjoyment he brought to dining at a Michelin-starred restaurant. He was a person who wore jeans during the day and could sit together that evening with leading world figures and express himself in six different languages. He was also always “boyish.” For example, towards the end of the Kiel Regatta, we went sailing with friends on the Baltic Sea, which was still quite cold at the time. At one point, Lenny suddenly got up and took a headfirst dive into the water. We were all horrified. Nobody had warned him that the Baltic was not nearly as warm as the South Pacific. When it looked like he wouldn’t resurface any time soon, we looked for him frantically, tore off our clothes and prepared to jump in. But then he appeared, where we had least expected to find him, smiling from ear to ear. Lenny had swum underneath the hull – and resurfaced on the other side of the yacht, laughing!

Lenny loved the world, he loved people. And he let them know how much he loved them. When Helmut Schmidt, still German chancellor at the time, invited Bernstein to Bonn, he came to me first to ask if there was something he could do that would make Lenny particularly happy. I made a suggestion and Schmidt followed my advice, which was to give him a proper send-off in the form of a small military honor guard. The soldiers couldn’t believe their eyes when Bernstein kissed the chancellor several times on the mouth and simply wouldn’t let him go! Later on, while he was still at the finca just prior to his departure for an audience with Pope Paul VI, Lenny received a warning from Vladimir Nabokov that turned out to be completely justified. It read: “Remember – the ring, not the lips.”

Although he never took sides in party politics, he was nevertheless very politically active. He invited the Black Panthers to engage in discussion and debate, but also to show the world how important it is to find social consensus. On the eve of the second inauguration of President Richard Nixon, he played Haydn’s Messe in tempore belli (Mass in Time of War) with the New York Philharmonic.

He was always an ambassador for peace. He used music to overcome borders and focus on that which unites us and binds us together. The night the Berlin Wall came down, I called him on the phone, as it was immediately clear to me that he was the only one who could conduct “Ode to Joy” in Berlin: “Lenny, the Wall has come down!” He didn’t under­stand me at first, thinking only that something had happened to my house. Then came the idea to present Beethoven’s 9th Symphony at Christmas 1989 in Berlin with the Bavarian Radio Symphony Orchestra, with musicians from the four Allied powers and with other musicians from Israel and the GDR. Bernstein was deeply moved.

An American Jew conducting the 9th Symphony and the finale “Freude schöner Götterfunken” (Joy, beautiful spark of Divinity) or, as he had them sing, “Freiheit, schöner Götterfunken” (Freedom, beautiful spark of Divinity). This was the symbol of peace and human unity emanating from Berlin to the rest of the world. We Germans will always be grateful to Leonard Bernstein for this tremendous gift.

Many musicians, including Isaac Stern, Vladimir Horowitz and Arthur Rubinstein, understandably did not want to perform in Germany after World War II and the atrocities of National Socialism. Bernstein, on the other hand, came to Germany as early as 1948, albeit with some trepidation. In Landsberg am Lech, at a concert with Holocaust survivors, he cried tears of sorrow and tears of relief for liberation and new life.

The thing that had given him the strength to come to Germany was what he called “holy German art” – he was the only person who could have formulated it this way. This art is what brought him here to talk to Germans and introduce them to his ideals. He was convinced that democracy can only be achieved when every individual has access to culture, that is, when art has made its way into the lives of each one of us, rather than being the play thing of privileged individuals only.

With his music and his art, Leonard Bernstein made his way into the lives of each and every one us. His songs are understood by all, perhaps for the first time since Mozart and Beethoven. Shepherds in the mountains whistle his melodies just as much as software engineers in Silicon Valley. It doesn’t matter whether it’s “Maria,” “America” or “The Age of Anxiety,” his symphony for piano that belongs in the repertoire of all large orchestras today; his music is a gift to the whole world. It connects people as friends. America can justifiably be very proud of one of its greatest sons.

Justus Frantz
is the key co-initiator of the Schleswig-Holstein Music Festival (SHMF). He was also its artistic director until 1994. Starting in 1986, leading international musicians have gathered every year in this northern German state to perform in palaces, stately homes, barns, stables, churches, shipyards and old industrial halls in an attempt to bring classical music to the widest audience possible. Leonard Bernstein was also one of the festival’s founding members. In 1987, he initiated an orchestra academy that brings together 100 young and talented musicians. 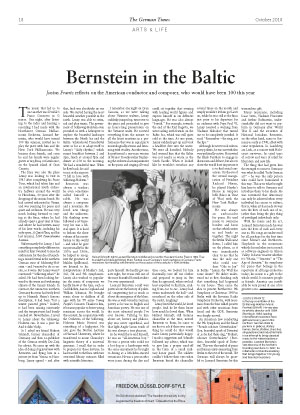