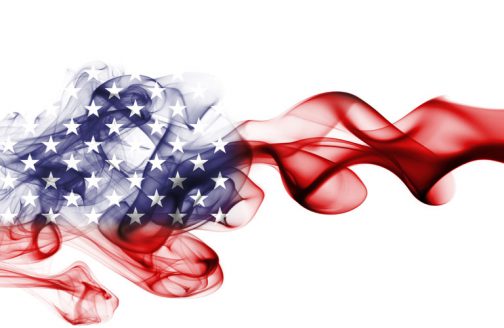 The German-American friendship has sunk so low that Germans now have more trust in China than in the United States. A recent survey commissioned by the Atlantik-Brücke and conducted by the polling firm Civey found that 85 percent of respondents rate relations between the two countries as poor to very poor.

But Germans are airing their resentment not only in anonymous polls. A number of leading intellectuals, writers, journalists and politicians are also making no secret of their anti-American feelings. Some of them are even publicly declaring their general avoidance of traveling to the US. Indeed, it would appear that a trip to the US is no longer considered an essential life experience for Germans.

A growing number of German authors have recently rejected invitations to speak publicly in the US, for fear of appearing to condone what’s happening “in that fascist country.” Yet they have no qualms about traveling to Egypt, China or Russia for professional engagements. TTIP, the ultimately failed free trade agreement, brought German intellectuals to the barricades, claiming that the US intended to shove its fast-food culture down their throats. A short time ago on Facebook, the politician Oskar Lafontaine dubbed the US “the most rogue nation on earth” that “lies shamelessly to provoke wars.” The country “revealed its moral decay decades ago when it cleared the jungle in Vietnam with Agent Orange.”

Anti-American reflexes also have little to do with the myriad of concrete US foreign policy transgressions that one might go so far as to call crimes. In fact, Germans look down on the US to a much greater degree for its embodiment of such things as capitalism, consumerism, bad taste,

materialism and superficiality. Prejudice is never about facts, and always about feelings. Most Germans who judge do so about countries they have either never seen or have visited maybe once or twice. What we have here is a classic case of prejudice.

Germans’ prejudices with regard to America have both a cultural and a psychological dimension. They see the US as the land of evil capitalists, of fatties and dummies, of the rude and the arrogant, of narcissists who care about nothing in the world except themselves, of women who chase after countless cosmetic surgeries, and of men who, like the character of Scrooge McDuck (an American invention), are interested only in money instead of art and moral values (as we Germans are). They see the US as the land of popcorn children and moronic Trump voters in the Midwest, where, in fact, half of the citizens did not vote for him.

Germany’s long-felt inferiority complex – being the loser of the war and then a mere junior partner after that war – is offset by clinging to “higher values,” exhibiting allegedly higher moral integrity, inhabiting a higher cultural and psychological plane and embracing a better form of capitalism, namely Rhine Capitalism. This aversion also derives from the closeness of the relationship between the two countries.

Indeed, Germans are closer in culture and customs to Americans than to citizens of China or India. Yet Germans are reserved in their criticism of these “exotic” countries: When have we ever heard substantial German criticism of the over 5,000 state executions that Amnesty International says take place in China every year?

The US is like an unloved older half-brother who simultaneously does everything better and worse than his younger German sibling. Germany has long been fixated on the American way of life, and has copied it as much as it can. But there remains a deep resentment of the US as a poster child and symbol of unbridled modernism, alienation, rootlessness and acceleration.

How deeply anchored and socially acceptable this unsophisticated anti-American resentment has become is evidenced by the success of the now-disgraced Der Spiegel journalist, Claas Relotius, who enjoyed particular acclaim for his invented reporting on exceedingly unlikeable Americans. It went over well.

Intellectuals in Germany have considerably less to say about the reasons for America’s success, which is indeed not solely grounded in exploitation and imperialism. Despite all its shortcomings, the unbelievably inspiring degree of ethnic and cultural integration enjoyed by this vastly heterogeneous country, the high level of personal discipline exhibited by countless workers in the US as well as the willingness of many Americans to embrace sacrifice and risk are seldom mentioned.

Amid all the justified criticism of the materialism of US citizens, their idealistic and romantic sides are rarely appreciated. When President George W. Bush came off more as unworldly and naïve than as a classic villain when he coined the term “axis of evil,” the formulation contained traces of the values-driven idea that the US was capable of exercising a “positive” influence on the world and that Americans do not wage senseless wars primarily for “oil.”

This idea of a swan song for “America” has many fans in Germany. Unfortunately, however, no one ever thinks about what would happen if the US were to fall. Will capitalism perish if the US continues to decline? Hardly. And very little effort is being made to envisage what the alternative to the Western capitalist way of life as embodied by the US would actually look like.

Critics of America love to churn out their barbs on Apple laptops with Rihanna playing in the background. Honest and consistent criticism of capitalism and globalization would look a whole lot different than that; it also just might send us back to the dark days of nationalism.

Today, the most interesting approaches to imagining a better life are coming from people who resist focusing on unsophisticated resentments of the US and instead work at containing the anti-social excesses of capitalism and reckless gambling with the world’s ecological balance. Many of these people live in the US.

Tanja Dückers
is an author who lives and works in Berlin. 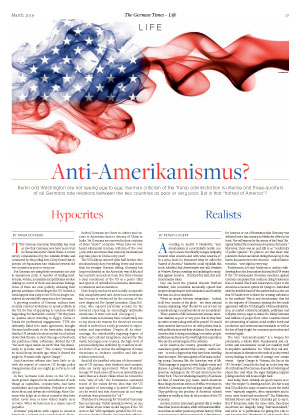