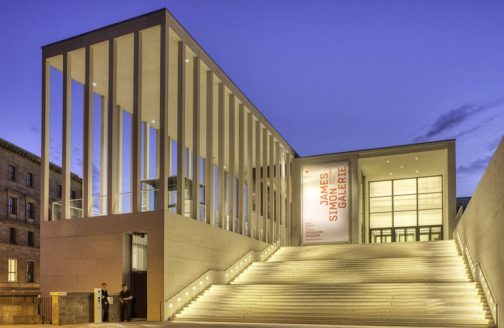 It is the cornerstone of Berlin’s Museum Island. But what may sound like a dotting of the “i” in “island” is in reality an imposing 10,900-square-meter edifice that, after 180 years, has now brought the final touches to a unique architectural ensemble in the center of the city. The James Simon Gallery – the new entrance building for Museum Island – is the sixth and final element in the ensemble, complementing the Altes Museum, Neues Museum, Bode Museum, Pergamon Museum and the Alte Nationalgalerie.

The construction, which took place on the area’s only remaining soil, is intended to serve as a central connecting point for visitors, of which there were 2.5 million in 2018. The new building houses ticket offices, cloakrooms, toilets, a shop, restaurant, lecture hall and spaces for special exhibitions and events.

The James Simon Gallery, designed by British architect Sir David Chipperfield, is also a signal for the new 21st-century era: a resolutely modern architecture which, with its slender white pillars as its defining feature, seeks to build a bridge to the surrounding buildings that likewise feature columns, pillars and pilaster strips as architectural forms. Nevertheless, for anyone approaching Museum Island from the Kupfergraben canal or Lustgarten, the first perceptions of this bright white building, which achieves its light materiality from concrete mixed with marble dust, will be of a foreign object.

The building’s massiveness and minimalist severity clash strongly with the neighboring Pergamon Museum, and even obscures the Neues Museum. The elevated ground level, appended at a very late stage with two windows aimed at breaking up the sleek surface, drops abruptly to the water surrounding Museum Island. By contrast, the pillars of the colonnade rising up from this level appear like a line of quills, even when set against the towering pillars at the front of the Pergamon Museum. And yet, by referencing the classicist 19th-century colonnade, and by extending these optically into the present, the building manages to blend in.

The James Simon Gallery is the final new building on Museum Island and, as such, was obliged to speak with the clear voice of modernity. No new buildings had been added to the site since the opening of the Pergamon Museum in 1930. Instead, efforts since then had focused on the painstaking repair of war damage. During the GDR era, attempts were made, for better or worse, to conserve something of the remaining structures, with the long-term dream of creating the most beautiful of showcases for Berlin’s vast collection of art and cultural artifacts.

The Island dates back to a decree issued by King Friedrich Wilhelm IV in 1841 that the location be used for the creation of a “sanctuary for art and science.” And thus, a Prussian acropolis with five art temples soon rose up on the ancient trading site, directly alongside the university that had been founded 20 years prior. Today, the acropolis houses Berlin’s archaeological collections, sculptures and 19th-century painting.

Any exuberance over the completion of the ensemble with the opening of the Pergamon Museum in 1930 did not last long. The outbreak of war soon necessitated the shutting down of what had taken over a century to build, each building in its own style. The damage caused in World War II was so great, and its repair so difficult, that it was not until 1989, the year of the fall of the Wall, that the foundation for the restoration of the Neues Museum was finally laid. Up until very recently, the soot-covered three-quarter ruin was a physical witness to the destruction of the wartime bombing.

David Chipperfield was commissioned as the architect for the sensitive restoration of the Neues Museum, and he later went on to win the tender for the construction of the James Simon Gallery. For Chipperfield, whose work at the Neues Museum had focused primarily on reconstruction, this must have served as confirmation that he was now permitted to leave an outwardly visible mark on Museum Island.

The architect himself speaks of working through a “wish list” for the James Simon Gallery that was provided to him by the Prussian Cultural Heritage Foundation. First of all, the building had to fulfill a range of specific functions, with an emphasis on channeling the flow of visitors. To this end, it accommodates the ticket offices, cloakrooms, a shop, and the counter for audio guides. In addition, it is now possible to enter the Pergamon Museum and the Neues Museum from the James Simon Gallery.

This site was also meant to house the entrance to the Archaeological Promenade, an underground passage connecting the Altes Museum, Neues Museum, Pergamon Museum and Bode Museum, but with funds not yet granted, this has yet to become a reality.

On the huge construction site that is Museum Island, commissions are completed only gradually. It is currently the Pergamon’s turn to undergo renovation. In the case of the James Simon Gallery, problems arose during the course of construction, resulting in an inevitable increase in costs. The foundations submerged in water proved extremely complicated to implement, and difficulties were compounded by the shoddy execution of the some of the construction work. The opening in the summer of 2019 finally took place after a seven-year delay, by which point costs had almost doubled to €134 million.

Today, most visitors entering the James Simon Gallery will remain blissfully unaware of the pains of its birth. The only remnant can be found in the furthest corner: a mighty tree trunk – a relic from the time of Karl Friedrich Schinkel, Museum Island’s original master architect – pulled from the ground in the course of construction.

Before visitors can reach this point, they must first climb a staircase to the building (or take the elevator), as most of the building consists of human thoroughfares. A restaurant with a terrace overlooking the Kupfergraben is on the upper floor.

Other facilities include an auditorium for 300 people and a venue for special exhibitions with around 650 square meters of space. In the weeks following the opening, this was host to an exhibition honoring the building’s namesake, James Simon, the art collector, philanthropist and patron of the arts born in 1851.

This recognition was almost sidelined due to plans by the Gipsformerei (Replica Workshop) to stage an exhibition in the space as part of their own anniversary display. Those plans were met with a hail of protest, however, and the Gipsformerei exhibition was postponed until September. And while the name of the great Jewish patron is now also inscribed on the Museum Island wall, it hasn’t always been smooth sailing for the man himself: the bronze plaque dedicated to his legacy was hung only belatedly at the entrance wall.

Born into a wealthy textile dynasty in Berlin, Simon was actively engaged in a number of social causes and worked to promote education. Passionate about art, he also went on to donate extensive and significant collections to Germany’s royal museums.

But James Simon became famous above all as the person who donated the Nefertiti bust to the Berlin museums. As a cofounder of the German Oriental Society (DOG), he financed numerous excavations, including in Amarna, where the bust was salvaged in 1912. Eight years later, he bequeathed the bust to the Berlin museums. James Simon sought to give people access to art, and he gave generously. A liberal supporter of the Weimar Republic, Simon died in 1932 and was buried with full honors at the Jewish cemetery on Schönhauser Allee. The Nazis’ reign of terror would begin just one year later. That Berlin’s museum portal now carries the name of James Simon is a symbol of – and a belated gesture of gratitude for – his great work and impressive life. 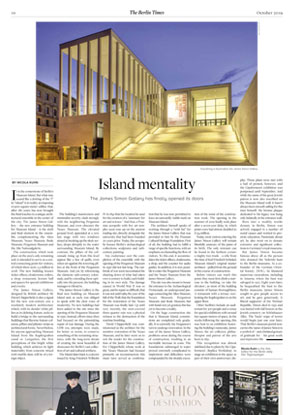