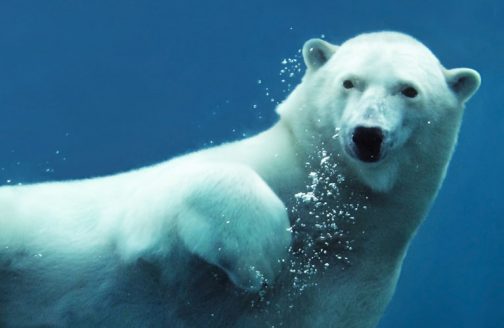 The warming of the Earth’s atmosphere and oceans is wreaking havoc in the Arctic, where the summers used to be short and cold and winters prohibited any type of commerce – and any type of war, for the temperature was unthinkably cold and storms punished anyone bold enough or unlucky enough to be there. It used to be unimaginable that the Arctic would ever thaw, but today’s say that it will be on average three to five degrees Celsius warmer by the middle of the century, no matter whether the world adheres to the Paris climate accord or an even more stringent agreement.

The ice is now melting away – and along with it any prior reluctance to take political action in both the East and the West. Donald Trump’s recent failed attempt to camouflage his geostrategic power game as a “generous” offer to buy Greenland has shined a global spotlight on the Arctic. The question now in diplomatic circles is whether an ecologically destabilized Arctic could become the theater of a new Cold War.

There’s a good argument for this being the case, and it could have fatal repercussions for climate change. For years, the nearly four million people that have lived within the Arctic Circle have conducted a sort of long-distance relationship with the rest of the world. The less than 60,000 Greenlanders, for example, two-thirds of whom are indigenous citizens, have achieved far-reaching domestic autonomy, and even if they live mainly off of annual subsidies from Denmark to the tune of $700 million, plus some income from deep-sea fishing, their ambition to achieve quick and complete independence has remained steadfast.

The Arctic policy of eight littoral countries – Canada, Denmark, Finland, Iceland, Norway, Sweden and Russia and the US – which joined forced in the mid-1990s to form the Arctic Council, is still ostensibly defined by a strong desire for neutrality and cooperation. But behind the scenes, they are sharpening knives. And they’re not the only ones. In the first years of the new millennium, more and more non-neighboring states, including countries that lie thousands of miles south of the Polar Circle – like China, India and Brazil – have pressed for observer status. Although it doesn’t come with any official voting rights or even voice, it will allow them to influence decisions about the use of the Arctic region.

Beyond the 200-mile zone that the Arctic neighbors in Europe, North America and Russia have sovereign rights to use economically, there exist several established multinational agreements. One is the United Nations Convention on the Law of the Sea, which seeks to regulate the handling of usage requests and environmental protection issues. However, there are significant gaps to fill. In distinction from the Antarctic, the political status of large swaths of the Arctic Ocean is unsettled. Russia’s foray at the North Pole more than ten years ago made this fact patently clear for the entire world.

Under international law, Russia’s planting of its flag in the seabed at the North Pole – an event captured on video – is of no significance, but the action’s inherent claim to expand Russia’s continental shelf to include 1.2 million square kilometers of the deep-sea floor beyond the Siberian coast has certainly resonated. Along with the thawing of glaciers and the sea ice cover in the Arctic, the geopolitical contest for the resources of the far north has reached a fever pitch.

Denmark and Canada have also claimed rightful expansions to the continental shelves. At stake is a tremendous amount of oil and gas – experts estimate that one-third of the world’s resources lie under the Arctic Ocean – but also zinc, iron, copper, nickel, diamonds and rare earths, a critical element in the manufacturing of smartphones. Not to forget fish, half of whose catch is ultimately consumed by Europeans. Last but not least among the issues driving tensions in the Arctic are the melting polar trade routes and a slew of military strategic goals.

The Northeast Passage between Europe and Asia – climatologists predict that it will be free of ice all year around by mid-century – could reduce the length of commercial routes by a third. For this reason, China is negotiating with Russia about the use of the Northeast Passage and has begun purchasing land and investing in ports and mines in Greenland.

Under US pressure, Denmark took over the construction of several airfields that the Chinese had wanted to finance and build. At an Arctic Council meeting in Greenland in May, US Secretary of State Mike Pompeo became hot under the collar when he warned China to keep its “aggressive Arctic policy” in check.

Germany, which has held observer status for quite a few years and has even hosted several major conferences on the Arctic, steers a more diplomatic course through these contentious waters, but one would be hard-pressed to describe it as restrained. The Federal Government’s “German Arctic Policy Guidelines” adopted in August explicitly outlines an active role. Its aim is to “seize opportunities” and “assume responsibility.” Multilateralism, openness to dialogue and joint solutions including all participants remain the ideal configuration for Berlin.

This applies above all to Arctic research, in which Germany enjoys a prominent role internationally. Berlin is concerned about the shortage of international agreements and the geostrategic contests between China, Russia and the US, which ultimately could impair German and European interests. Thus, the idea of “seizing economic opportunities” is the order of the day. German marine technology must step up – “new perspectives are opening for German companies.”

It is precisely these perspectives that the Intergovernmental Panel on Climate Change (IPCC) vehemently warns against in its recently published special report on the oceans and the cryosphere – the areas of the Earth covered with ice. Growth-driven economies have been a big factor in accelerating the ecological downward spiral at the polar circle. Perilous feedback effects hold the potential to further destabilize the region. Soot emissions darken the ice, which then absorbs more heat and leads to more melting.

But less ice does not mean greater stability. The disappearance of Arctic ice destroys the livelihood of polar bears, fish and plankton. Food webs are also destroyed much too quickly. Already, the weather machine for all of Europe – i.e. the vast air and ocean circulation in the Arctic – no longer works the way it once did. Extreme weather events are becoming ever more frequent. The ocean pump south of Greenland, “Europe’s heater,” which transports the warm surface water of the Gulf Stream deep into the sea, has already noticeably diminished. The result is that the global conveyor belt of the ocean currents is weakening much faster than expected. The extent of the dangers this brings is not being openly and earnestly discussed – neither in the “German Arctic Policy Guidelines” nor by the great powers.

And, as always, if moneyed interests get into the game and environment policy is marginalized, the security issues will howl the loudest. Military strategies will take center stage. The Russians have recently strengthened their weaponry and troop presence in the north; they are conducting more frequents military exercises; and their ports are being refurbished or expanded. Their North American opponents will not let these measures go answered.

In the short term, of course, investment and military adventurism remain extremely expensive and risky for all countries. But as for the long term, let there be no doubt: there’s a strong headwind beating back any sensible, environment- oriented policy for the Arctic.

Joachim Müller-Jung
is director of the science department at the Frankfurter Allgemeine Zeitung. 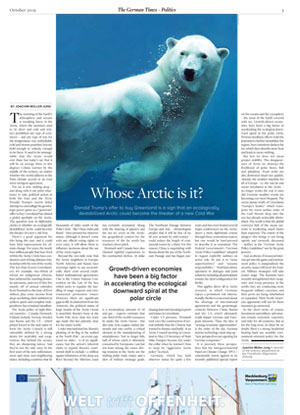