We were having breakfast at Berlin’s Hotel Adlon when I said to Richard S. Lugar, “I need your help, Senator!”

That was back in 2003. At the time, the friendship between Germany and the United States had chilled considerably after the federal government had signaled its unwillingness to participate in the war against Iraq. I had come up with an idea as to how we could sustain the dialogue across the Atlantic in spite of the chill, and I presented my idea to Lugar, who was chairman of the Foreign Affairs Committee of the US Senate at the time. I wanted to create a journalistic bridge between Germany and the United States.

“What you can do is ensure that our newspaper is distributed to key decision-makers and multipliers in Washington, despite the stringent 9/11 security measures.”

I had met Senator Lugar on many occasions and I was sure that he would support our project.

And he did. On Oct. 3, 2004, I had the opportunity to present him the first copy of our newspaper – The Atlantic Times – at the German Embassy in Washington. From that day on, the newspaper was a link between Berlin and Washington, between Germany and the United States. It reached all the major multipliers in the US and was on the desks of US senators, members of the House of Representatives, business leaders and creative minds for many years. It also contributed to the diversity of opinion and open political discourse in the context of 127 German-American city partnerships.

The current edition of our newspaper has been given the name The German Times. Even with this unified worldwide title, the paper remains a trans-Atlantic newspaper committed to keeping an eye on the key issues of global politics. We very much hope that our new title contributes to the creation of an even stronger German-American friendship and a deeper understanding between the two allies and friends. 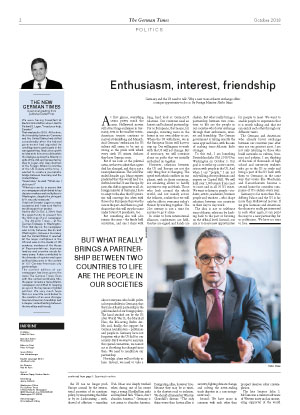