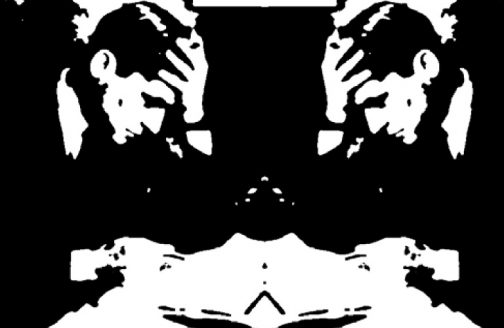 It’s the political novel of the day, a warning signal, a reck­oning with all forms of totalitarianism, a riveting literary dystopia. As a matter of fact, Darkness at Noon, Arthur Koestler’s international classic, is undergoing its third finest hour in Germany, that is, in German.

Born in Budapest, raised in Vienna and an artisan of German prose, Koestler toiled on his book while exiled in Paris between summer 1938 and spring 1940, before being forced to flee the French capital ahead of the Nazi occupation. The only German copy was lost as he fled. 75 years later, however, the German literary scholar Matthias Weßel discovered the manuscript in the archive of a publishing house in Zurich.

Daphne Hardy, Koestler’s lover at the time, penned the English translation of Darkness at Noon and sent it off to London. In the absence of the original manuscript, Hardy’s translation was considered the Urtext and served as the source for translations into 30 languages, and even back into German. As Koestler’s biographer Michael Scammell would note, such a case stands alone in the history of modern literature.

Darkness at Noon uses powerful and disturbing imagery to recount the life and death of the revolutionary leader Nicolai Rubashov, who is arrested and soon thereafter imprisoned. In captivity he is interrogated to excruciating effect by two examining magistrates, Ivanov, an erstwhile friend and fellow traveler, and Gletkin, a hostile and ruthless inquisitor. The two officials use all means of manipulation to bring Rubashov to confess to crimes he did not commit.

The book, as Scammell calls it, is an “intellectual political thriller,” which simultaneously became a political statement, a commercial success and a novel celebrated by critics. In 1998, the Modern Library selected the book as the eighth most important work of the twentieth century.

Up until his arrest and imprisonment in the Spanish Civil War in 1937, Koestler himself was a communist. He often asked himself how the NKVD was successful in persuading such prominent party leaders like Nikolai Bukharin, Grigory Zinoviev and Karl Radek to confess to crimes they never committed, thus signing their own death sentences.

The book does not reveal the country in which it is set. At several points in the novel there are indications it may be Nazi Germany, or perhaps communist Soviet Union. Scammel writes that early on, more astute critics called attention to the generally overlooked fact that Koestler was one of the first authors to notice the growing similarities between the Soviet and Nazi regimes. Koestler’s message, in general, can be read less as anti-Soviet than anti-totalitarian.

The book became a bestseller. In France alone, 70,000 copies were sold in its first month of publication in 1946. Parisians queued up before the publishing house to secure a copy, which could then be resold for up to eight times the retail price. By mid-year, the novel had sold 300,000 copies, and after two years, two million.

With the escalation of the Cold War, however, Koestler’s anti-totalitarian – indeed universal – message passed nearly unnoticed. As in the time of Franz Kafka, whose works were published between 1908 and 1924, segments of the literary world and wide circles of political intellectuals fixated on anti-communist interpretations of literature. Darkness at Noon was broadly perceived as a document of the Cold War.

The first German translation appeared in 1948. Within Germany, Koestler was understood to be an English author. His works were all translated from the English. Scammell notes that German-speaking readers would have regarded the novel as “testimony of a foreign culture.” This, perhaps, encouraged many of them to overlook the passages on totalitarian Germany and to exclusively interpret the novel as criticism of the Soviet state.

The rediscovery of the original manuscript can thus also be celebrated as an occasion to better understand the book’s political dimension. Daphne Hardy, the translator of the Urtext, had never before translated a book into English. She was just 21 years old and was forced to work under tremendous time pressure. She was familiar with neither the practices of the Soviet and National Socialist secret police nor the mechanisms of totalitarian states, thus she replaced Bolshevik terminology with British legal concepts and terms, which lent the system a milder and more civilized manifestation.

Several critical “mistakes” can now be accounted for. In the first back-translation, for example, in one of the interrogation scenes, Rubashov scoffs that “our leadership [is] more grotesque than that jumping jack’s with the little mustache” – a direct reference to Hitler. However, the phrase in Daphne Hardy’s original translation reads: “our leader-worship [is] more Byzantine than that of the reactionary dictatorships.” In this more abstract formulation, the commonality Koestler so deftly recognized between the Soviet Union and Nazi Germany remains more-or-less unpronounced.

Matthias Weßel, who found the manuscript and was able to research Koestler in the German Historical Institute Moscow as well as in the Russian State Military Archive, has vowed to deliver a complete and systematic evaluation of the two versions.

In the afterword to the new revised German edition published in 1960, Koestler wrote: “I translated Darkness at Noon back into German myself, and this distressing feeling lingers within me that the spontaneity of the original has been lost.”

Germans readers are now the first to savor this spontaneity in full splendor and to draw whatever political or historical conclusions they may. In fact, it would be rewarding, and not just from a literary standpoint, to contemplate new translations into other languages based on the rediscovered manuscript – ideally into all 30 employed previously. 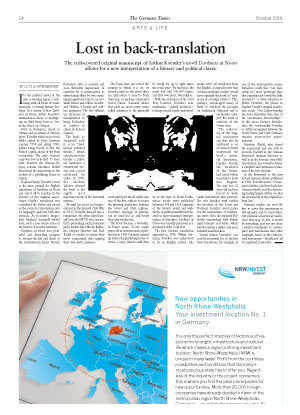