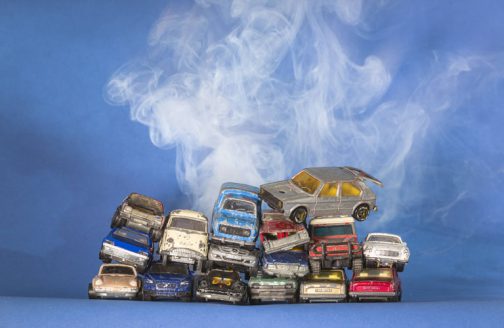 German CEOs tend to get nervous when confronted with legal problems in the United States. To be sure, class action lawsuits are often associated with major financial costs. This is exactly what Volkswagen found out when the diesel scandal broke. While there is much criticism of class action suits, primarily regarding the large sums involved in litigation, there have been growing calls in Germany for more consumer rights in the face of powerful companies.

The unique feature of a US class action is that individuals can join such lawsuits without first having to prove the extent of damages suffered. This rule applied to the half-million people in the US who bought a Volkswagen car with software rigged to conceal actual exhaust levels. It was a very expensive misstep for Volkswagen; the Wolfsburg-based automaker estimated the cost at roughly $20,000 per customer for the repurchase of vehicles and other compensation.

In 2016, with the addition of legal fines, the sum came to more than $20 billion. The auto supplier, Bosch, paid the owners of diesel cars more than $300 million following a settlement. Deutsche Bank was also subjected to a class action suit and paid a total of $170 million to institutional and private investors. In that case, traders had manipulated the LIBOR interest rate to which more than $400 billion in worldwide financial products are tied.

One thing is for sure: None of the companies charged in these cases were innocent lambs, and all of them were called to atone for their misconduct.

In light of this, any accusations that these costly lawsuits are a politically motivated campaign waged against German companies and designed to damage rivals of US companies seem absurd. American companies themselves are subject to class action lawsuits. For example, Citigroup, the US banking and financial services corporation, was involved in Deutsche Bank’s interest rate manipulation and it, too, had to pay millions to the plaintiffs.

The hefty damage claims are also a product of legal differences. In Germany, compensation serves to amend the damages suffered by the customer, but the state also tries to ensure the safety and fundamental quality of products by means of laws and controls. In the US, by contrast, the government exercises far less regulatory intervention in manufacturing. Instead, potentially high punitive damages are supposed to keep companies in check and encourage them to produce trustworthy goods.

The criticism coming out of Germany is aimed above all at the large sums involved in some situations, such as the Volkswagen case, for example. VW sold automobiles using rigged diesel technology to a half a million customers in the US; in Europe, however, it sold such vehicles to eight and a half million people, that is, to 17 times as many customers. Following the class action logic, if VW were to agree to a settlement with customers in Europe based on the US model, it would cost the corporation up to 17 times more, i.e. over €150 billion. This would presumably lead to the largest European automobile company – which has more than a half million employees – having to declare bankruptcy. Can this be the goal of lawsuits, even when the company does not contest its misconduct?

“If the US were everywhere, VW would be broke,” wrote Heribert Prantl in the Süddeutsche Zeitung after the settlement. “The high sums and the pressure generated by the US system are inaccurate representations of the actual quality of this legal protection.”

As Volker Votsmeier advised in Handelsblatt, the US legal system provides plaintiffs and their lawyers with “instruments of torture” that Germany should most definitely not import. “Companies in the US are threatened with high punitive damages that are determined by lay juries and are hardly calculable.” But these torture instruments are not the only thing putting pressure on companies. “Even when the underlying claims are doubtful,” argues European Parliament member Andreas Schwab (CDU), “most companies are forced to engage in out-of-court settlements to avoid losing their reputation or having to pay tremendous legal costs.”

And then there are the claimant lawyers who actively seek out clients. To some individuals, these lawyers enter the scene as white knights, fighting for those who have been disenfranchised and merely helping citizens assert their rights against powerful corporations. For example, Michael Hausfeld is one of the stars of the scene, and he certainly fights for noble causes. Hausfeld represented native peoples in Alaska after the devastating Exxon Valdez disaster of 1989. He also secured $1.2 billion in compensation from Swiss banks and financial institutions after proving they had siphoned money from Jewish clients in World War II.

Still, critics disapprove of these lawyers’ business model. In contrast to their colleagues in Germany, US class action lawyers do not receive a fixed fee; instead, if they bring the case to a successful close, they can cash in big time – sometimes receiving up to 30 percent of total compensation paid. In the VW case, that would have been billions.

The approach taken by some US law firms was on display recently when news broke of a presumptive auto cartel between large German manufacturers. In 2017, four days after Der Spiegel had reported on the unsettled accusations, a US law firm submitted a 70-page complaint to the district court in New Jersey.

Klaus Müller, head of the Federation of German Consumer Organizations (VZBZ), refers to such moves as “commercially driven lawsuits.” Heribert Prantl, a former judge and state prosecutor in Bavaria, seconds that motion: “An entire industry sprang up around the class action lawsuit. It is set up in such a way that lawyers do everything they can to bring together as many plaintiffs as possible and then submit the highest claims possible. As their fee is based on the actual sum of the damages paid, US lawyers tend to earn far more on class action suits than their clients receive.”

Member of European Parliament Schwab criticizes what he sees as false incentives: “Lawyers on the other side of the Atlantic advertise for additional class action plaintiffs via newspapers and TV ads. After all, the more injured parties that join the lawsuit, the higher their combined threat. And, owing to the system of success-based compensation, the majority of compensation payments often lands in the hands of the lawyers. On average, each individual claimant receives only $32.”

Politicians like Schwab warn against importing this system to Europe or Germany. And yet, particularly in the case of Volkswagen, it is easy to see that while companies are hit perhaps too hard in the US, the German system fails to give consumers any better opportunities. Can they hope for some sort of compensation for VW’s diesel manipulation? It remains entirely unclear. The case has now prompted even louder calls to better protect consumers.

A new declaratory model action has now emerged in Germany; a Musterfeststellungsklage seeks to strengthen the rights of consumers in cases such as the diesel scandal without adopting the excesses of the US class action suit. For example, until now, a German VW customer would have been able to do little more than hope that a judge would classify the manipulated exhaust values as a serious deficiency; he or she would then have had to make his or her way alone through the legal system, without co-plaintiffs. Also, until recently, he or she would have had to file a lawsuit at the district court, thus facing immediate costs of €3,000 or more.

The Musterfeststellungsklage now lowers the threshold. For example, in the VW case, plaintiffs can put their names on a list without incurring any costs. Germany’s Federal Office of Justice is responsible for collecting the applications. The idea is to have a central authority gather evidence on questions of compensation in similar cases. The risk of litigation then lies with the consumer advocates. By early February, more than 400,000 auto buyers had already entered their names on the list. “The high number of registrations proves that the Musterfeststellungsklage is an important instrument for many of those affected,” notes consumer advocate Klaus Müller.

Exactly when the trial against VW will get under way is uncertain. Once it does, it will become clear whether the Musterfeststellungsklage is a suitable instrument for giving German consumers more rights without becoming a carbon copy of US class action law suits. 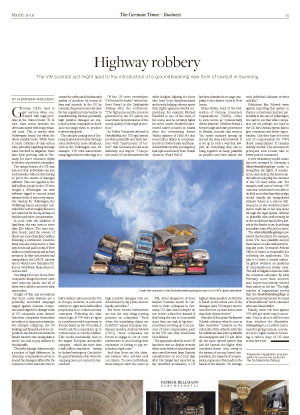