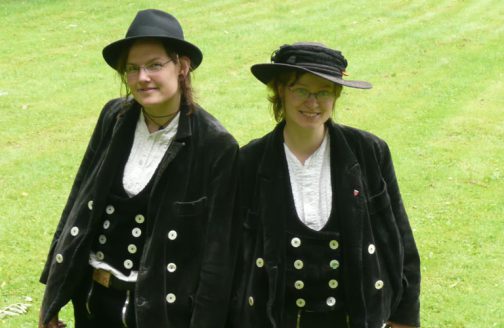 Johanna Röh is one of the very few women ever to take up the old German tradition of the Wanderjahre, a custom that involves spending several years traveling the world as a craftsperson Johanna Röh had a queasy feeling. Just moments before, her friends and relatives had carried her with pomp and circumstance past the sign marking the city limits of her home town of Kassel. Minutes later, she was walking away from them with only a small pack on her back and a hiking stick in hand. The few items she had with her included a change of clothes, a toothbrush and a set of tools wrapped in the 80-by-80-centimeter cloth she had bundled on her back. No more than that. Not even money or a mobile phone.

Every step took her further away from the hometown where she’d just completed her three-year apprenticeship as a woodworker’s assistant. And as she walked away and her parents and friends called out their final best wishes for her trip, she was not allowed to turn and look back. For at least three years and a day, she was not to return. She wasn’t allowed to. Johanna Röh had just set out on her Wanderjahre, her journeyman years or, in her case, her journeywoman years. She was even wearing the Kluft, the traditional outfit consisting of black bellbottom pants, a white, collarless shirt, a black vest with eight mother-of-pearl buttons, a black hat and a jacket.

“I was in the second year of my apprenticeship when I first found out that woodworkers could do the Wanderjahre too,” says the now 31-year-old Röh. “The cliche is that only carpenters can become journeymen.” She hadn’t originally wanted to become a craftswoman; she had more or less slipped into a woodworking apprenticeship, completing her Abitur (high school degree) along the way. But then she found out that woodworking apprentices could also go auf die Walz, as the years on the road are also often called. “At that point, I knew it was something I had to do.”

Single, no debt, no kids and under the age of 30 – these are the prerequisites for being permitted to go auf die Walz. “The rules are firmly in place because the Walz is not designed to be some sort of escape from responsibility at home,” explains the woman from Alfhausen, a town just outside of Osnabruck in Lower Saxony. It wasn’t long before Röh also fulfilled the final requirement, which was passing her apprenticeship exam.

The young craftswoman spent one year preparing for the adventure, talking to journeymen who had already completed their Wanderschaft. Röh didn’t join any of the associations known as the Schacht, however. “Only two of those associations are open to women,” she notes. “So I set out as a Freireisende, a free traveler, just like the journeywoman who mentored me in all things relating to the Wanderschaft.”

The then 21-year-old spent her first week on the road on foot with only a map to navigate. Her first goal was to make her way 50 kilometers outside of Kassel, an area she was not permitted to re-enter until the last day of her journey. Her mentor accompanied her for the first two months and introduced her to all the official customs, rituals and behavioral code of the Wanderschaft. “

Some of the customs have been passed down since the Middle Ages,” says Röh. But she’s careful not to reveal too much about them. Indeed, the customs are also a kind of code, a legitimation that a person is a serious journeyman. For example, every journeyman is obliged to introduce themselves to the mayor of the town they want to work in. “In this case, the ritual functions as a kind of passport.”

Röh took up her first position as an apprentice in a town near Regensburg in Bavaria. She walked part of the way there and sometimes hitchhiking or traveling by bus or train, which is only permitted if you’re taken along for free. In this case, she was forced to recognize that there are definitely regional differences within Germany: “People in Hamburg are very open to it, but it just doesn’t work in Munich.”

The young apprentice traveled almost exclusively in Germany in the first year of her Wanderschaft. “Your encounters with other people are very important, especially in the early days,” she admits. “There really is a big difference to what you’re used to.” For this reason, she took part in several gatherings and regular meetings with other journeymen in this phase.

After one year in Germany, she set off for Mexico. “I’ve always been interested in that country and its culture,” explains Röh, when asked why she chose that particular country. She didn’t actually work in Mexico, however; she limited herself to visiting woodshops and the like. “It was totally amazing to see how much people can achieve there with relatively little means.”

The young woman with the ponytail and dark-rimmed glasses then crossed the border into the United States at El Paso. She was not permitted to work there, however: “It’s really hard to get a work permit for the US,” she explains, “especially when you’re doing a Wanderschaft.” Still, many businesses there were familiar with the journeyman tradition. As she made her way along the west coast up to Vancouver in Canada, she stuck to visiting woodshops, where she learned quite a lot. “That’s the whole point of the Wanderschaft, to get to know the techniques used by others and broaden your own horizons.” By the way, Röh’s main means of transportation in the US was a bicycle.

She’d already obtained a work visa for Canada, having organized her first position at a woodshop in advance. “But after just two weeks, I was on the road again.” Journeymen tend not to stay long in one place, so as to avoid putting down roots. Among other things, Röh attended a course at a “school of fine woodworking,” which she found very exciting. “It was so different from what we know in Germany. The training was less a preparation for working as a carpenter and more a place to hone my skills in artistic craftsmanship.”

In total, Röh spent more than one year on the North American continent. She then chose Christchurch in New Zealand as her next stop. It was 2011, just after that country had suffered a devastating earthquake that destroyed many homes. “At the time, people were still in the process of rebuilding everything, and restoring old furniture.”

Up until then, Röh hadn’t spent much time restoring furniture. “In Germany, you have to actually study to be permitted to do that.” The business where she found work did both: furniture making and restoration. “It was my big opportunity. I didn’t even have to explain much when I arrived. As soon as they saw my outfit, my soon-to-be bosses knew that I was from Germany, that I was a woodworking apprentice and that I was auf der Walz.”

Röh notes that she benefited on many occasions from the good reputation of German apprentice culture and the cliche of punctual and conscientious work habits. “Businesses all over the world, especially those that know a thing or two about the culture of craftsmanship and journeymen, were familiar with what I was doing.”

After six months in New Zealand, she left directly for Japan, where she spent a full year. Journeymen aren’t usually supposed to stay longer than three months in one place, so as not to fall into a routine. Johanna Röh broke with this tradition only once, in Osaka, where she met her Master Sensei. And she did so for a simple reason: “In Japan, time works differently. If I had moved on after only three months, I wouldn’t have learned much.”

Röh shines when she talks about Japan. The country and its people profoundly shaped her approach to woodworking and her understanding of her craft. For example, her time there had a major impact on her definition of what constitutes good craftsman tools: “A tool doesn’t start out as good or bad,” she explains. “Every person is responsible for making each tool as good as it can be.” And that’s exactly what Röh began to do in Osaka. For weeks, the only thing she did was sharpen and set hand planes.

A monotonous and boring task? “Not at all,” says the now master woodworker. “It was a gift. It gave me humility and respect for the craft. If I had just started making something right away, I would not have had the benefit of practice.”

In spite of her inspirational experiences in Japan, Röh already knew she was going to return to Germany after a year. “I wanted to attend the Meisterschule, the master school,” she says.

After arriving back in Frankfurt, Röh worked one last time on furniture and buildings at a woodshop before returning to Kassel. Four years had passed since she had left, and on the final leg of her journey, she was accompanied by two fellow journeywomen and her youngest sister. With a big smile, the young woman was carried past the sign marking the city limits, this time in the opposite direction.

In 2013, Röh arrived back in Kassel with no money, just like the day she had set out on her adventure. She observed the traditional arrival ceremony at the city sign with only the three women accompanying her. As soon as she made it home, however, there was a big reception to mark her arrival. There was also a surprise guest she’d not expected to see – Master Sensei had traveled all the way from Japan to welcome her home.

Today, as she leafs through her Wanderbuch, her “book of wandering,” Johanna Röh recalls how odd it was to no longer wear the Kluft. “It took a while to get used to that,” she says. The outfit used to function as evidence of her journeywoman status; today, however, that role is played by her book of wandering. It’s not a book that the traveler herself wrote in; it contains entries made by people she met along the way. In this sense, the book becomes a special collection of memories: sometimes in the form of images, sometimes long texts and sometimes testimonies written in different languages.

Both her mother and her friends supported Johanna Röh in her decision to set out on a Wanderschaft – even though they knew it was going to be hard to stay in contact over the years. “My mother made an extra effort to learn how to use email so we could stay in touch.”

Unfortunately, some of her friendships didn’t survive her time away, and her relationship with her boyfriend also came to an end. “When you’re on the road, you’re extremely busy with other things,” Röh explains. “You’re on a completely different wavelength.”

It was only after her time as a journeywoman that she met her husband. They got married a year ago in the workshop where Röh, now a master woodworker, pursues her craft. Chalk drawings on the wall testify to that happy day. The workshop is also the place where Röh is now training the next generation of young woodworkers. And who knows, perhaps one of her own apprentices will complete their three-year training and choose to continue the tradition by setting off on a Wanderschaft of their own.

Nina Kallmeier
is a business editor at the Neue Osnabrücker Zeitung. 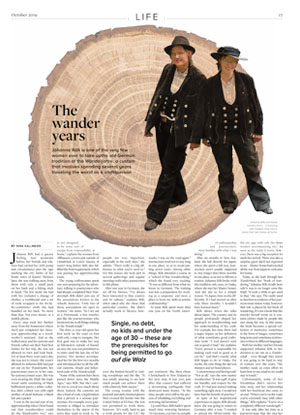