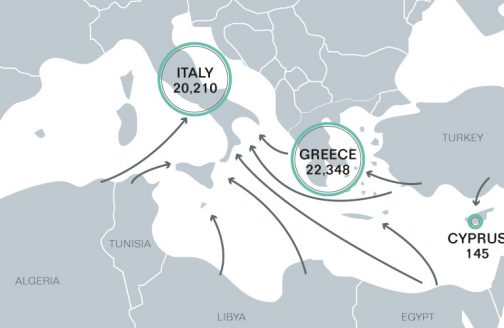 Karl Hilsenbek is worried. “No one knows what will happen tomorrow, or where migrant numbers go from here,” says the mayor of Ellwangen, a flourishing town in Germany’s prosperous southwestern state of Baden-Württemberg. Unemployment there is under 2 percent. Large billboards advertise companies searching for new trainees. Little cause for worry, one would think.

But on the outskirts of town, on the grounds of an old army barracks, lies a large refugee camp known to locals as the Landeserstaufnahmeeinrichtung (LEA, or Initial Reception Facility). At times, conditions there have seriously affected the “subjective sense of security” among Ellwangen residents, Hilsenbek says. “At the moment everything’s quiet,” says the 60-year-old marathon runner, “but that could all change tomorrow.”

Hilsenbek speaks from experience. By September 2015, within months of the LEA’s establishment, 4,500 people were living there. The facility was designed to accommodate 1,000 at most. The pedestrian shopping area in Ellwangen’s old quarter was soon full of migrants. To keep a lid on the public’s growing anger, authorities decided to switch off the town’s free public WiFi service.

That quieted the situation until early 2016, when the alleged rape of a German-Russian girl in faraway Berlin caused tempers to flare again. In protests against the supposed assault by “southern-looking migrants,” hundreds of ethnic German-Russians assembled at the gates of the LEA, among them operatives of the extreme right-wing National Democratic Party of Germany (NPD). Demonstrators chanted “Protect our children!” and “Merkel must go!”

There would be more. In April 2018, dozens of inhabitants of the LEA freed a young Togolese man from police detention, thereby preventing his deportation. A storm of protest erupted and spread far beyond Ellwangen. Across Germany, people wondered whether to expect more cases of resistance in refugee centers. “A slap in the face of the law-abiding populace” is how German Interior Minister Horst Seehofer characterized the incident, which even made it to the pages of The Washington Post.

Regional lawmakers of the far-right Alternative for Germany (AfD) party, which took 15 per­cent of the vote in Baden-Württemberg in 2016, also lamented a loss of state control. Incidents like the ones in Ellwangen are grist to the mill for the party, which, ever since hundreds of thousands of Iraqis and Syrians fled to Germany in 2015, has tirelessly warned of the erosion of law and order. When a Cuban-German died following a dispute with a Syrian and an Iraqi in Chemnitz in August, thousands of AfD supporters joined members of the far-right Pegida movement in weeks of protests in the Saxon city. Thousands also marched through the streets of Köthen in Saxony-Anhalt in September, after a 22-year-old man died there from a heart attack following a street fight. Two Afghans were arrested.

The AfD is also polling about 14 percent in Bavaria, where voters elect a new state legislature in October. After a decades-long monopoly in government, the conservative Christian Social Union (CSU) now faces the prospect of needing to form a coalition. In Saxony, the AfD already received the highest number of votes in the 2017 federal election. It cannot be ruled out that the far right will share state power in Dresden, the capital of Saxony, after state elections next year.

While criticizing the far right’s populist agitation, Ellwangen’s Mayor Hilsenbek also points out the mood among his constituents that, he warns, politicians disregard at their own peril. “We’ve had moments in Ellwangen when parents said they will no longer send their kids to the bus stop and instead drive them to and from school.”

The worries of Ellwangen’s mayor reflect the dilemmas many municipal leaders throughout Germany are facing. From the Baltic coast in the north to the Alps in the south, from the western Rhineland to the banks of the Oder River bordering Poland, mayors and council members across Germany report a sense among their constituents that Chancellor Angela Merkel and her refugee policy have left the country’s towns and cities to fend for themselves. “Shelters, especially, are very hard to organize at the moment,” Hilsenbek says.

Following the events of New Year’s Eve 2015–16, when numerous women in Cologne reported incidents of sexual harassment by northern Africans, conditions in and around places like the LEA have become a second yardstick for everything that has allegedly gone wrong in Germany’s experience as a country of asylum – irrespective of the fact that the volunteer spirit of helping refugees after their arrival in Germany remains prodigious.

Still, one thousand days after Merkel’s iconic utterance – “we can do it” – hopes of a lasting and pervasive Willkommenskultur in Germany have been dashed. All her attempts to respond with factual arguments merely draw fresh criticism. Despite all the success stories, Merkel’s Culture of Welcome has vanished into thin air.

First and foremost, it has been Interior Minister Seehofer fanning the flames. The Bavarian CSU chairman first attacked the chancellor and her refugee policy in the fall of 2015. This summer, Seehofer jeopardized the federal government’s very existence in a dispute over deporting rejected asylum seekers. Fearing an AfD surge in October’s Bavarian election, Seehofer has lashed out repeatedly at Merkel: “The migration issue is the mother of all political problems in this country!”

To resolve this “mother of all problems,” Seehofer demands fast deportations. “Anyone who has applied for asylum and received a rejection is compelled to leave this country,” he says. Yet experts on asylum have grave reservations with this approach: Numerical evidence does not suggest that deportations will lead to more refugees integrating successfully. In 2015, when a record 890,000 people sought asylum in Germany, 20,000 were sent back. In 2017, according to the government, the latter figure was nearly 24,000.

“Are we too dumb to deport?” the tabloid newspaper Bild asked in a headline this summer. It is a question that, following incidents such as those in Ellwangen, repeatedly enflames public sentiment. It also cannot be answered as simply as the far-right populists would have voters believe, says mayor Hilsenbek. He vehemently rejects the so-called “anchor centers” that, following Bavaria’s example, Seehofer would set up around the country to facilitate deportations of unwanted refugees. “If we in Ellwangen had to shelter people with no prospect of work, that is, people who are simply waiting to be deported, social peace here would be seriously threatened.”

Alternatively, he believes citizen activism is the way forward. “I think that in all of Germany, Ellwangen is unparalleled. A town of 24,000 inhabitants sheltering 4,500 refugees. That is truly a brilliant achievement.” 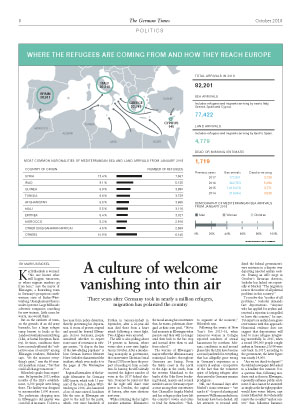