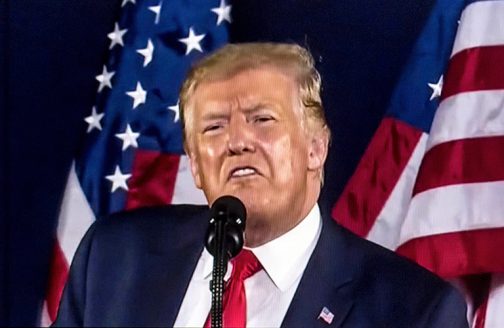 Donald Trump wants one thing above all others: unconditional victory. Everything he does revolves around the consideration of whether the move will benefit him personally.

He pulled off a surprising win in 2016. As the 45th US president, he has since busied himself with smashing the legacy of his predecessor, Barack Obama, and setting the course for his reelection on Nov. 3, 2020.

The fact that his prospects for success are not as he had envisioned them – in large part due to the COVID-19 pandemic – has fostered rumors in the US that Trump may bow out of the race before November, especially if his poll ratings continue to plummet. While this eventuality seems improbable, the scenario says a lot about its central player; like an angry child, Trump, so goes the thinking, could simply break the game to bits if he feels he’s going to lose.

But what would Trump want to accomplish in a second term? A cursory analysis yields the following answer: not a whole lot. Indeed, a late-June interview the president granted to Sean Hannity on Fox News reveals as much. His rambling, entirely substance-free answer to the question of his priorities for a potential second term cited only the importance of the word “experience” and that before taking office he had been to Washington, D.C., a mere 17 times. But now he knows everyone and has “great people in the administration,” so he wouldn’t make any more mistakes like hiring “an idiot like John Bolton,” who wanted only to “drop bombs on everybody.”

Most others, especially politicians, possess more power of imagination when it comes to the future. In an interview in mid-June, Bolton, Trump’s newest former national security advisor, declared that the world should expect the worst in the event that Trump wins a second term – in particular that the US actually pulls out of NATO and that Trump throws into question alliances with “far away” partners such as Japan, South Korea and Australia.

Many experts share the assessment that the US under Trump II would further retreat from the responsibilities on the global political stage that it had once embraced and dominated. The recent news that the president is seeking to withdraw 9,500 troops from Germany is in line with this prospect.

Many of his followers support his claim that America has shouldered other countries’ concerns too much and for too long while neglecting its own problems. Trump’s promise to change this dynamic – to bring US soldiers home and force other countries to contribute more to the burdens of the West, and thus to “make America great again” – was critical to his electoral victory in 2016.

What will he offer voters, beyond himself for four more years, in the run-up to November? That will be interesting, particularly for undecided voters – as well as for the rest of the world.

Will he, for example, continue to denounce existing trade agreements with promises of making better “deals” for Americans? He hasn’t made much progress in this regard over the first three and a half years of his presidency. Negotiations with the Europeans are on ice, and the little progress Trump had achieved in talks with China has been negated by his aggressive rhetoric concerning the pandemic.

His administration’s major foreign policy initiatives – carried out with little or no regard to the international community – also appear unsatisfactory. The Middle East “peace plan,” touted as “the deal of the century,” is hardly ever mentioned, except that Israeli Prime Minister Benjamin Netanyahu now wants to officially annex large swaths of Palestinian territory, which is almost certain to lead to the declaration of another intifada.

Trump’s approach to North Korea paints a similar picture. Nothing productive has resulted from the administration’s 2018 gambit of the first-ever summit between the leaders of North Korea and the US. In fact, Pyongyang has now resumed testing nuclear missiles and is threatening to march soldiers into the neutral zone along its border with South Korea.

As Trump is not known for having patience or staying power in difficult matters, he now only rarely speaks of this problem. He has long since moved on.

“America First” was and is his doctrine – this is almost certain not to change. All foreign policy decisions are a product of this approach, at least in theory, yet the results of his foreign policy are seldom to the benefit of the US. In fact, the opposite is more often true.

American farmers are suffering under Trump’s trade disputes with China and the Europeans, and it’s certainly fair to doubt whether America’s interests are better served by withdrawing from the world. Although Trump is not the first US president to call for a more equitable sharing of burdens among Western allies, he does so with uncommon brutality while publicly threatening to further retreat from international institutions and responsibilities if America’s partners to do not behave as he expects them to. The idea of compromise is abhorrent to him – if he doesn’t get what he wants, he storms off the playing field.

In matters of arms control, his decisions are particularly incendiary. On May 22, the US terminated the Treaty on Open Skies. Shortly thereafter, US media outlets reported that the government in Washington was contemplating the resumption of nuclear testing. Numerous experts assumed that the US would also decline to extend the New START treaty with Russia, which limits the nuclear weapons potential of the two countries and is due to expire in February 2021. While it may be true that countries like China are not bound by such treaties, it is irrational even to refrain from improving or expanding existing treaties, to say nothing of terminating them, and thus relinquishing all access to information on an adversary’s nuclear arsenal.

This action resembles the administration’s announcement that the US would cease its involvement with the World Health Organization (WHO) – in the middle of a global pandemic unrivaled by anything a pathogen has caused since 1918. While the WHO has been far from perfect in its handling of the current crisis, who would argue that the virus wreaking havoc across the world is best contained through the unilateral, uncoordinated approach of dozens of various countries?

Yet Trump is apparently working from the assumption that the economic and military superpower he presides over will succeed by dint of extreme egoism alone, that alliances, compromises and mutual trust-building measures only limit and thus weaken his country, and that America’s security can best be guaranteed by going it alone.

What may sound strategic is perhaps nothing more than grandiose self-delusion. Where the US creates voids through its abdication and disinterest, they are quickly filled by other great powers such as Russia and China. When the US executes a hasty retreat, it succeeds in creating blind spots vis-à-vis newly emerging dangers. And when it disregards or even undermines the tool of diplomacy by disparaging it as an instrument of the weak, it does so to the detriment of even its closest partners, and ultimately itself. Countries like Russia and China are waiting with open arms, with hopes of cozying up to America’s alienated allies.

Time and again, this US government, with Secretary of State Mike Pompeo leading the way, has waged a “maximum pressure” campaign to steer stubborn countries onto what it sees as the right track. What this policy has thus far achieved is negligible. In terms of the Iran nuclear deal, for example, the Europeans argue that America’s unilateral 2018 withdrawal from the treaty, as imperfect as it was, has made Tehran’s nuclear activities more difficult to control.

A favorite argument of Trump and his administration over the past three years has been that previous approaches to problems have not borne fruit, so why not try something completely different – be it in matters of trade, the Middle East, Syria, Afghanistan or relations with North Korea. Trump relishes his role as “disrupter in chief,” as the one who swoops in from outside to practice politics in a way that no one before him ever has.

In an astounding display of hubris, he has ignored and continues to ignore advice from experts, turning instead to loyalists. Since taking office, the US government has seen an exodus of experienced diplomats, security professionals and now economic experts – the likes of which the country has never suffered. During the COVID-19 crisis, the economy-obsessed president is increasingly covering his ears when his highly regarded science experts, above all the renowned immunologist and infectious diseases specialist Anthony Fauci, deliver bad news. Yet whenever the second-in-command, Mike Pence, praises his president’s “phenomenal results,” Trump lends his unwavering attention. It’s not only his country that must grapple with the results of this ignorance; that task falls to the entire world.

It would appear that Trump simply does not to want to understand that the problems, as a general rule, are more complex and cannot be solved with the wave of a hand, that geopolitics requires strategy, not ideology, that wars (Afghanistan, Syria) do not simply end when troops are withdrawn and his eyes stray elsewhere. Trump has shown nothing but disdain for a rules-based international order that allows as many human beings as possible to prosper and makes the world a more peaceful and fairer place. 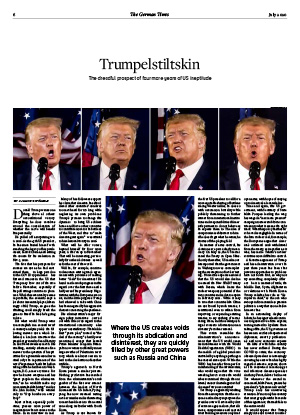