Recent meetings of the Group of Seven (G7) have been rather ominous affairs. One never knows what US President Donald Trump will make of these summits, which he regularly and openly disparages. To agree on an initiative for talks between the United States and Iran, of all countries, at the meeting in Biarritz was therefore even more surprising, including to many of those present at the posh Atlantic seaside resort.

Yet French President Emmanuel Macron’s coup of inviting Iranian Foreign Minister Javad Zarif to town paid off. Importantly, he had secured Trump’s approval for this move during a tete-a-tete over lunch before the summit’s official opening. Iran, in contrast, now appears to be confused as to what it can expect from the initiative, given that any high-level public meeting with a US representative is considered taboo in Iran as long as US sanctions are crippling the country.

“To talk or not to talk,” that is the question for policymakers in Europe, Iran and the US. And what should they talk about? The nuclear deal and regional issues top the agenda. But is talking really worth it?

Regardless of the flurry of comments on possible talks, Iran has stuck to its policy of gradually reducing its commitment to the nuclear deal. One year after Washington pulled out of the agreement, Tehran has begun to disregard some of its limitations. After passing the agreed threshold for low-enriched uranium stocks as well as the level of enrichment itself, Iran began its “third phase” of non-compliance by engaging in previously banned areas of centrifuge research and development.

These purportedly reversible steps are meant to put pressure on the remaining parties to the deal – the EU, France, Germany and the United Kingdom as well as China and Russia (EU/E3+2) – to stick to the promises made to Iran involving oil exports and financial transactions. While the E3+2 countries maintain that the deal can be saved despite US withdrawal and Iranian (partial) non-compliance, none of the agreement’s signatories has thus far triggered the official complaints procedure.

Over the summer weeks leading up to the G7 summit, the Persian Gulf was the focus of world attention. A string of attacks on tankers, often attributed to Iran, brought tensions to a boil. When Tehran downed a US drone in its airspace – so it claimed – President Trump ordered an aerial attack in response, only to call it off at the last moment. Meanwhile, Washington has begun its Operation Sentinel to patrol ships through the Strait of Hormuz, with the support of Australia, the United Arab Emirates (UAE) and the UK.

The latter became embroiled in a tanker standoff closer to home, when it had an Iranian vessel seized for breaking EU sanctions on oil trade with Syria (the ship’s destination after passing the Strait of Gibraltar). Iran retaliated by compounding a British tanker in the Gulf, and while the UK ultimately released one ship, Grace 1 (now renamed and reflagged as Adrian Darya 1), the Stena Impero is still being held by the Revolutionary Guard.

This comes as Israel has widened its attacks on Iranian-supported groups in Syria, but also in Lebanon and – most worryingly from an American perspective – Iraq. At the same time, the Arab anti- Iran front seems to be weakening, with the UAE making the boldest moves: It has tacitly withdrawn from the Saudi-led coalition in the Yemen Civil War and sent an official delegation to Tehran to discuss maritime security, after refusing to blame Iran for sabotaging one of its tankers in May. As it happens, despite being staunchly opposed to Iran, Arab Gulf states have no inclination to go to war with their neighbor.

By maneuvering to organize direct talks between Iran and the US, the French are running a risk. Not only have other intermediaries been rebuffed before – Japan’s Prime Minister Shinzo Abe comes to mind – but now their European partners are also miffed. They fear that whatever comes out of the talks may actually weaken the current inspection regime without getting a nod from Washington for the existing deal.

Such a reversal of the American position is precisely what would be needed to facilitate a historic encounter between the two presidents – think of Macron standing between Rouhani and Trump like Carter did between Begin and Sadat at Camp David. Could Trump really enforce a U-turn against his own advisors and dial down the “maximum pressure” campaign to help Iran “over a very rough patch,” as he said after the G7 summit? No doubt, many in Israel are worried about such a change of heart, in particular Prime Minister Benjamin Netanyahu, who made his close relation with the US President a focus of his election campaign.

The greatest resistance, however, is coming from Iran itself. Immediately after Zarif ’s surprise visit to France, a fierce domestic debate erupted over the issue. Hardliners of all stripes lambasted Rouhani for trusting the US by signing the nuclear deal in the first place. Dismissing talks as a mere photo op without the prior lifting of US sanctions, they have boxed the president in. Not talking to the “Great Satan” has been established policy for 40 years, so it has become a question of national pride whether – and under which heavily circumscribed conditions – such an encounter could take place.

The UN General Assembly in late September has been mooted as a possible occasion for a meeting of the two presidents. Providing an off-ramp from the current brink would be a good start, and could be achieved by suspending US sanctions in return for Iran’s renewed compliance with the deal, a move that could possibly be sweetened by a credit line from EU countries to give Iran immediate economic relief. Yet the parties would also have to address more substantive issues of regional security, from commercial shipping in the Persian Gulf to the defense postures of littoral states.

Once you start talking, there’s always more to discuss.

Cornelius Adebahr
is an independent political analyst and consultant. He is a nonresident fellow at Carnegie Europe in Brussels and an associate fellow of the German Council on Foreign Relations in Berlin. He is the author of Europe and Iran: The Nuclear Deal and Beyond (Routledge 2017). 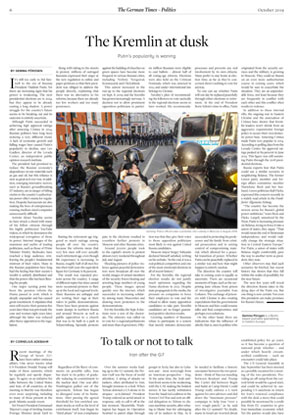