Joschka Fischer is afraid. As Fischer turns 70 this year, this one-time rebel who crusaded against capitalism and the state back in the late 1960s only to join the establishment as German Foreign Minister from 1998 until 2005 for the Green Party, now dons the mantle of Elder Statesman. It’s a role he assumes with such gravity that it borders on caricature.

His latest work, a geopolitical analysis titled Der Abstieg des Westens. Europa in der neuen Weltordnung des 21. Jahrhunderts (The abdication of the West. Europe in the new world order of the 21st century), is more like an encyclopedic collection of all the themes, venues and catchwords currently in circulation: the rise of China, the fall of the US under Trump, the necessity of reform in the EU – and, of course, the crisis of Western liberal democracy.

Fischer writes: “We contemporaries of the early 21st century are witness to the dawning of a new world order;” “The century of China, and of Asia, is upon us;” and “The world stands on the brink of a transition process harboring risks we cannot afford to overlook.” Fischer’s observations on the overall geopolitical situation are hard to controvert, as he presents them via countless “open questions.”

More of a primer than a tome, his book reads as if written by Siri – wavering between rational and benign while describing the precarious state of the world in a paint-by-numbers fashion.

Herfried Münkler is the preeminent political scientist in Germany. The prolific Berlin professor has written thick and learned books on Machiavelli, World War I and the rise and fall of the great powers. But he also understands how to mix in current political debate – not so much through standard op-ed pieces, but rather through sound scientific analysis that finds purchase in foreign policy circles here on the Spree. In his most recent essay Eine neue Sicherheitsarchitektur für Europa? (A new security architecture for Europe?), featured in the July issue of the highbrow Merkur – the German journal for European thought – Münkler delivers several strategic policy reflections while pulling no punches with regard to Europe’s foreign policy elite.

The narrative of the West as an alliance based exclusively on shared values is a sustainable – if abbreviated – construction, he argues; it is a narrative for those seeking warmth and comfort, a “politics of memory for simple minds.” Münkler subsequently indicates what it means for the EU to be “no longer the security policy lackey of the US;” it means a break with the “rehearsed routines of bureaucratic projects” to bring together state funds; it means corporate engagement and civil society actors in the Middle East; it means a phase-out of the “inflexible and ineffective sanctions policy vis-à-vis Russia” combined with the “determination – by both sides – of the respected spheres of influence between the EU and Russia;” and, finally, it means a “renunciation of the ban on state transfers” to the southeast flank of Europe, which will costs lots of money, especially for Germany. Münkler argues that a Europe of collective values must be augmented in the future “through the observation and acceptance of geopolitical realities.” Required reading.

German journalist Bernd Ulrich is unrivalled in terms of provoking highly passionate disputes, both in Berlin and between intellectuals across the country. The chief political editor at the liberal weekly Die Zeit pens elegant big-picture essays nearly every week. With his well-reasoned yet distinct moral bent, Ulrich epitomizes the smart, non-ideological center-left view of politics. It is the former that has made him so beloved and so despised.

In his book on the “West at the dawn of a new era,” Ulrich proceeds from the observation that the stability of states and religions relies not on institutions, “nor even on power and might, but on something altogether different: the humility of the humiliated.” He argues that old formulae for the legitimation of sovereignty and suppression no longer function in the new one-to-one society of the internet age, in which everyone is in a position to express their demands and advocate for their rights.

In the chapter on trans-Atlantic relations, Ulrich treads these premises to further analyze the reasons for Donald Trump’s aversion to Europe. If the US president possesses any strategic ideas whatsoever, he argues, they have something to do with a desire to pass on the rising costs of hegemony and the diminishing returns amid the waning effects of order: “In the future, every positive achievement for the greater good must be compensated with cash. The US is a service provider with no missionary pretentions, a nation like any other. Only stronger.” Friend and foe alike may sharpen their intellectual incisors on the pages of Ulrich’s book. 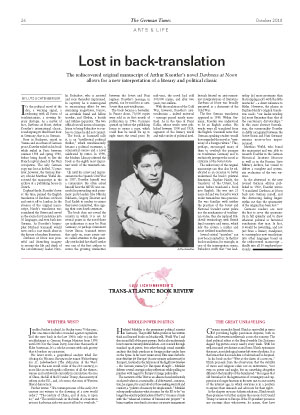