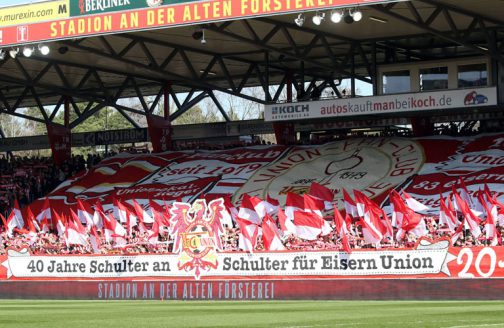 It’s a Saturday afternoon in late March. Our destination is a home game at the Alte Försterei stadium, deep in the east of Berlin. The further the S-Bahn takes us in the direction of Köpenick, the more crowded it gets, and the more red-and-white scarves and other gear we see on fans of the 1. FC Union Berlin soccer team. The atmosphere is relaxed, and the crowd is made up mostly of older men interspersed by all variations of red-and-white striped families and their kids. Women are definitely outnumbered, but they nevertheless have a presence here. All the parking spaces around the stadium are full and the S-Bahn trains are bursting at their seams, as are the trams. The exit at S-Bahnhof Köpenick station is too narrow for the masses of people, but the police are relaxed, standing at their post next to the sausage stand in the station. Today’s opposing team is SC Paderborn 07, a worthy opponent, but not a team known for its rabid fans. Things are quite different when a team like SV Dynamo Dresden travels to the stadium; those games require an increased level of security.

1. FC Union Berlin is known for its working-class tradition and underdog status but also for its sense of solidarity and spirit of political resistance – that reaches back to the days of the divided city. And there’s always something to these labels, even if many elements of the team’s reputation have already become the stuff of myth, including the legend of the 11 locksmiths on the field and the battle cry “Eisern Union” (iron union). At 1. FC Union, every player is a soccer god. Union represents the east, too, and above all Köpenick, the city district whose sheer obstinacy was able to preserve its municipal autonomy well into the 20th century. It also stands for a deep-rooted Berlin dialect that no one on the other side of Berlin speaks anymore.

The Alte Försterei’s location at the edge of a wooded area called the Wuhlheide means that the path to each home game is part of a ritual that includes a walk through the forest. In the past, the walk back from the stadium was often the march of a losing team, sometimes even of a sorely beaten one. As the Union joke goes: “When god created the world, he spoke to the stones and said: ‘Do you want to become Unioners?’ And the stones said ‘Yes, but we’re not hard enough.’ ”

Back in the GDR, Union was an “elevator team,” that is, a team that went up and down between the first and second leagues, while their much-hated East Berlin rival, BFC Dynamo, the favorite club of the Minister of State Security, won one championship after the next. Suffice it to say that there were often what you might call “inconsistencies” at play in that era. These days, Dynamo plays in a division two leagues below Union.

In 1968, Union had one of the first women’s soccer teams in both Germanys. This was at a time when women in West Germany were still kept from playing soccer in clubs due to the preposterous idea that women’s bodies and souls would suffer if they did – and because such public displays of their bodies would supposedly offend standards of decency and propriety. In East Berlin, this brought about great mirth and shaking of heads.

For their part, the fate of Union’s men’s team serves to illustrate many of the upheavals of the postwar period in East Berlin: relegation, ascent, renewed relegation down to the fourth division, debt, the struggle to stay alive and a brush with bankruptcy. The same was true for the fans, too, many of whom were well-educated and skilled workers. After the two Germanys unified, 22,000 jobs were lost at the nearby Oberschöneweide industrial area, the equivalent of one full Union stadium. With them went the livelihood of entire families. The career paths of some of Union’s older fans also mirror this experience: pre-reunification training in shift-based systems at largescale GDR factories, unemployment after the fall of the Wall, various transitional jobs, some even outside of Germany, re-training, additional training, jobs at companies that went bankrupt, failure to be paid by dodgy entrepreneurs – the whole kit and caboodle.

Soccer is a great anchor, though. Even if your entire existence is wavering, the stadium at the Alte Försterei remains a reliable home, no matter what division the team is in. Union fans now come from all over. There’s even a “Union in English” online portal for English-speaking enthusiasts.

Much has been said about the undying love Union fans hold for their club: they donated blood and gave the proceeds to the club; they emptied their piggy banks to purchase shares in the team; they refurbished the stadium themselves; and they invented the often-copied annual Christmas Caroling event at the stadium, which 30,000 people attend every year on Dec.23. Nowadays, Union fans even buy pricy beer in their stadium.

However, the bonds that tie the club to its fans are occasionally put to the test. Having made an official commitment to tolerance and open-mindedness, the club and its economic council have implemented a number of programs, including a job network for refugees, that have not been well-received by all Union fans. Yet when an anonymous fan made anti-Semitic comments online about the Ingolstadt player Almog Cohen just a few weeks ago, the response was unanimous in its condemnation. The club reacted immediately and called on Union fans to fight all forms of racism.

People still disagree when it comes to determining the best Union era. Was it when the team still played for only 600 people and fans could sit on the curbstones and chat? Or is it better today, when almost every game is sold out and there are almost as many club members as seats in the stadium? Either way, the thing that matters most is something else, and it can be summarized as follows: “We’re not going to just any soccer game, we’re going to Union.”

1. FC Union Berlin has been playing in the second division since 2009. At the moment, the club is in third place, which means their ascent to the first division, the Bundesliga, is entirely possible. This also means people in Berlin are increasingly hearing the typical Union phrase “Scheisse, wir steigen auf!” (Shit, we’re moving up!). It’s a statement that perfectly captures Union fans’ ambivalence toward reaching a higher division. After all, what happens when big companies get involved and start making their own decisions for the team?

On this particular Saturday, as before all games, fans add the word “Fussballgott!” (soccer god!) after each player’s name is announced over the loudspeaker. This time, however, they have an extra “Fussballgott” for the Paderborn coach, Steffen Baumgart, a former Union captain. Fans don’t forget things like that here. Even when Baumgart’s Paderborn team manages to put a stop to Union’s 20-game undefeated streak – in their own stadium, of all places – Union fans celebrate their former captain anyway. 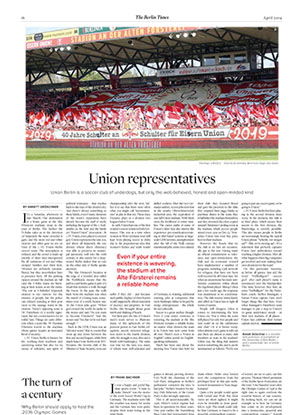