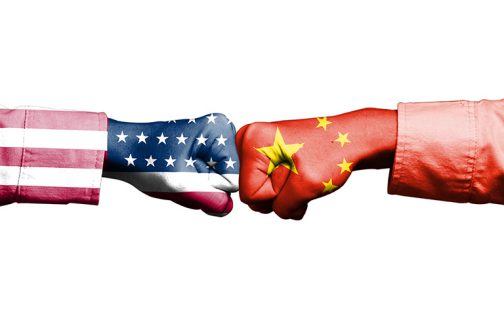 For almost a decade, China’s relentless rise has been feeding fears that, under the leadership of Xi Jinping, Beijing was steadily tiptoeing to world domination. The most remarkable economic transformation in the history of mankind went hand in hand with China’s burgeoning ambition to regain the position it lost in the early nineteenth century as the center of the world, with the Middle Kingdom ruling “all under heaven.”

China has emerged as a formidable challenge to the West. Many observers have long since started worrying about the prospect that the country’s blatant authoritarianism seemed destined to wipe out the liberal international order and deliver the deathblow to democracy as the world’s guiding paradigm. By relentlessly propagandizing its mastery of the COVID-19 crisis and by taking aggressive action in its lee, Beijing squandered much of the respect the regime had earned for its resoluteness – that is, after its initial attempt to obfuscate the outbreak. Throwing its weight around “loud and proud” as the world became ever more distracted by the virus was widely seen as provocative behavior.

Thus, not only has China’s growth streak been interrupted by the pandemic, the much more important fact is that its reputation, reliability and trustworthiness have been tarnished by the brazenness of its “Wolf Warrior” diplomats, its bullying of trade partners such as Australia and the denigration of countries that criticize its policies, such as Sweden. Everywhere, views have been hardening about China’s rejection of economic reciprocity, its continued insistence on coercive technology transfer, its industrial acquisition designs, its overt and covert influencing campaigns, and its military actions and ambitions in the Indo-Pacific region. Violent skirmishes with India in the Himalayas, military maneuvers in the South China Sea and near Taiwan and the crackdown on Hong Kong have heightened Western unease. All over the globe, governments are rethinking their China policies with greater or lesser degrees of anxiety and concern.

The relationship between China and the United States is a special case. It was very much a roller coaster before Donald Trump moved into the Oval Office, but it has become a central point of contention ever since he took over. “China is not our friend,” he wrote back in 2011. “China is stealing our jobs, sending a wrecking ball through our manufacturing industry and ripping off our technology and military capabilities at Mach speed.”

From the beginning of his term, Trump was eyeing an economic showdown. In order to reduce the US trade deficit ($419.2 billion in 2018, $345.6 billion in 2019), he imposed punitive tariffs on China’s import goods. “Trade wars are good and easy to win,” was his conviction. He took in stride China’s geopolitical comportment, its human rights deficiencies and its military expansion in the South China Sea, as long as its trade surplus was on the decline. In this vein, after almost two years of trade warfare, Washington and Beijing concluded a Phase One Deal about their commercial relations on Jan. 15, 2020.

That deal is now on the brink of collapse. The ink had hardly dried when Trump blamed the Chinese for “sending the Plague to us” in one of his countless infamous tweets. “We went through the worst attack we’ve ever had on our country,” he told reporters. “This is worse than Pearl Harbor, this is worse than the World Trade Center. There’s never been an attack like this. And it should have never happened. Could’ve been stopped at the source. Could’ve been stopped in China. And it wasn’t.” He insinuated that the Chinese knowingly let the virus loose on the world out of a Wuhan lab. For this reason he not only threatened a total rupture of their trade relations – “economic decoupling is still on the table” – but also hinted at the intention to stop servicing the $1.2 trillion of US debt to China.

A Phase Two Deal settling the fundamental issues seems no longer in the offing. The US president has decided to scapegoat China for the devastating effects of the deadly pandemic on his country: the worst economic crisis since 1929, with an unemployment rate greater than 11 percent, over 3.8 million infections and more than 142,000 people killed. Hostility to China has become the central message in his campaign for reelection. While this may be ascribed to his political calculations (and his volatile temper), there is more to it than just that. It’s been official policy for over two years now.

The National Security Strategy, published in December 2017, named China a “revisionist power” that wanted to shape a world antithetical to US values and interests: “China seeks to displace the United States in the Indo-Pacific region, expand the reaches of its state-driven economic model, and reorder the region in its favor as its preeminent power.”

The view that the People’s Republic is a strategic adversary has since been vented by Vice President Mike Pence and, more recently and more stridently, by Secretary of State Mike Pompeo in formulations tantamount to a declaration of Cold War. This January in London, Pompeo declared the Chinese Communist Party “the central threat of our times;” in The Hague in June, he asserted that “China wants to be the dominant economic and military power in the world, spreading its authoritarian vision for society and its corrupt practices worldwide.”

As tensions between the United States and China have grown, Europe’s approach to China has also taken a hardline turn. The Europeans are not seeking confrontation with Beijing, but they also want a level playing field, reciprocity of market access and equal investment opportunities. And at this point they are sick and tired of Chinese procrastination. They hear Xi Jinping’s endlessly repeated promises, but now they want to see his deeds. While they will continue to press for the rectification of China’s more questionable industrial and regulatory policies, they have also been taking an increasingly critical view of Xi Jinping’s exercise of hard power domestically as well as internationally.

In a paper published in March 2019, the European Commission and the High Representative for Foreign Affairs were still describing China in a very differentiated way. They called it a cooperation partner with whom the EU closely aligned its objectives; a negotiation partner with whom the EU has to find a balance of interests; an economic competitor in pursuit of technological leadership; and, finally, a “systemic rival” promoting alternative models of governance. The authors recommended that “the EU should robustly seek more balanced and reciprocal conditions governing the economic relationship.”

The call for a more robust EU strategy vis-à-vis China in the political bailiwick as well has since become a dominant theme both of the new Commission President Ursula von der Leyen, her Foreign Affairs Representative Josep Borrell and German Chancellor Angela Merkel, who assumed the EU Council’s presidency on July 1 for the next six months. For September, Merkel had originally scheduled an EU-China summit in Leipzig to resolve a number of stalled policy issues, but the pandemic has put paid to her plan. In its place, a six-hour video conference held on June 22 between the EU top leaders and, in successive calls, with Premier Li Keqiang and President Xi Jinping revealed that the two parties were far apart. They could not even agree on a joint final communiqué.

The EU leaders made no bones about the lack of “trust, transparency and reciprocity” in their relations with China. Therefore, they talked tough to Beijing regarding a long list of topics, ranging from slow progress towards an investment treaty, unfair rules for market access, dumping prices and state subsidies to China’s unambitious climate change targets, its delaying tactics concerning WTO reform and its continuous cyberattacks on European computing systems. Von der Leyen also pointed the finger at Beijing’s disinformation campaign over the course of the pandemic and warned of “very negative consequences” should the regime go ahead with the national security law for Hong Kong.

Spurning dialogue with China is not an option for the EU. It will continue to explore avenues of cooperation in fighting the COVID-19 pandemic, securing a speedy economic recovery and mitigating climate change, but its stance will no doubt get tougher. The Europeans will defend their own values, assure their interests and try to preempt Beijing from imposing its rules, norms and standards on the rest of the world. They don’t want another Cold War. Yet Henry Kissinger rightly reminds them: “The reality of rivalry must not be ignored.” They will thus heed the somber warning of Kevin Rudd, the former Australian prime minister, current president of the Asia Society Policy Institute and one of the world’s leading China experts: “Global geopolitical risk is now back with a vengeance. We should all fasten our seatbelts for a rocky road ahead.” 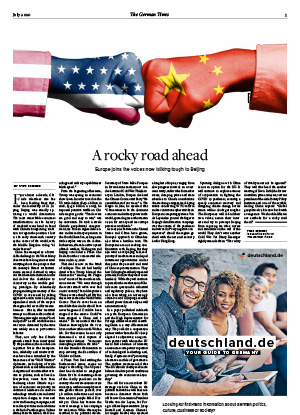