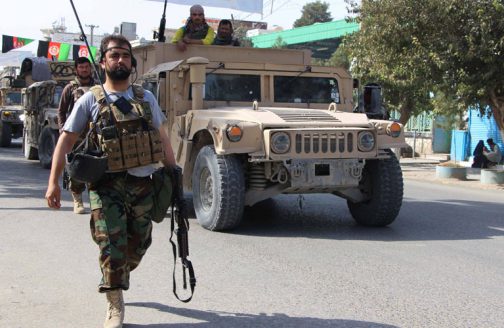 The future of Afghanistan is obscure. Nobody can say what it is going to bring for the people of the Hindu Kush, but all signs point to the beginning of a new chapter in the country’s long and bloody history – a chapter in which the role played by Western countries shrinks until one day in the not-too-distant future, when they will have disappeared from the country entirely.

Withdrawal is becoming more likely with each passing day. Almost two decades after the terror attacks on New York and Washington, when Al Qaeda fighters flew hijacked civilian planes into symbols of America, destroying them and killing thousands of people, calls for retribution in the US have become muted.

Other issues have now come to the fore, in the US and among its Western allies in Europe. Afghanistan has once more become a secure harbor for terrorists, or perhaps it never stopped being one.

Although Osama bin Laden is dead, the Al Qaeda network lives on and another, no less dangerous organization, the Islamic State (IS) terror militia, has become established in the Hindu Kush. And the Taliban, which once hosted Osama bin Laden, is again gaining ground. A broad alliance of countries, supported by the Americans after Sept. 11, 2001, had swept them away and even driven them out of impassable mountain regions, but by now they once again control more than half the country. Eighteen months ago, they had only around a third.

The Taliban control mainly rural areas, from which it repeatedly makes incursions into cities and attacks state security forces. No army base is safe from these attacks, which are now part of everyday life, even in the capital of Kabul.

In recent weeks, the Taliban even stepped up its activities, carrying out a spate of high profile attacks, including one that killed a US soldier in early September of this year.

The US had been negotiating with the Taliban for a year now. The ninth round of talks between the self-proclaimed holy warriors and US special envoy Zalmay Khalilzad went down in Doha.

On Sept. 9, Trump cancelled the peace talks with Afghanistan’s Taliban leaders scheduled to take place at Camp David following Khalilzad’s preparations in Doha. “They’re dead. They’re dead. As far as I’m concerned, they’re dead,” Trump said about the talks. The US general in charge said the military was likely to ramp up operations in Afghanistan to counter the increase in Taliban attacks.

The plan for a treaty that would bring Afghanistan something resembling peace after decades of war and bloody conflict is thus hanging in the balance once again.

This treaty was meant to give the US government an opportunity to withdraw from the Hindu Kush, quickly and without losing face.

President Donald Trump took office with a promise to bring US troops home after what was then 15 years of fighting. In the fall of the coming year, he will seek reelection. By then he will have to show some degree of success and somehow keep his promise to his voters, at least as far as the Hindu Kush goes.

This could mean a swift reduction of the 14,000 troops in the US contingent. Perhaps even more. Although Trump recently announced that 8,600 US soldiers are slated to remain, his lack of reliability as his own spokesman suggests that we take this information with a grain of salt.

In many capitals across Europe, the talks and intention to withdraw from Afghanistan were being observed with mixed feelings. Several partners joined the mission in the Hindu Kush out of solidarity with the US. Some have now left it, but 39 nations are still involved in military operations there. They all know the many strategies and operations designed to bring Afghans peace, ranging from driving the Taliban out – then stabilizing Afghanistan and getting involved in the war against the rebels with a presence of 220,000 foreign soldiers – to subsequent repeated restrictions on support for Afghan security forces.

No one wants more decades of military engagement in the Hindu Kush. At the same time, hopes for an end to the fighting are mixed with skepticism, given the manner and speed with which the US government is currently pursuing both talks with the Taliban and its plans for withdrawal.

The question of exactly what the Americans are planning is being posed with increasing volume at NATO headquarters in Brussels and in the German defense ministry. The answer has more than diplomatic significance for US allies, as they rely heavily on the Americans.

Without Washington, they would be forced to withdraw quickly from Afghanistan, especially the Germans, who have around 1,300 soldiers in the north of the country. Germany’s army relies on the US for strategic air transport, combat helicopters and targeted drone missions as well as for air support for troops on the ground.

Another 20 allied states operating in the north also rely on Germany and would not be able to continue their missions without its army, so simply withdrawing is not an option for the Germans. The security situation in the north is also far too fragile. The German army’s soldiers go to training missions almost entirely by air.

If the Americans leave and withdraw their key capabilities “overnight,” they would leave their allies in an extremely difficult situation. It would also be a unique occurrence in the history of NATO.

When asked to comment on the security situation in and around Mazar-i-Sharif, the location of the Bundeswehr’s largest base in Afghanistan, a spokesperson for the German Operations Command there responded that it is “mainly under control.” He went on to say, however, that the “presence of armed groups, some of them terrorists, and their activities cannot be completely prevented or stopped. In this context, the possibility of a temporary and significant deterioration of the security situation in urban areas of Mazar-i-Sharif, possibly without warning, cannot be excluded.”

Even more worrying was his statement on conditions outside the extended urban areas of Mazar-i-Sharif, especially in districts in the province of Balkh to the west and southwest: “The security situation [there] has undergone a qualitative deterioration to varying extents in the past 12-18 months. Despite the various efforts of the Afghan National Defense Security Forces (ANDSF), it can be assumed that the security situation here is generally no longer under control in large contiguous areas. An improvement in the current situation is not likely in the long term.”

The strategic risks of withdrawal would be more serious for the Europeans than for the US. An agreement with the Taliban to not shelter global terrorists may be achievable, but given the country’s history, the promise of a durable peace is of little value. The West would leave behind a power vacuum that the Afghan government could never fill on its own.

Every year, around a quarter of the Afghan army’s soldiers either desert or join the enemy. Without the help of the NATO mission Resolute Support, they would not be able to carry out most of their military operations.

It is hard to imagine what might happen after a treaty. The Taliban is no more a solid block than any other warring faction. If there is a treaty with the US, some of them may well splinter off and start fighting their former comrades in arms, cheered on by their regional supporters.

With the risk of a new civil war, any progress made in recent years would be completely undone. The flow of refugees from the Hindu Kush would become a flood and the consequences would dwarf the refugee crisis that destabilized Europe in 2015. 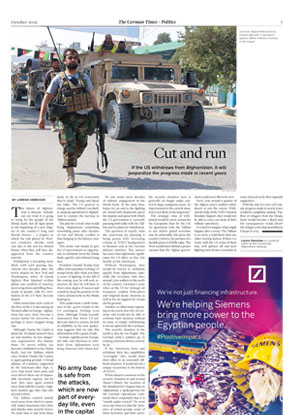