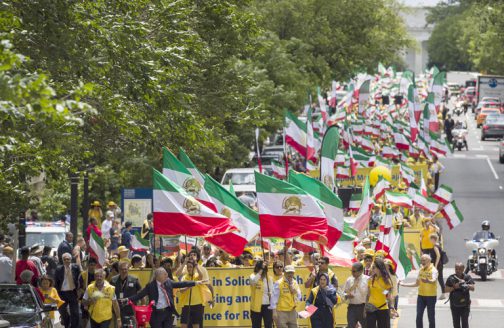 During the critical final phase of the negotiations over the nuclear deal with Iran in March 2015, John Bolton published an opinion piece in The New York Times titled “To Stop Iran’s Bomb, Bomb Iran.”

Is this bleak fear now becoming a reality?

At the very least, the danger of war between the US and Iran – with the potential participation of Saudi Arabia and Israel – is greater than at any time since 1979, when the Islamic revolution deposed the pro-American shah and the revolutionary students occupied the US embassy in Tehran for over a year. The attacks on six oil tankers in the Persian Gulf since mid- April – the exact circumstances and perpetrators of which are still unclear – as well as the mid-June downing of a US drone flying extremely near or, in fact, in Iranian air space provide a preview of how such a war might begin.

Since the Trump administration’s unilateral withdrawal from the nuclear deal in May last year, it has been waging an economic war with increasingly harsh sanctions against Tehran as well as illegal secondary sanctions to force foreign companies and third-country nationals to abandon trading with Iran. The effects on the Iranian population have been devastating.

Iran’s comparatively moderate president, Hassan Rouhani, is facing ever-increasing pressure from two sides. While the younger generations welcome reform and hope that the nuclear deal will improve the country’s economic situation, as well as their own outlook on life, the hardliners in Tehran have always been against the deal and now feel vindicated by the Trump administration’s bad-faith withdrawal.

It is quite possible that Tehran could soon undergo regime change. However, the shift would not be towards a more democratic government with a greater appreciation of human rights, as Bolton and other anti-Iran ideologues in Washington are said to be angling for. – The result of either the demise of Rouhani or, at the latest, the next presidential election in 2021 would rather be a victory for the hardliners in Tehran.

All signs point to further, seemingly unavoidable escalation, as the three European parties to the nuclear deal – France, the UK and Germany – have, besides offering up empty rhetoric, done nothing effective to enable Iran to continue selling oil or to maintain access to the international financial system. Fear of US sanctions has prevented the Europeans from even ensuring that Iran can purchase medicine and other humanitarian goods that are critical to survival.

Meanwhile, China, Russia and India have demonstrated how US sanctions can be circumvented. But this alone cannot suffice to keep the Iranian side in full compliance with the treaty. Iran’s announcement that at the beginning of July it would resume enriching uranium beyond the level of purity required for energy production and beyond the 3.67-percent cap permitted by the treaty could be followed by further breaches of the agreement as a way of exerting pressure on the Europeans.

Berlin, London and Paris have made it expressly clear that such violations would make Tehran, not Washington, responsible for the collapse of the agreement. But would they join an alliance to carry out military strikes, an eventuality that President Trump has said is still “on the table”?

The memory of the war of aggression carried out by the US and the UK in violation of international law is painfully fresh. The Iraq war and its catastrophic humanitarian consequences have cost more than one million Iraqi lives. The war and the subsequent eight-year occupation of Iraq by the US created a fertile ground for the proliferation of the terrorist organization known as Islamic State (IS). A war with Iran would most likely have even more devastating effects ¬ for Iranians, for their neighbors across the entire Middle East and for the rest of the world.

How Russia and China would react in the case of a military escalation of the conflict between the US and Iran is hard to predict. The only certainty is that the two UN Security Council veto powers will reject any US resolution to request international legitimation for military action against Iran.

Russia and China have considerable interests in Iran. For Russia, Iran is an important sales market for industrial goods in the fields of energy production, civil aviation and railway transportation, for arms and for nuclear technology; Russia built the Bushehr nuclear power plant in southwest Iran. The two countries also have identical interests in keeping the world oil market open. Their cooperation in military and nuclear matters is proving to have strategic significance.

While military cooperation between Moscow and Tehran in the Syrian conflict has been limited, their interventions using aircraft and ground troops have ensured, at least for the time being, the political survival of Bashar al-Assad’s regime. Since the Islamic Revolution in 1979, Russia has been the first country to be granted the right to use an Iranian air base – Noje, in the western province of Hamadan – for strikes against IS in Syria.

A planned tripartite meeting between top Russian, US and Israeli security experts in Jerusalem at the end of June has nourished speculation that a potential deal might be in the works. It is said that Iran will terminate its military presence in Syria in return for the US and Israel recognizing the Assad regime. It looks to be a very tall order.

In recent years, Russia has provided Iran with a S-300 surface-to-air missile system. This will give Tehran additional defensive weapons as well as reconnaissance capabilities in the event of possible air strikes or missile attacks by the US. The delivery of offensive weaponry that Iran could use to attack US ships or military bases in the Gulf region appears for now to be off the table, as would be direct military intervention by Russia in a possible war between Iran and the US.

The same goes for China. Beijing is above all interested in reliable deliveries of oil and natural gas. Iran is also poised to become an important transit country for China’s One Belt, One Road initiative

Andreas Zumach
is a Genevabased journalist for the Berlin daily taz. 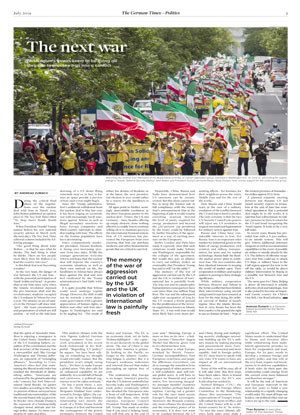