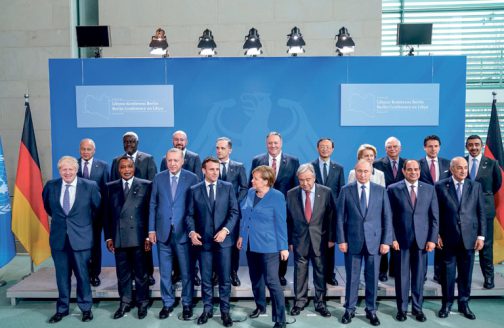 A picture paints a thousand words: The EU's Michel, Borell and von der Leyen were relegated to the back row.
Credit: picture alliance/SULUPRESS.DE

One image can speak volumes. The participants at the Libya summit in Berlin take their places on the podium for a group photo. Positioning themselves at the front are representatives of the proxy powers behind the Libyan civil war: Russia, Turkey and Egypt. Alongside them are the neutral conciliators, United Nations Secretary-General António Guterres with summit host Chancellor Angela Merkel. The German chancellor sent out the original invitation as an honest broker for Europe, which has a vital interest in peace in neighboring Africa as well as in migration issues.

Merkel is not the only European head of government in the front row. Next to Merkel stands French President Emmanuel Macron, beaming at the photographers, and on the far right is the jovial Prime Minister of the United Kingdom, Boris Johnson, whose country has just left the European Union. All the while, the official representatives of the EU find themselves far from front and center. In the photo, it is not easy to make out EU Commission President Ursula von der Leyen, while High Representative of the Union for Foreign Affairs and Security Policy Josep Borrell is also relegated to the second row – the courtesy seats for the also-rans.

The triumvirate of the EU’s “big three” assembled in the front row has a name of its own: the E3 format, in the style of the G7. The world’s seven major industrial nations act in formation, and so, too, does the E3. Future foreign and security leadership will be the task of the largest European states, with France and the UK as notable military and nuclear powers and Germany as the strongest economic nation and political constant on the continent.

A few days earlier in a speech at the London School of Economics, German Defense Minister Annegret Kramp-Karrenbauer made clear that this current picture is more than a mere snapshot: “The E3 format is an important future link between the mindsets of the EU and NATO. It is more than just another format,” she explained. “It is based on the fundamental conviction that working together makes us stronger. Each one of us is a strong, free and sovereign nation. We will remain free and sovereign, but we will only become stronger if we find more points of contact.” The E3 stands for a European security partnership that enables “people with different national backgrounds to work together towards a common goal. Like our soldiers do in training and on operations.”

Is this the format by which a new European power geometry will come into focus? Could this be a format that exists in addition to the EU and as a force beyond NATO? German European policymakers are skeptical: “The E3 will not be able to replace the common EU foreign and security policy, as this represents all of the all member states,” said Alexander Graf Lambsdorff, vice-chairman of the Free Democratic Party (FDP) in the Bundestag and former member of European Parliament. “The joint policy of the Union takes priority. The UK will participate on a case-by-case basis.”

The E3 group, which the Europeans used to successfully negotiate the first nuclear agreements with Iran in 2003 and 2004, may succeed in keeping the British on board the European ship following Brexit. While simultaneously anchored to NATO, the format allows the big three to demonstrate military, diplomatic and economic muscle; the proof that Europe has more to offer than an EU comprised of brokers and negotiators. “While others arm themselves, the EU believes in treaties and agreements,” said one Brussels diplomat with regard to the decades-old dilemma that the EU is an economic giant yet a political and military dwarf.

With no further steps toward political integration, the European community of states will struggle to free itself from this paradoxical situation. On the contrary, although the EU has enjoyed increasing global recognition as a trading power in recent years, it has also lost political influence. The rules-based EU system, which is tasked with substituting political power legitimization with treaties and negotiations, comes up against its limits when there are fundamental differences of opinion.

The euro and migration crisis between 2008 and 2016 revealed fault lines and frailties within the community. Between north and south, the question of social cohesion remains unresolved. In attitudes towards migration and borders, there is a deep and as yet unbridgeable fissure between east and west.

In any case, the Union has precious little foreign policy credibility; the principle of unanimity and veto, which quickly leads to paralyzing logjams caused by individual states, adds to an overall picture of disharmony.

The newly created position of High Representative of the Union for Foreign Affairs and Security Policy has done little to alleviate this flaw. In Syria, Iran, Iraq as well as in the conflict in Libya, the EU has remained absent, leaving the field to new geopolitical players such as Russia and Turkey. “Here, Europe is a nothing, it is pointless,” railed Joost Hiltermann, the program director for the Middle East and North Africa at the Brussels think-tank International Crisis Group, an NGO affiliated with Human Rights Watch. The EU has “neither the foreign policy backbone nor the will.”

In an interview with the German weekly Die Zeit, former President of the European Commission and former Prime Minister of Italy Romano Prodi took the EU to task on the question of Libya: “If you turn yourself into a sheep, the wolf will have you for dinner.” Today, he argued, the task is to “develop a vision for Europe’s role.”

However, such a vision already exists. During Prodi’s time in office in Brussels, the decision was made to establish a European Defense Union, including a European Army. That was back in 2003. As of 2020, neither the defense union nor the European army has yet been implemented.

But there are prospects. In addition to the “Green Deal” for the climate and the digitalization of the European economy, Commission President von der Leyen declared that the third major priority of her “geopolitical” Commission would be to carry greater weight in the world for the EU. “Credible military capacities” are needed, she said, as is “hard power,” adding that they should also be coupled with “diplomacy, conflict prevention, reconciliation and reconstruction.”

For French President Emmanuel Macron, however, this colorful Brussels wish list does not go nearly far enough. Macron, who launched what his advisors call his “disruptive strategy” last fall with the jolting description of  NATO’s “brain-death,” is now embracing his role as Europe’s *enfant terrible.* He has drawn even more attention by calling for a renewed partnership with Russian President Vladimir Putin, thereby immediately alienating the Baltic EU states and NATO members, who see their solid borders with Russia as a guarantee of their existence.

Macron’s most recent coup is the initiation of a “strategic dialog with EU members on nuclear deterrence” under the French nuclear shield. He had already campaigned for a new partnership with Poland in the past, in military terms as well. For his neighbors in the east, he proposed not only the construction of the first nuclear power station under French oversight, but also participation in Franco-German armaments projects such as joint tank construction.

These ideas had previously been rejected by Germany. In contrast to Berlin, Paris thinks in geopolitical categories; French foreign policy defines long-term interests and spheres of interest on the basis of geography and history.

Brexit will undoubtedly shift the foreign policy clout of the EU in favor of French influence. At the Libya Conference in Berlin, Macron cheerfully positioned himself under the E3 umbrella. Should the trio prove its potential as heavyweights in Europe, it will likely push the pallid EU foreign policy even further into the background. Unerring advocates of the French method of “variable geometry,” in which changing political pairings are welcomed for their respective purposes, will barely intrude on Macron’s visions.

In Warsaw, the French extended yet another invitation for bilateral cooperation, in this case a new configuration of the European Intervention Initiative (EI2), a military cooperation of strong European states under French leadership. Since the commencement of the EI2 in summer 2018, the military general staff of nine EU countries plus the UK has adopted this formula as it works on a “strategic culture” and “military doctrine.” The cooperation is aimed at a rapid military crisis response.

Creating a more robust Europe is the goal of the many initiatives that have emerged. But as long as these individual measures remain unbundled, the continent will remain unmanageable. The old US dream of a single telephone number for all of Europe could hardly be farther from reality.

Alexander Lambsdorff has some advice on whom to call: “Not a Berlin number in any case,” joked the liberal politician. Germany’s grand coalition was “worn out on the one hand, chaotic on the other,” he noted, whereas a formative policy role and fresh ideas are clearly emanating from Paris at the moment. “Nevertheless, I would also advise US Secretary of State Mike Pompeo to make a call to the EU High Representative in Brussels.” According to Lambsdorff, this is the only place where one can find out what Europe is thinking “as a whole.” After all, Europe and the EU are far more than just the big E3. 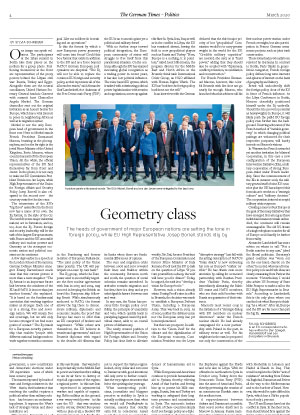