Eastern and western Germany continue to drift apart in political terms, despite economic achievements (i.e., growth, employment, wages, pensions, etc.) in the former states of the GDR. While voters in the West are increasingly going green, voters in the East are leaning toward blue: the right-wing terrorist group NSU was based in the eastern city of Jena, the anti-immigration movement Pegida with its militant marches and unabashedly racist slogans has its origins in Dresden and Leipzig, the right-wing AfD party has enjoyed one electoral success after another, often winning more than 20 percent of the vote in the five so-called “new” federal states (comprising the former GDR territory). Concerns are growing as to how long this situation will continue and whether it might even take a turn for the worse. What’s going on in the East?

The prevailing and essentially western German narrative blames the GDR for the malaise, attributing it to the knock-on effects of the second German dictatorship.

After 1945, the argument goes, unlike the citizens of West Germany, people in the East stumbled from one totalitarian regime into the next within a short period of time. Both outwardly and inwardly, they adapted to the customs and norms of a largely “closed society,” developing a collective habitus that bore unmistakably authoritarian characteristics.

After the upheavals of 1989, the argument continues, eastern Germans were unexpectedly thrown into an “open society,” a shock to the system that prompted them to cling to their mental legacy as a means of coping and surviving. By doing so, however, they prevented their own inner arrival in the West, their integration into the “liberal democratic basic order.” Their aversion to new things, foreign things and foreign people, their phobias, their latent and occasionally manifest racism – all of these, so the story goes, are expressions of the fact that eastern Germans continue to schlep around the heavy baggage that they acquired during the GDR and have refused to discard ever since.

The question arises as to why this toxic legacy was not disposed of over the course of the past three decades of joint eastern and western German history, or if not entirely removed, then at least worn down a bit. This question is aimed directly at the ability of the new, post-1989 German society to win over eastern Germans and gain their support. The idea of avoiding this chapter in history by simply skipping over it as if it weren’t worth a closer look – and instead stubbornly continuing to blame the GDR as the sole cause of the malaise will only exacerbate the discord.

To be sure, up until 1989, East Germans lived in an ethnically and culturally homogenous society. Its precipitation into economic globalization as well as cultural and religious diversity was often unsettling, and it led to defensive reactions that escalated for the first time in the early 1990s. The fact that it was mostly adolescents and young adults at the forefront of these xenophobic attacks points indeed to the GDR as the source of the behavior.

However, as time leaves that era ever further behind us, the more problematic this ascription of blame to the GDR becomes. The average age of eastern Germans today is well below 50; most have lived the majority of their lives in a post-Wall world. Some of the people taking their conservative and right-wing extremist sentiments to the streets have actually lived their entire lives in the new Germany.

Anyone who insists on attributing the behavior and attitude of eastern Germans solely to the legacy of the GDR makes a threefold mistake. First, they would be infantilizing eastern Germans by declaring their experiences since 1989 to be irrelevant, as if their living conditions after the GDR have left no psychological traces whatsoever. Second, they would be guilty of a one-dimensional interpretation of the GDR’s heritage, labeling it as a handicap and burden rather than as a legacy in all of its contradictions. And, finally, they would be justifying the mistakes and injustices that were part and parcel of the upheavals after 1990, which threw countless people either temporarily or permanently off track. The notorious disregard for post-Wall history, especially when looking for the root causes of the “susceptibility” of eastern Germans to right-wing ideas, does enormous harm to the process of unification.

To this day, the stories told by most of the eastern Germans who experienced the initial years after the fall of the Wall still revolve around the historically unprecedented economic laceration that occurred immediately after they joined the Federal Republic. In large swaths of the country, life atrophied and social cohesion dissolved. The familiar foundations of social interaction crumbled, leaving many with a sense of having been left behind, of being lost in oblivion.

Those who still wanted to make something of their lives looked for ways to leave, which is precisely what millions of eastern Germans have done since the early 1990s. Individuals who kept their jobs or found new ones considered themselves lucky and – as a result of this privilege – often in non-unionized workplaces. Everyone else faced the threat of precarious employment, the trap of ongoing training measures as a substitute for employment or unemployment – hence the great metamorphosis from citizen to employment-agency client, a monumental insult.

The experience of former East Germans is similar to that of hundreds of millions elsewhere, most of whom never lived in a dictatorship, but were subject to the same structural upheaval, stretched out over time. In the US rust belt and in the traditional industrial regions of England and France, for example, the same profound economic and social transformation occurred and produced the same results: a mass alienation of citizens from democratic institutions, procedures and processes along with the attendant rise of nationalist, vulgar and populist tendencies and parties.

Basic democratic rights, ties to the West, the social market economy – these were the pillars upon which the Federal Republic of Germany was built and flourished. The democratic framework of West Germany stood on a firm foundation that proved sustainable. Things continued to improve, and the longer the economic upturn lasted, the more people became convinced that they had done well for themselves on the whole. As a result, people were happy to live within the political and legal framework of the new polity.

The German-German unification process after 1990 turned this sequence on its head in the East. Democracy had been fought for from the bottom up; reunification had been approved of by a majority of Germans and pushed forward against all objections and second thoughts. Yet, no sooner had the primary goal been achieved – guaranteed basic rights and elementary freedoms for all – that millions of eastern Germans lost their economic and social footing. A gain in political and legal self-determination often went hand-in-hand with a loss of socioeconomic self-determination. The terrain upon which people had been moving started giving way, and this is precisely what undermined any identification they might have had with the framework in which they were now being asked to move.

The refugee crisis of 2015 caused this well of discontent to overflow. “Everything has been decided and implemented over our heads,” people cried. “Treuhand policies, Hartz laws, bank bailouts, open borders for migrants. Enough! It’s our turn to speak.” And, lo and behold, a stream of politicians, journalists and scientists suddenly made their way to the East – the place they’d disregarded for so long – to find out what was going wrong. In light of the growing attention they were getting, those who until then had been ignored mused: “We obviously did something right this time. This is exactly why we protested so radically. We wanted to make people aware of our situation, of the misery that reigns here.”

The lesson we should take from this process is simple to understand. The top priorities of a social transformation as radical and all-encompassing as that which took hold in eastern Germany after 1990 are to foster and fortify the strength and resources of the people. And this clearly does not reflect the eastern German experience after the Wall came down. The rapid socioeconomic demobilization of eastern Germans was a disaster that should not have been allowed to happen. The long-term consequences of that failure are now affecting the entire country.

A public debate about these failings, without reservations or assignment of blame, is of utmost importance if we are to keep things from spiraling out of control.

Wolfgang Engler
is a cultural sociologist. He was rector of the Ernst Busch Academy of Dramatic Arts in Berlin from 2005 to 2017. 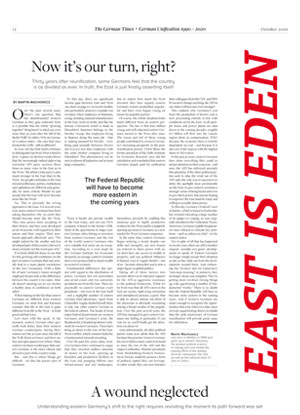