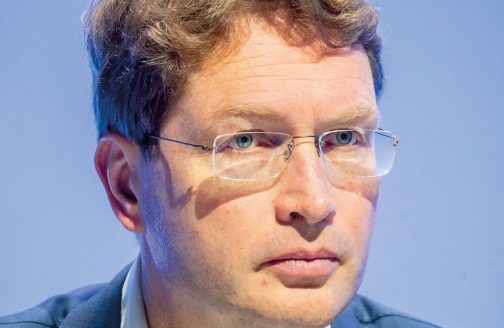 Ola Källenius seemed to be in an almost motionless state as he watched what was likely the most important moment in his career. Roughly 5,000 people had traveled to the annual shareholders meeting in Berlin to witness Daimler CEO Dieter Zetsche hand over the reins to his successor at the venerable automaker. The meeting marked the end of Zetsche’s 13-year reign, and while the auto world’s most famous mustachioed man was saying goodbye, Källenius – who had until that moment been head of research at the company – looked out into the Berlin exhibition hall with a dry and focused stare, allowing himself only the hint of a smile.

Källenius’ facial expression was a perfect fit to the current state of the company he now oversees as chairman of the board of management. The 50-year-old Swede speaks fluent German, is seen as a hard and unrelenting worker and, although he studied business administration and majored in finance, has earned himself the reputation at Daimler of being a “car guy,” who knows his way around both old and new technology.

Källenius’ management career at Daimler reflects this standing. After 20 years at the company, he first moved onto the executive committee as sales and marketing director in 2015, and only two years later took over the research and development division. And his focused stare is going to be absolutely necessary given the task ahead for Daimler – and thus also for its new CEO.

“We’re going to have to change – without forgetting who we are and what our customers and shareholders expect of us,” Källenius informed his employees the day after taking up his new position. He argued that Daimler’s business had to become more sustainable while at the same time remaining profitable. Most important of all, said the new CEO, is the transformation of “our company.”

First: The automaker will be adopting a new structure that is set to come into effect starting in November. Three independent joint-stock companies will be bundled under the umbrella of what until now was Daimler AG, divvying up among themselves the previous business areas of passenger cars, vans, busses and trucks. The already existing Mercedes-Benz AG will handle the manufacturing of premium cars and vans; the new Daimler Truck AG will handle trucks and busses; and, finally, Daimler Mobility AG will focus on financial services and promising future business areas, i.e. modern mobility services such as car-sharing and ride-sharing services. The “old” Daimler AG will act as a holding company responsible for steering the joint-stock companies and determining their strategy.

Although at first sight this might appear to be a purely administrative exercise, it is, in fact, a highly complicated undertaking. After all, according to Daimler, roughly 800 individual companies in more than 60 countries will be affected by the change. In addition, the roughly 130,000 Daimler employees in Germany are going to have to reorient themselves, as they will be shifting from Daimler AG to the newly formed companies. All of this will have to be well planned in advance and is likely to cost more than €600 million.

Of course, the automaker will be looking to win back this initial investment over time. The company expects its new structure to produce an increase in efficiency; and each individual company will be able to act more flexibly and enter into partnerships more easily, thus generating new growth for the entire group.

Second: However, before that moment comes, Daimler needs to save – and this is Källenius’ second challenge. Over the past decade, the automaker has increased its sales year after year from roughly €79 billion in 2009 to more than €167 billion in 2018. Earnings were also impressive in this period, reaching the targeted return of more than 8 percent in the years from 2013 to 2017.

Last year, however, the company sustained a hit when earnings before interest and taxes (EBIT) fell to just over €11.1 billion, which corresponds to an operating margin of 6.7 percent. This is less than other automakers earned and far too little to meet Daimler’s aspirations.

The goal now is to neutralize this blow. However, as car sales are lagging at the moment, the company is looking first and foremost to lower its costs. MOVE is the name that has been given to the efficiency initiative Källenius must now implement. “We are going to have to become more Swabian,” he said in early June, invoking the proverbial southeastern German housewife with a reputation for being economical, prudent and efficient. Rumor has it that up to 10,000 jobs will be cut; the austerity program will now most likely proceed without an active severance pay program for employees willing to go. In any case, Daimler employees already have a program in place that protects against operationsrelated redundancies until 2029.

Third: In light of such efforts to cut costs, the third challenge facing the new Daimler CEO could necessitate squaring the circle. Källenius will have to steer his company into the era of electromobility, and this will require a large initial investment.

The first step in this direction has already been taken with the first fully electric Mercedes-Benz, the EQC urban SUV, which will be followed by at least nine additional battery-operated vehicles under the EQ brand by 2022. Daimler is spending more than €10 billion to make this happen.

What’s likely to cost even more is meeting Källenius’ long-term goal of making Daimler’s entire fleet of new vehicles carbon-neutral by 2039. “It’s not that we‘re looking to institute a sustainability strategy as a supplement to our regular operations; our entire business strategy has to be sustainable,” says the man now running a company whose founding fathers Carl Benz and Gottlieb Daimler invented the internal combustion engine 133 years ago.

Källenius is well aware of this admired tradition, yet it is not something he considers sacrosanct. Back in May, when he presented his plans for sustainability, he put forth the following guiding principle: “Don’t be afraid to question everything.” It looks as if the chief executive himself will be the one fostering constant self-questioning – with a dry and focused stare, of course.