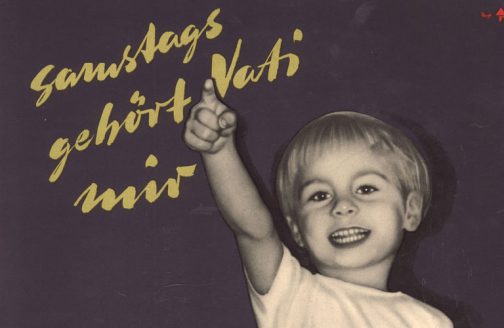 It’s quite possible that the German Train Drivers’ Union (GDL) has made more enemies than friends in recent years. In 2014 and 2015, it repeatedly called for widespread, all-day strikes in an attempt to achieve higher wages and better working conditions for its roughly 35,000 members – locomotive drivers and other railroad personnel. “All engines cease without your elbow grease.” In this case, the defiant workers’ slogan was quite literally true.

The result of the union’s actions was chaos in passenger transport and delays in the delivery of goods. Still, those citizens affected by the strikes displayed a degree of understanding. How else were railway employees supposed to assert their interests when the company’s management refused to budge?

Strikes are the ultima ratio – or last resort – when attempting to push through workers’ interests. And they only succeed when a large enough number of workers in a specific sector form a union and when, in addition, those unions pull together and have the sufficient means, funds and logistics at their disposal to withstand long labor disputes.

This is how unions work, at least in theory. In practice, they often function as ideological competitors. Sometimes, if they lack any real punch and financial strength, they end up squandering their reputation through crooked business deals, cronyism with employers’ organizations and the general arrogance of functionaries.

The consequences of this kind of bad behavior are “wild strikes” that unions cannot control along with a reduction in the number of members and the collapse of the “tariff system.” This means that workers are then left to fend for themselves on the labor market, which is an urgent problem when unemployment numbers run high and the economy falters. Then things get even worse in the case of longer-term economic crises.

The GDL, a comparably small union with only 35,000 members, just turned 100 years old. For its part, the German Trade Union Confederation (DGB), an umbrella organization of German unions (of which the GDL is not a member), was founded 70 years ago. Trade unionists in Germany were persecuted during the chancellorship of Otto von Bismarck (1871–1890) and in particular during the Nazi era, with many of them sent to concentration camps.

Still, unions have been a fundamental part of Germany’s social fabric since the mid-19th century. And it’s not only at anniversary events and Sunday speeches that employers’ associations and political parties praise them for their constructive contributions to the “social partnership” between workers and employers. In Germany, this partnership has often led to the peaceful handling of labor disputes, and an umbrella organization such as the DGB has been able to balance out ideological differences between social-democratic reformers, system-critical communists and Christian labor movements just as effectively as between representatives of wage earners and salaried employees – two groups that continue to march separately in other countries, such as France.

When locomotive drivers joined forces in a union 100 years ago (the predecessors of the GDL had already done so in 1867), they formed a kind of workers’ aristocracy. Back then, this was generally true for all founders of labor associations, most of whom were skilled artisans and self-confident representatives of their craft looking to defend themselves and others against the increasing effects of Manchester capitalism. In the subsequent era marked by Taylorism and assembly-line work, mass organizations were essential to the livelihood of unqualified industrial workers, who often made their way to cities as migrants from the countryside. After all, only a large number of members conjuring up the threat of work stoppages was able to shift the unequal relations between capital and labor in their favor.

In the end, unions proved themselves to be organizations that functioned in the overall interest of capital. Even though they had started out as anti-capitalist bodies, it was they who dismantled the feudal structures that had reproduced themselves in large capitalist companies. For a long time, mediumsized, family owned and operated companies, in particular, fostered a strong aversion to workers’ organizations. In the course of industrialization, by dint of the social welfare state, and often driven by left-wing workers’ parties, labor unions fought for and achieved a relatively high level of income, job security and economic inclusion for the lower social strata. Only in this manner was it possible to secure for those people, whose manual labor and brainpower contributed significantly to the creation of social wealth, their fair share of progress, productivity and prosperity.

There are a number of other items on unions’ list of things they can take credit for: long weekends – that is, Saturday and Sunday off, sufficient vacation time, sick pay, bad weather allowances for construction workers and, last but not least, “equal pay for equal work” between men and women and a right to receive ongoing professional training. As a rule, unions are usually also strong supporters of democracy as a political system and way of life.

This idealized image of unions reflects the situation in northwestern European societies marked by a high degree of unionization, workers’ parties capable of both compromise and governance as well as an unquestioned commitment to the social welfare state. Still, even in many European societies, the “social partnership” model was long frowned upon, and workers’ main weapons were those “wild” labor battles carried out in confrontational class-based societies and corporative states.

It’s interesting to note that unions in the former Soviet bloc ended up discrediting their own positions as agents of the “dictatorship of the proletariat” (which was, in fact, a dictatorship over the proletariat). It is no wonder, then, that the level of unionization elsewhere was and continues to be lower than in Germany.

This has always been the case in the United States, a country that has seen its share of tough labor disputes. In 1960, less that 30 percent of workers were organized in unions; by 1980, that number had dropped to 20 percent and most recently it declined even further to only 13 percent, most of the remaining members being public service workers. By comparison, in Sweden, the organization rate hovered consistently at 70 to 80 percent. In Germany, the percentage was around one-third for many decades; today it is still double the number found in the US.

The overall decline in union membership is a worldwide trend. In many OECD countries, and especially in France, the downturn has been particularly strong. This is also due to the fact that the labor environment is undergoing yet another significant transformation, this time as a result of automation and customization. Industrial labor is being pushed into the background, while service sector employees increasingly believe they can do without unions and thereby save themselves the membership fees.

Moreover, there have been recent phases of intense political hostility to union activities, most notably in the UK under Margaret Thatcher. Any form of worker solidarity was frowned upon in favor of a neoliberal understanding – especially in the Anglo-Saxon world – that labor relations were a private matter and exclusively the realm of individual negotiations between employers and employees. Indeed, more and more companies are turning their backs on their associations and abandoning collective agreements.

From this perspective, the social welfare state itself is seen as a bloated bureaucratic apparatus that weighs down the free play of market forces and creates privileges for some and a culture of dependence for others.

It is worth noting that real wage levels in countries without any counterforce coming from unions stagnated the most and even shrank in the past three decades. Social support in the event of illness and the prospect of decent retirement years also nosedived.

According to the latest surveys issued by the US Bureau of Labor Statistics, the median salary among full-time unionized workers was $1,051 per week and $860 for nonunionized workers. While civil service workers, such as members of the police force, firefighters and teachers, are relatively well organized, the level of union organization in the realms of finance and food services is at a miniscule 1.3 percent. And while 22.3 percent of New Yorkers belong to a union, that number is not even 3 percent in North and South Carolina.

It is highly unlikely that workers will be able to successfully navigate the current boom in automation entirely on their own. Unions are not perfect, of course. German locomotive drivers have been accused of being responsible for another deformation of labor relations; they have the power to obstruct transportation – something that millions of people rely on every day. In a manner similar to air traffic workers and certain health care and IT sector jobs, these people can take the rest of society hostage, as it were. Some have argued that this results in specific advantages for highly paid professional groups at the expense of the majority of workers and the general public.

The risk of this kind of chaos diminishes, however, when unions organize themselves into federations and workers organize themselves within their respective industries. Overall, unions are seen as positive influences, but there is still much hesitation with regard to workers’ own willingness to join, just as in other mass organizations.

A global perspective reveals another problem. As solidarity today more often than not ends at national borders, the unions that are active in rich countries often react with no more than a shrug of the shoulders when confronted with the exploitation and discrimination of workers in the global South. Moreover, the inclusion of migrant workers – a long unpopular group that many felt was responsible for downward pressure on wages – has progressed very slowly. In the countries of the global South, unions are often banned and vilified, and active trade unionists persecuted, arrested and killed. Cross-regional associations such as the International Trade Union Confederation, which had 331 unions from 163 nations and roughly 202.3 million members in 2017, have not been able to effect much change to date.

This is in no way meant as an argument against trade union organization in rich countries. In addition to the social welfare state, unions have proved themselves to be one of the few forces able to counteract a further intensification of social inequality and prevent the income and wealth gap between rich and poor from becoming even greater. They provide opposition to neo-feudalistic tendencies in today’s world of finance capitalism and are probably the only groups at least beginning to be concerned about ensuring decent jobs in the digital economy. This can be seen, for example, in attempts to ensure that packers and drivers working for Amazon and transport companies, as well as care workers, hotel maids and other underpaid laborers, receive adequate remuneration for their work. In this new era of massive transformation, we need unions like never before.

Claus Leggewie
was a professor of political science from 1989 to 2007 in Gießen. From 2007 to 2017, he was director of the Institute for Advanced Study in the Humanities (KWI) in Essen. He is co-publisher of Blätter für deutsche und internationale Politik. 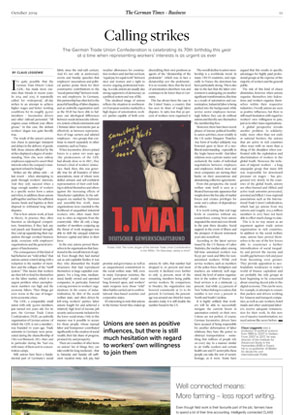